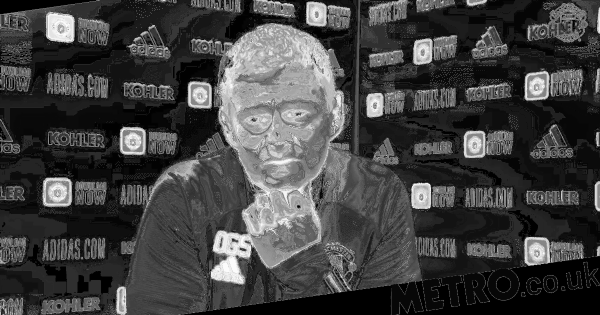 Ole Gunnar Solskjaer has defended his decision to wait until the 75th minute to make a substitution in Manchester United’s Carabao Cup semi-final defeat to rivals Manchester City.

The Red Devils started the match brightly but second-half goals from John Stones and Fernandinho saw the visitors secure a 2-0 win at Old Trafford and progress to the final at Wembley in April, where they will take on Tottenham.

Despite trailing in the match and struggling to create chances, Solskjaer only made his first change – Scott McTominay off for Mason Greenwood – with 15 minutes left to play.

He made just one more switch, bringing on Donny van de Beek for Fred in the 88th minute, with many fans questioning why Solskjaer took so long to change things up, but the Norwegian was happy with the pressure being exerted by his starting line-up.

Asked why he waited so long to make a substitution, Solskjaer explained at his post-match press conference: ‘After they scored I felt we took five minutes to get back into the game, into the swing of things, but then we put some more pressure on them.

‘We started to build more momentum but just didn’t have that edge, that extra quality to get the goal.

‘So it was about who do you put Mason on for, because you know Mason can create something out of nothing.

‘But the feeling was that we did put them under some pressure, they did make subs as well, so it was a moment to wait for that one.’

Had he not been serving a three-match ban, Edinson Cavani likely would have been involved – either from the off, or as a sub, against City – and Solskjaer feels the Uruguayan’s absence did hurt United’s attempts to get back in the game.

He added: ‘Well any team would miss Edinson’s impact because Edinson could have of course caused some havoc in there with his movement and his presence in the box.’

The former PSG striker bagged a match-winning brace off the bench earlier this season against Southampton to secure three points for United and has been used frequently by Solskjaer in the Cups.

Adrien Rabiot 'tells Juventus he is on STRIKE' amid salary cut