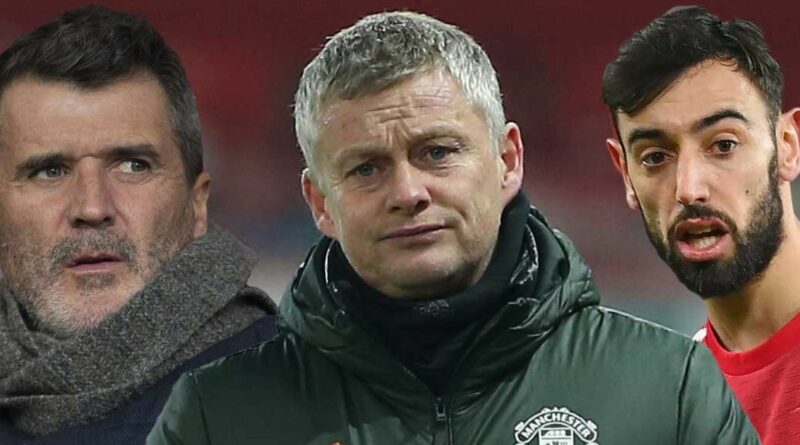 Roy Keane hit out at the Portuguese following United's 2-0 defeat at the hands of rivals Man City, in the semi-final of the league cup.

But Solskjaer has leaped to the defence of the midfielder, saying the whole team is responsible for failing to progress to the final.

"It's not just about Bruno not finding inspiration," Solskjaer said. "It's about the whole team creating chances and when you play against good teams – Man City played well tonight – you have to be spot on and you have to earn the right to create chances.

"We had some moments in the first-half on the break, second-half it was more about pressure but we didn't create big chances. Anthony had a couple of half-decent ones but we just didn't have enough in the last pass or last finish.

"I felt first-half we defended really well, they posed us some problems but we kept them away from our goal quite well. They had one shot that hit the post, we had one shot with the save from the keeper from Bruno.

"After they scored, I felt we had more of the ball, more of the pressure but still couldn't create enough. Possession counts for nothing but first-half they had a lot more possession of the ball than we had.

"We looked dangerous on the counter-attack but Marcus was offside or the ball came a little bit late a couple of times."

Keane spoke out about Fernandes shortly after the final whistle on Sky Sports on Wednesday night, and explained why he shouldn't be compared to Eric Cantona.

"You know Fernandes has had great praise and over the past few months people have been comparing him to Cantona etc. But Cantona… Fernandes didn't really do much tonight," said Keane.

"The top players turn up in the big occasions. That's what the Cantonas used to do, get their hands-on trophies. And that's where this team is a little bit short.

"They probably need to have one or two more players come into the squad no doubt and the mentality, maybe they need the confidence of winning a semi-final to get them over the line. Then you get momentum."