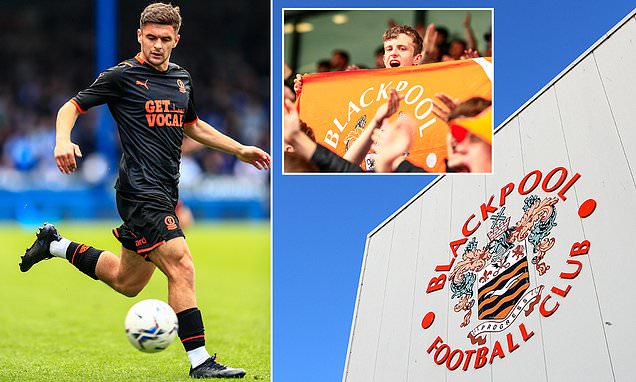 We’ll look after Jake Daniels, English football is FINALLY ready for this: Sportsmail visits Blackpool, a town proud of its teenage footballer emboldened to blaze a trail for gay players

There were community classes going on in one corner of Bloomfield Road on Tuesday morning, held with the town’s famous tower as a backdrop, dominating the skyline through the glass.

That corner of Blackpool’s stadium used to be a ticket office but now houses the education centre and community trust headquarters.

Employees came and went, going about their Tuesday as if this one aspect of this one football club had not contributed to the most uplifting story of the year. Or of any year.

You will know Jake Daniels by now. He is 17, he is Blackpool academy’s top scorer with 30 goals and a Blackpool supporter.

With the club since he was seven years old, he was born just up the coast in Bispham and made his senior debut earlier this month.

He also happens to be gay, the first professional in this country to come out since Justin Fashanu in 1990. 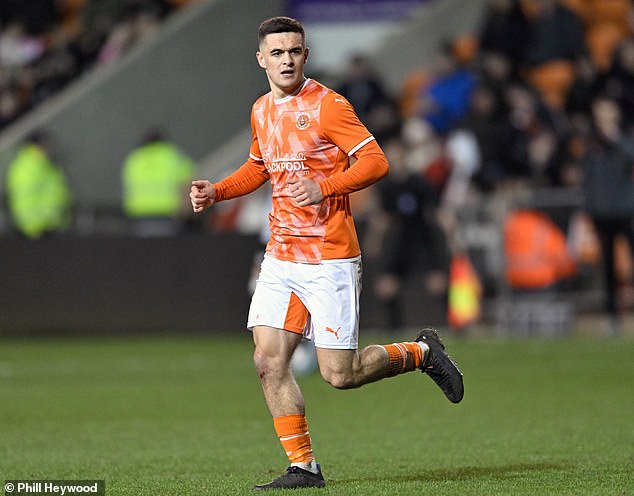 ‘About time,’ one NHS mental health worker said outside the ground as she went for lunch.

Daniels is, as the club’s supporters’ trust spokesperson Christine Seddon put it, ‘a trailblazer’.

And the people of this area — up to Fleetwood and down to Lytham St Annes — are exceptionally proud of him for that. Fans know his family, they feel a connection with his story. 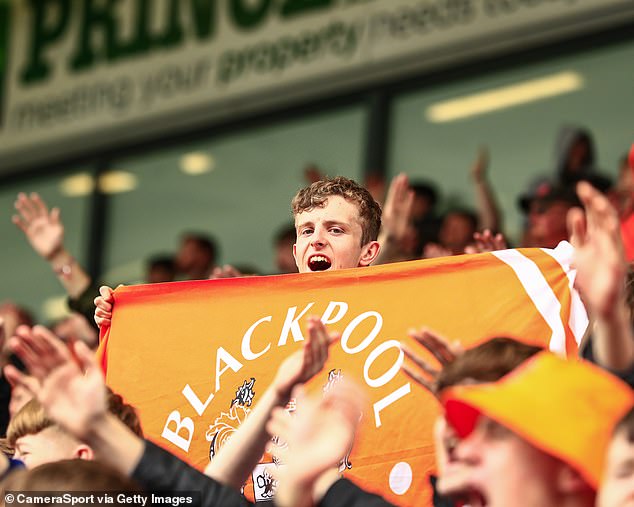 Some have watched him blossom for the Under 18s this season after he briefly dropped out of the game, truly bursting on to the scene as he became ready to reveal his sexuality.

They talk about how offers from much bigger clubs were rejected so Daniels could remain part of an environment in which he felt comfortable. It is an environment that has emboldened a teenager to speak his truth.

Daniels — who is still only of first-year scholar age despite his pro contract signed in February — confided in Blackpool’s welfare officer Will Cowell.

And from the turn of the year the EFL, with Stonewall, facilitated the arrival at this landmark moment alongside his family.

The Seasiders requested additional LGBTQ+ education sessions from League Football Education (LFE) — established by the EFL and PFA in 2004 — in the months prior to Daniels telling his team-mates, who were overwhelmingly supportive. It proved invaluable preparation. 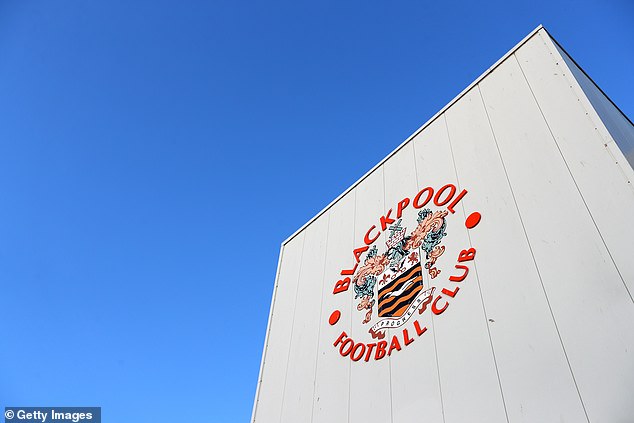 ‘Jake drip-fed it into the captain, one or two of his closer mates within the squad, and the information worked its way out to the rest of the team,’ academy director Ciaran Donnelly said.

‘I think it’s a mark that it stayed in our environment, it could have become a big story out of our control.

‘But the respect and the love for Jake within the group made it the perfect environment for him to do this.’

Academy products are delivered sessions on societal issues and the level of awareness and discussion is increasing each year — and so too are the numbers of hours dedicated to them by clubs. 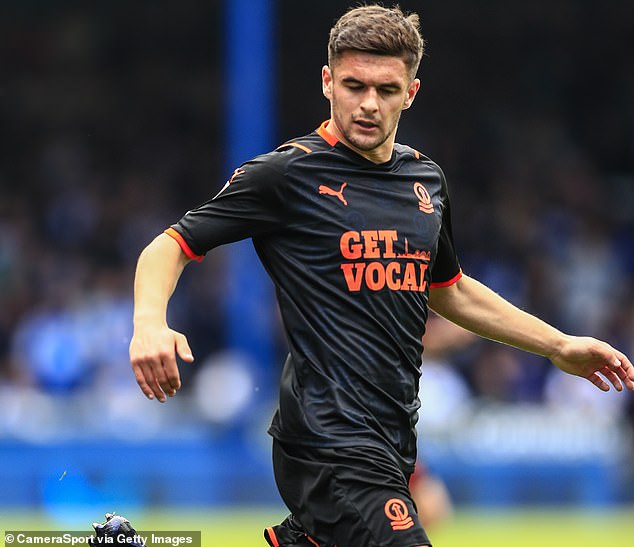 Male pro footballers who have come out as gay

The first professional football player to come out as gay was Justin Fashanu who came out in 1990.

Fashanu made his pro debut with Norwich City in 1979 and played for a handful of clubs including Nottingham Forest and Brighton & Hove Albion.

He went on to become the first black footballer to command a £1 million transfer fee from Norwich City to Nottingham Forest.

A serious knee injury took him to the US for treatment and he played for a handful of North American sides before he returned to England in 1990. He then bounced from Leyton Orient to non-league Southall and then Leatherhead, a semi-pro club.

Later that year, he came out as gay, becoming the first prominent football player in England to do so.

Fashanu took his own life eight years later in a garage in London at the age of 37.

He remained the only player to have competed in England’s top tiers to come out as gay until Jake Daniels’ announcement today.

Josh Cavallo, 22, who plays for Australian team Adelaide United, came out as gay last year to then become the only out pro in the world.

Cavallo became the first known current top-flight male football player in the world to come out as gay in October 2021.

In an emotional and widely-praised video, he said was done with feeling ashamed about his sexuality and the exhaustion of trying to live a ‘double-life’.

‘I’m a footballer and I’m gay,’ the 21-year-old said in the clip posted on Adelaide’s social media and in a statement posted to his Instagram page, drawing support from fellow professionals across the world.

‘All I want to do is play football and be treated equally,’ he said.

Elsewhere in the sport, one of the highest-profile male football players to publicly come out as gay since Fashanu is German footballer Thomas Hitzlsperger.

In January 2014, Hitzlsperger came out as gay one year after he had retired while interviewing Die Zeit, a German newspaper.

Hitzlsperger was capped 52 times by Germany and made appearances in the 2006 World Cup and 2008 Euros.

It is a rarity in team sports for men to announce they are LBTQ+.

Former Wales captain Gareth Thomas was the first active rugby professional to come out in 2009, two years before he retired, and has become a source of inspiration across sports.

One of the most prominent gay athletes in Britain is Olympic diving champion Tom Daley who inspired former England soccer captain Casey Stoney to come out in 2014.

She is coach of the San Diego Wave after managing the women’s team at Manchester United.

More parents than ever are taking interest with their younger age groups. Some personal development seminars have attracted more than 600 parents this season.

Daniels had one-to-one confidential reviews with LFE’s regional officer, Ben Lavelle, something on offer to all Under 18 players, and another sportsman was on hand to discuss his experiences.

‘We’ve had Keegan Hirst, the only openly gay rugby league player, working on our programme,’ LFE life skills manager Simon Williams said. ‘Keegan has a workshop called “Being yourself in sport”.

It felt brave to go into clubs to talk about his journey of coming out — the impact of not doing so and then the impact of making that decision.

‘We linked Keegan up with the club for extra support for Jake earlier this year, because there obviously aren’t any footballers for him to talk to.

‘We’ve worked with Kick It Out for years. Troy Townsend delivers these education sessions with Marcus Gayle.

A third of Troy’s workshop is about homophobia and coming out. He has a really serious conversation about sharing a dressing room together, how they might feel if someone comes out.

These are raw, deep conversations and aren’t taken lightly. I do expect more clubs will want more of this, more often, now.’

Daniels hopes more will follow his lead and that this prompts lasting change rather than just a few wholesome tweets. FIFA’s message of support, for example, jarred somewhat given the location of this year’s World Cup.

‘We’ve been supporting clubs for years and we’re finally at this point where English football is ready,’ Stonewall’s director of programmes, Liz Ward, said.

‘I cannot fault Blackpool for how they have helped him. There’s definitely been a societal shift.’

That was echoed by local resident, Clive Kent, who added: ‘I’ve lived in the town for 18 years and it is very inclusive of homosexuality.’

Ward, however, noted caution: ‘Hate crimes are still increasing, 65 per cent of people feel homophobic language shouldn’t be in stadiums but 35 per cent still think it’s just a joke, banter.

‘We’re under no illusions that there is still a long way to go. Homophobic chanting is embedded into certain parts of football. I hope this has allowed people to have a conversation and learn.’

Daniels is ready for that and there is learning to do among Blackpool’s fan base.

There is no room for the chant, “You’re only here for the gay bars” — often barracked towards away supporters at a weekend — if they are serious about backing Daniels. If a minority do air those words, the majority’s job is to drown them out.

‘We have to show that we have Jake’s back,’ Seddon said. ‘Football has catching up to do.

‘That Jake has the courage and resilience to come forward is not only testament to himself as an individual but reflects well on the club too. It’s fantastic, I feel pride that Jake is a Blackpool player.’

The club’s closest rivals, Preston North End, were keen to add their support.

The Preston Supporters Collective’s Ben Astley summed it up perfectly: ‘He’s come across as a very articulate young man. It’s irrelevant who he plays for.

‘Football is for everyone, we’re clear on that. No barriers.’

Reading 2-1 Luton Town: Alfa Semedo on target as Veljko Paunovic’s Royals get back on track