Tottenham’s title hopes suffered a damaging blow as Wolves came from behind to win 3-1 at Wembley.

Spurs had looked like piling the pressure on leaders Liverpool in the Premier League title race after Harry Kane celebrated his new year MBE in style with a brilliant first-half strike.

But Wolves had other ideas and enjoyed a memorable first visit to the new national stadium as goals from Willy Boly, Raul Jimenez and Helder Costa in the final 18 minutes gave them a deserved three points.

It was a game too far for Spurs, whose relentless run of fixtures finally caught up with them, and they could now end the weekend nine points behind Jurgen Klopp’s side.

A memorable year ended on a sour note for Kane, but his achievements in 2018 deserve acknowledging.

He bagged his 42nd goal in his 63rd appearance for club and country in a calendar 12 months that saw him win the Golden Boot on the way to captaining the Three Lions to the World Cup semi-finals.

Kane would undoubtedly swap all of that for the Premier League trophy at the end of the season, although that now looks a long shot, even if the afternoon started brightly.

Spurs picked up where they left off against Bournemouth and went on the attack early, with Son Hueng-Min shooting just wide before Christian Eriksen’s curling effort brought a spectacular save out of Rui Patricio, who tipped on to the crossbar.

There was nothing Patricio could do, though, to stop Kane’s opener after 22 minutes as the England captain celebrated his new year gong in style.

The hosts won the ball back in their own half and Son fed Kane, who cut inside and unleashed an unstoppable 25-yard effort.

Son fancied a slice of the pie and came close to emulating his team-mate, but his dipping shot from just outside of the area whistled past the woodwork.

If Spurs had hopes of going on and producing another rout then they were disappointed as they fell flat and struggled for fluidity.

Wolves upped their game after the break and a lengthy spell of pressure was rewarded in the 72nd minute with the equaliser.

Boly was unmarked from Joao Moutinho’s corner and powered in a free header, with Hugo Lloris unable to get a strong enough hand on it to keep it out.

Spurs would have been looking for a response, but it was Wolves who finished strongly and they went ahead in the 83rd minute when Jimenez rolled into the bottom corner from the edge of the area.

They killed the game four minutes later after Harry Winks was caught in possession and Costa was put through and converted easily.

Spurs looked a jaded outfit by the end as an impressive 2018 ended with a poor result. 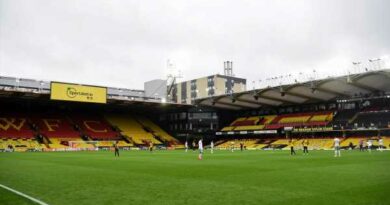