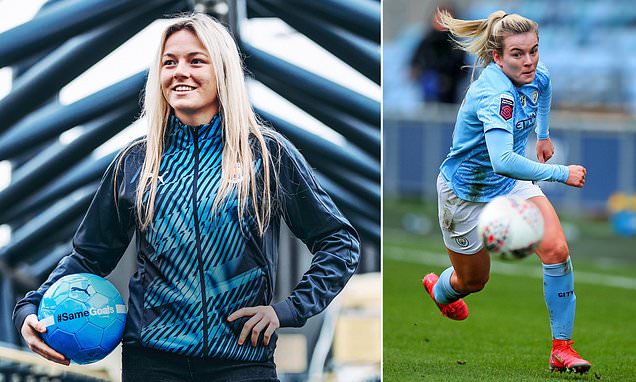 When Manchester City phoned to register their interest in Lauren Hemp she thought it was a prank call.

‘Someone rang me, to this day I’m still not 100 per cent sure who it was,’ Hemp tells Sportsmail. ‘They said: “look, City are interested in you, I’ve had discussions with (then manager) Nick Cushing and they’re really keen to have a chat with you.”

‘I didn’t think anything of it, I thought it was a prank call. I didn’t think a team like that would be interested in me. I didn’t have a clue who this person was so I told my mum. Next thing I know, she’s rang Nick and got him on the phone. She said, “Is this genuine? Lauren has just had a call” and he said, “Yeah, it’s completely genuine”.’ 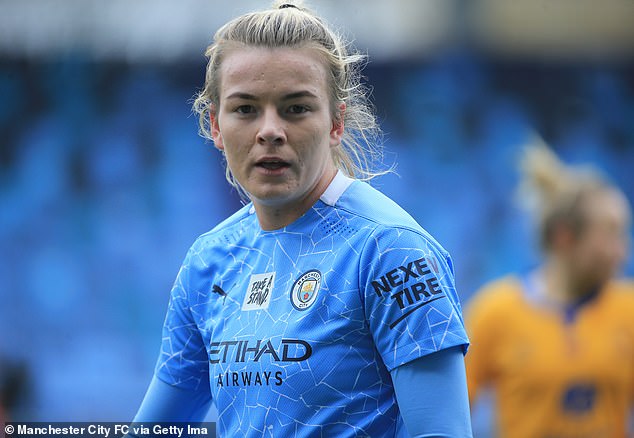 It is easy to understand why it was no joke. The then Bristol City winger had just been named PFA Young Player of the Year for the 2017-2018 campaign and was clearly destined for a bright future. That future is now, as Hemp — who has five goals and five assists in 10 WSL games this season — heads for a Champions League quarter-final against Barcelona on Wednesday.

But it hasn’t always been plain sailing. When Hemp first trialled for Norwich City’s Centre of Excellence aged nine, she didn’t get in — but older sister Amy did.

‘For her to get in and me not to was quite difficult but at that age you just get on with it and pick yourself up,’ Hemp recalls.

And so she did. The following year she made the cut and Hemp played for the club until the centre was closed down when she was 16. That forced her back to her old boys’ team for a year before she joined Willie Kirk’s Bristol City, a move which saw her leave her North Walsham home in Norfolk for the first time.

‘It was hard to begin with,’ Hemp says. ‘I’d go away on tours with Norwich and cry every night and struggle to sleep because I was missing home. I don’t think I realised how difficult it would be at first.’ 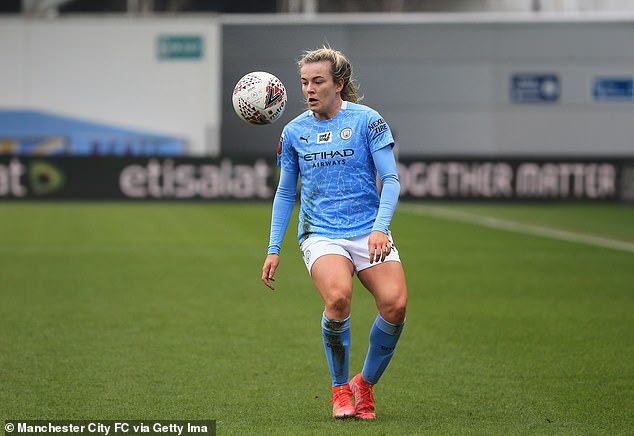 There were no problems on the pitch, however. Nine goals in her first season caught the attention of Manchester City and, following that mysterious call, she hasn’t looked back. Hemp scored within six minutes of coming off the bench in the 2019 FA Cup final at Wembley and made her England debut later that year.

She was ‘raring to go’ at the start of this season but a hamstring injury sustained in the Community Shield kept her on the sidelines until December.

Despite City signing several big-name players, the club started the campaign slowly and were fourth in the WSL when Hemp returned. Since then, Gareth Taylor’s side have won all of their league games and are now second, two points off Chelsea.

Hemp has those five league goals, as well as three in Europe, and scored the winner in the 2-1 win over Arsenal last month — on the same weekend Chelsea lost to Brighton, putting City back in the title race. Her return has been significant, but the 20-year-old is humble when assessing her impact.

‘Chloe (Kelly) put the ball in and it literally landed straight on my head, I just had to be there to guide it in,’ Hemp says of her goal against the Gunners. ‘I play balls to Ellen (White) that somehow she scores from, it’s having those people around me that helps my stats!’

‘I’ve just been lucky that since I’ve been back, Gaz has put his faith in me – even though he hadn’t seen me before I’d got injured, only during pre-season. I’m really grateful and lucky to have that.’

Hemp may shun the limelight but her parents are understandably proud. Their Twitter account, ‘The Hemps’, reads: ‘Proud parents of Lauren, oh and the other one’ — referring to her sister. ‘I don’t think she minds, she knows it’s just a joke. Well I think it is, anyway!’ Hemp laughs. ‘That page might as well just be Lauren Hemp because it’s filled with me. It does annoy me sometimes because I get a bit embarrassed but it just shows how supportive they are.’

They’ll no doubt be watching when City meet Barcelona in Wednesday’s first leg. Like their male counterparts, City’s women have never progressed beyond the semi-finals. 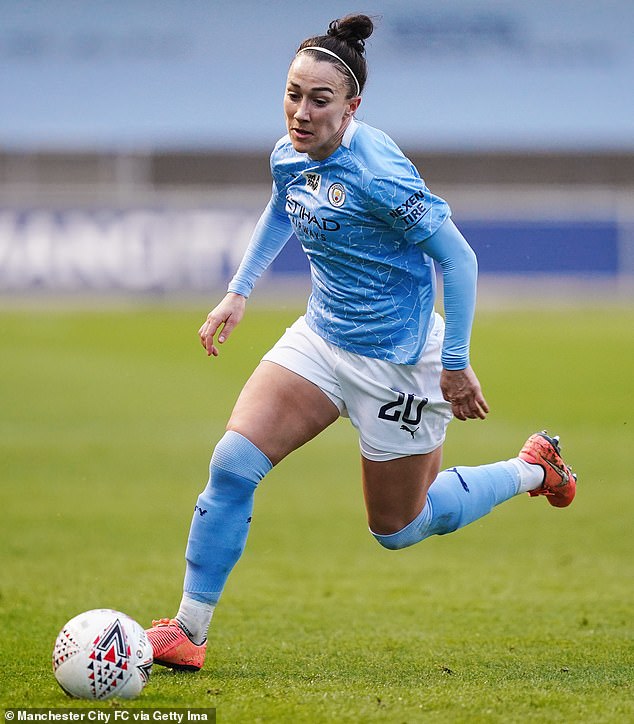 But it’s going to be tough. Barca have won all 20 of their league games, scoring 99 goals and conceding just three. Beat Barca and City will face holders Lyon, who have won the competition for the past five years, or last season’s beaten semi-finalists Paris Saint-Germain. Chelsea are on the other side of the draw, meaning an all-English final could be on the cards.

‘I’ve not played Barcelona before,’ Hemp says. ‘I’ve never been in the Champions League quarter-finals, so I’m excited. Hopefully it will be us and Chelsea in the final together.

City have a wealth of experience with Lucy Bronze and Alex Greenwood, who both won the Champions League with Lyon, as well as three American World Cup winners in their ranks.

‘When you’ve got those players around you that have done it before and know what it takes to win, it’s those players I look up to every day, see what they’re doing in the gym, see how they’re training.

‘I want to win trophies as much as everyone else. We’ve got the players that can do it, players that have done it in the past. ‘We’re going to do everything we can to win. We know we can beat anyone.’