Home » Soccer » Steve Bruce says he won't quit Newcastle, while Graeme Souness questions if they will win again this season 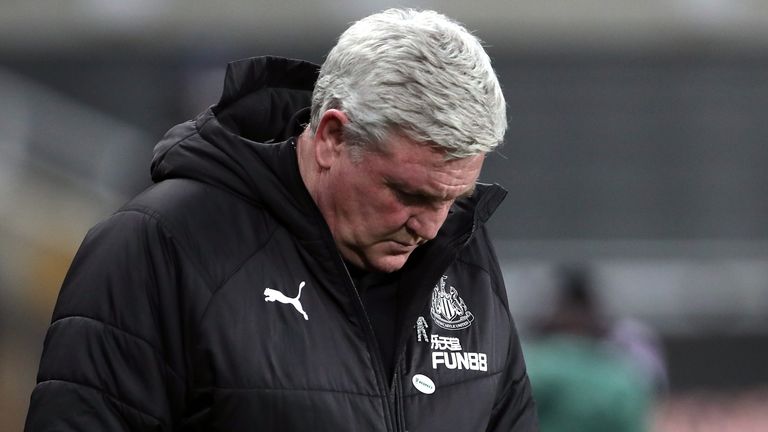 Steve Bruce insists he won’t quit Newcastle despite their lacklustre 3-0 defeat at relegation rivals Brighton, while Graeme Souness doubted the attitude of the players, questioning whether they will win another game this season.

Bruce’s side went into Saturday night’s game at the Amex Stadium having won just two of their last 17 league matches and were unable to improve their fortunes as the pressure increased on the Newcastle manager following a heavy defeat against their relegation rivals.

The result leaves Newcastle just two points ahead of 18th-placed Fulham, although the Cottagers have played one game more, while Brighton moved four points clear of Bruce’s struggling side.

After the game, Bruce admitted his players were beaten by the better side and he took full responsibility for the defeat, but despite calls for him to quit, he refused to walk away from the club.

“I accept that wasn’t good enough tonight,” he said. “It rests at my door. I accept that and will see what develops, but I won’t give up.”

When asked if he believed remaining at the helm at St James’ Park was the best way forward, Bruce said: “Well, I believe that, I’ve been around the block a long time. That experience, (I’ve been) trying to draw on it over the last few weeks in particular.

“So as I’ve said, I’m not the type to just walk away from a bad defeat, but you’re going to have to ask others.”

Newcastle supporter group 'Toon For Change' said after the defeat to Brighton:

“This evening’s result has presented
Mike Ashley and the club’s management with an opportunity to justifiably sack an
underachieving coach captaining a sinking ship that is heading straight for the
Championship.

“If history has taught Ashley one thing, it’s that acting too late in these
circumstances results in one thing, relegation.

“We implore the club to remove Bruce as coach immediately and appoint an
ambitious manager ahead of the international break, who has the capability of
keeping Newcastle United in the Premier League.

“There is still hope for the club this season, but we’re running out of time.
We need a decisive, brave decision – and we need it tonight”

How the Premier League table stands… 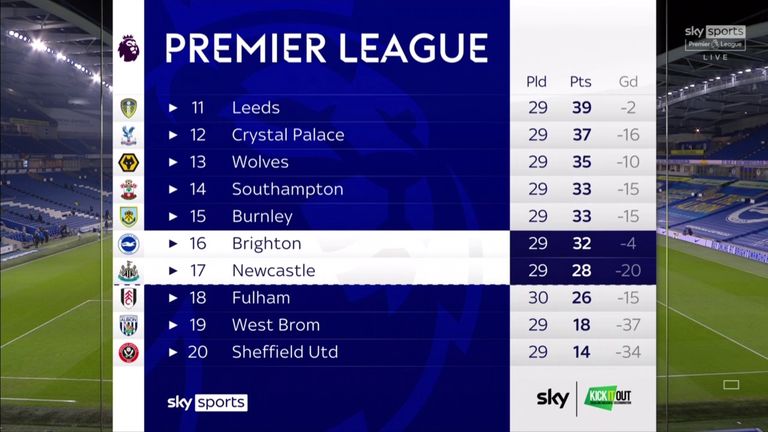 Speaking to Sky Sports, Bruce said: “Certainly it was tough. We were simply beaten by a far better team on the night.

“It was a very difficult evening for us, we have to accept it, and take responsibility for it, because at times it was a little bit too easy for Brighton. Take nothing away from our opponents, they were better in every department.

“Without the ball and with it, it was a big problem,” he added. “We kept surrendering possession back to them, and we all know they’re a very decent football team, and we didn’t do enough without the ball either. When that happens, it becomes a very difficult evening for you.

“We needed to get to half-time and didn’t quite get there. On the night, we were well beaten by the far better team on the night.

“We know we’re a little bit short in that [attacking department] and we knew we’d have to take Almiron off at some stage, probably after an hour, and unfortunately when you’re 3-0 down, it’s difficult to chase the game.

“My biggest thing, and we can analyse the whole thing, we weren’t good enough on the night, and I take full responsibility, like I should. We were nowhere near the levels we should be, and that was a big concern. It’s a big game and we didn’t do enough.”

Bruce confident he can turn things around 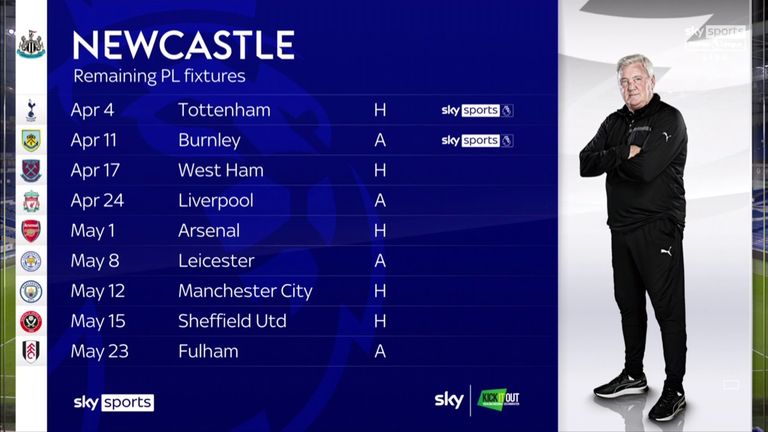 Newcastle are now without a win in their last six Premier League games and with matches against Tottenham, Liverpool, Arsenal, Leicester, Manchester City and relegation rivals Fulham to come, relegation is firmly staring at them in the face.

However, Bruce remains confident his experience can help him steer Newcastle away from the drop zone in the remaining nine matches of the campaign.

“We’ve got to accept we weren’t good enough,” he said. “We’ve got to dust ourselves down, and hopefully we can get a couple back in the next couple weeks, but even then, they’ve been out so long it’s of course a worry.

“Nine games to go, we’ve been doing well of late to a degree, but we have to accept tonight we were nowhere near good enough to get a result.

“We’re aware we’re without big players, but we can’t make that an excuse for tonight. We were nowhere near the levels required, and we didn’t get there at all. With the magnitude of the game, that’s what disappoints me.

“I’ve been in it a long, long time. It’s very, very difficult, and we know what is ahead of us, but I hope I can rely on my experience. We’re still confident we can get out of the situation we are in. I’ll never give up the fight, that’s for sure.”

Souness: Will Newcastle win another game?

Meanwhile, former Toon boss Souness was critical of the attitude of the Newcastle players, questioning whether they could win another game this season playing like that.

“Newcastle right now, every game is a big game for them, they don’t have any easy games left, the way they’re playing and the appetite they’re showing,” he told Sky Sports.

“It’s worrying for them, and Steve Bruce knows that. You can lose one way, and you can lose by not having a go, and I think tonight, Bruce alluded to it, they went down without a fight, for me.

“The buck stops with the manager, guaranteed. I hate talking about managers losing their job, but I think under this owner they have, someone who is looking to sell the club, it is paramount that they stay in the Premier League. He won’t be looking at individuals, he won’t have any sympathy for individuals right now, he’ll be looking at his asset, what it is worth in the Premier League, and how attractive that is to potential buyers, compared to being in the Championship.

“I look at that group of players, and I wouldn’t be confident about them winning another game, if that’s their attitude tonight. They were going through the motions.”

Souness: Where are the senior pros?

Souness added: “The focus always ends up on the manager, but who motivates the motivator? You need some players in that dressing room to fire up the players sat next to them. It can’t always come from the manager.

“I’ll never get fed up of saying this: You have no chance in football management unless you have good senior pros, and the influence they have over the lesser likes in the dressing room. I would question who those senior pros are in that dressing room, because I didn’t see any of them tonight.

“You can’t win football matches at this level unless you’re full of fire. Football matches are hard to win, but I saw a passive, non-aggressive, lacking in fire performance from Newcastle tonight. You’ve got to be on it to win matches.

“Not one of those players can go home tonight and say they’ve had a better night than the guy he was playing against. They all played second-fiddle, and that’s totally unacceptable.

“I’d be going round them all one-by-one saying: ‘We need more from you if you want to be in the Premier League next year.’

“The sad thing about it, if they were to go down, they’d all be looking for the exit door, and saying ‘I’m a Premier League player, I can’t stay on, I’m not a Championship player’. Really?

“There’s still time, but they’re reaching that last opportunity. The pressure is there, but not unbearable right now.”

What’s next for Newcastle?