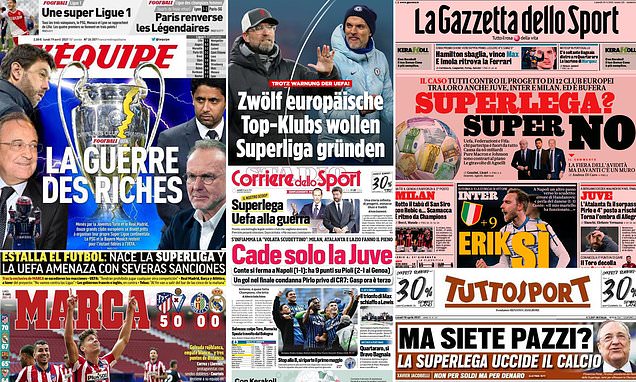 Super NO! Europe’s media united in fury at the ‘crazy’, ‘War of the Rich’ Super League proposals that ‘will kill football’ as shockwaves are felt across the continent

The Super League shockwaves are reverberating across the continent on Monday morning as Europe wakes up in horror at the work of 12 of the biggest, most storied teams in the game.

But this is a story that stretches for beyond those three countries as the Super League framework is a serious threat to upending the competitive spirit as we know it in every European nation. 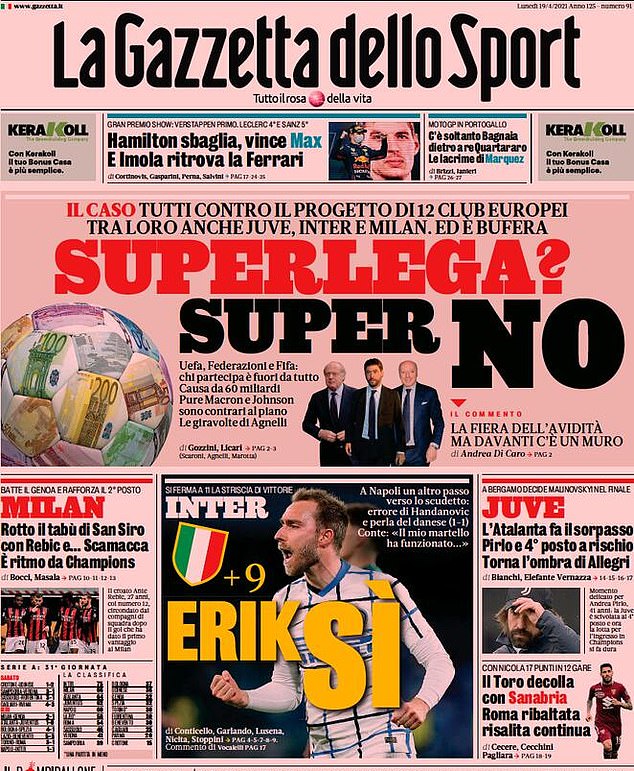 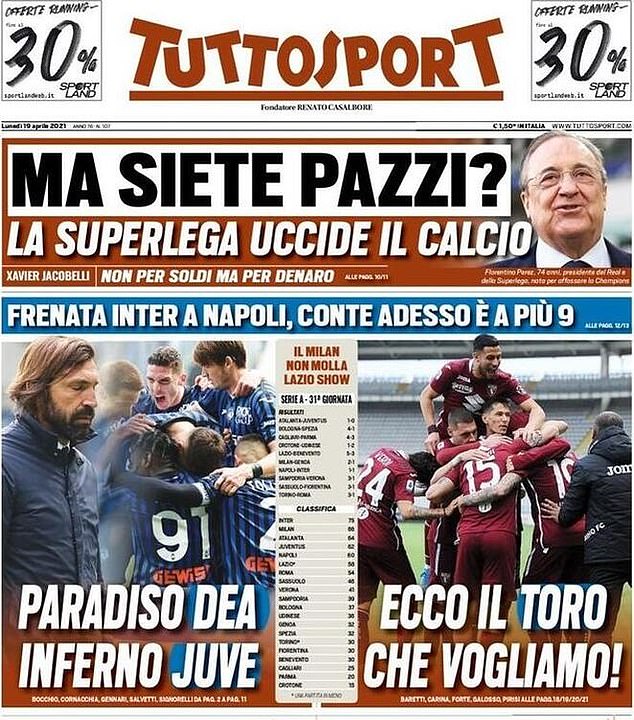 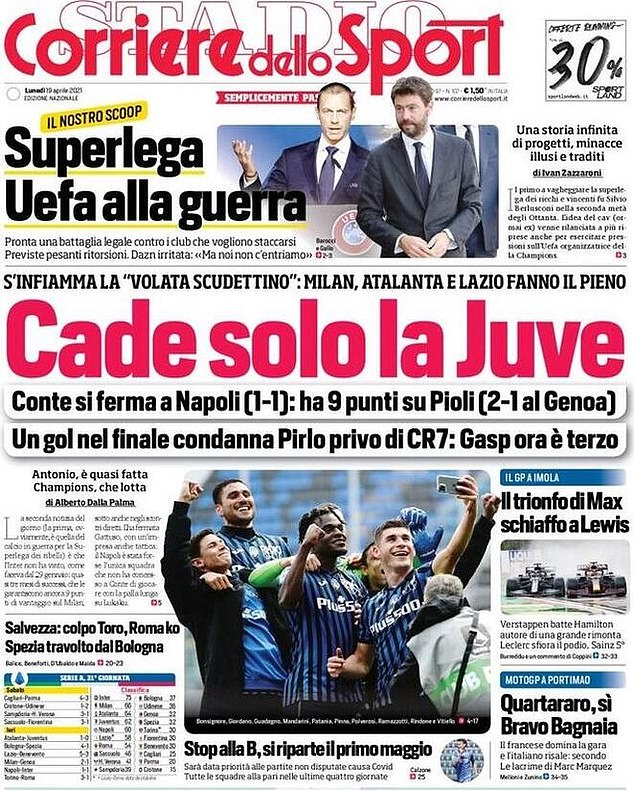 Corrierre dello Sport, meanwhile, said that UEFA and the Super League teams are at war

But one of the most striking headlines comes in Italy, where Gazzetta dello Sport writes: ‘The project of 12 European clubs including Juve, Inter and Milan. Super League? Super NO.’

Teams such as Paris Saint-Germain in France and Bayern Munich in Germany were notable omissions from the 12 founder clubs, but the story is still on the front pages there.

‘The War of the Rich’ said French publication L’Equipe, while Germany’s Bild focuses on its two Germans at the head of two of the founding Premier League in the Super League in Liverpool’s Jurgen Klopp and Germany’s Thomas Tuchel.

‘Twelve top European clubs want to found a super league,’ they write alongside pictures of the two managers.

Portugal were another nation whose bigger sides were outside of the big 12, yet the Super League proposals dominate the front pages there.

Warning of fines totalling tens of millions for its bigger clubs who may been considering joining the venture, Portugese publication A Bola says the Super League is ‘the mega process that promises to shake professional football in Portugal’. 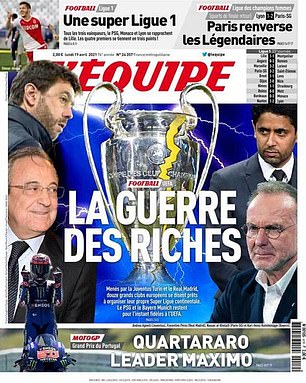 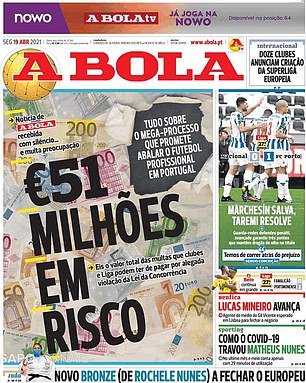 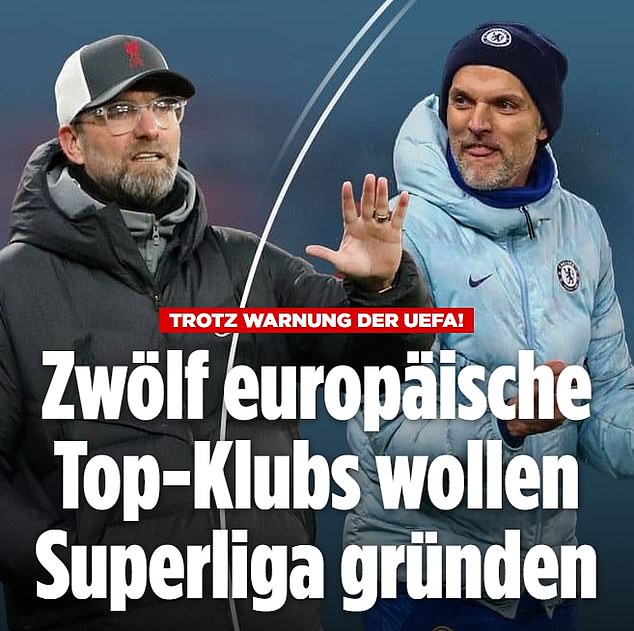 Curiously, there is less coverage given among the Spanish publications on Monday morning.

There are just small mentions on the front pages of all the daily sport papers there. Marca’s front page reads: ‘Football explodes: The Super League is born and Uefa threatens severe sanctions’ but the major focus is on Atletico Madrid’s 5-0 win over Eibar in the LaLiga title race.

Meanwhile, AS says similarly ‘The birth of the Super League: the war begins’ but like Marca, focuses on Atletico.

Mundo Deportive, the Catalan based paper, describe the plans as ‘the war of the Super League’ but the bulk of the cover is taken up by Barcelona celebrations after they beat Athletic Bilbao to win the Copa del Rey on Saturday night. 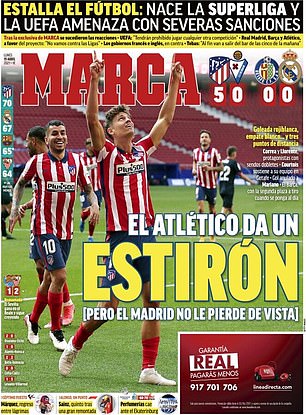 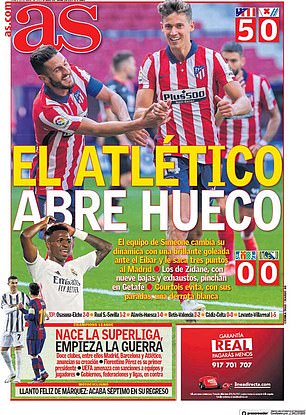 In Spain, there were smaller mentions of the plans on the pages of Marca and AS 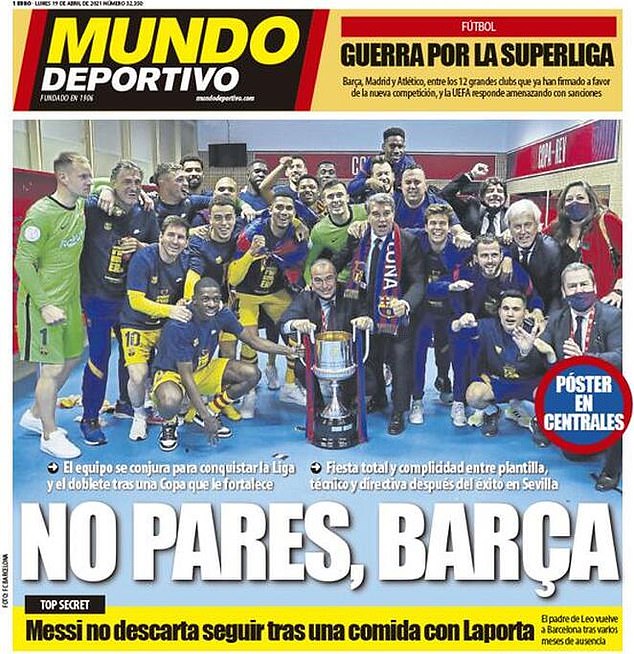 Catalan paper Mundo Deportivo focused on Barcelona’s Cope del Rey win, with just a small reference to what they also described as ‘the war of the Super League’

Twelve of Europe’s leading football clubs have today [Sunday] come together to announce they have agreed to establish a new mid-week competition, the Super League, governed by its Founding Clubs.

It is anticipated that a further three clubs will join ahead of the inaugural season, which is intended to commence as soon as practicable. Going forward, the Founding Clubs look forward to holding discussions with UEFA and FIFA to work together in partnership to deliver the best outcomes for the new League and for football as a whole.

The formation of the Super League comes at a time when the global pandemic has accelerated the instability in the existing European football economic model. Further, for a number of years, the Founding Clubs have had the objective of improving the quality and intensity of existing European competitions throughout each season, and of creating a format for top clubs and players to compete on a regular basis.

The pandemic has shown that a strategic vision and a sustainable commercial approach are required to enhance value and support for the benefit of the entire European football pyramid.

In recent months extensive dialogue has taken place with football stakeholders regarding the future format of European competitions. The Founding Clubs believe the solutions proposed following these talks do not solve fundamental issues, including the need to provide higher quality matches and additional financial resources for the overall football pyramid.

• 20 participating clubs with 15 Founding Clubs and a qualifying mechanism for a further five teams to qualify annually based on achievements in the prior season.

• Midweek fixtures with all participating clubs continuing to compete in their respective national leagues, preserving the traditional domestic match calendar which remains at the heart of the club game.

• An August start with clubs participating in two groups of ten, playing home and away fixtures, with the top three in each group automatically qualifying for the quarter finals.

Teams finishing fourth and fifth will then compete in a two-legged play-off for the remaining quarter-final positions. A two-leg knockout format will be used to reach the final at the end of May, which will be staged as a single fixture at a neutral venue.

As soon as practicable after the start of the men’s competition, a corresponding women’s league will also be launched, helping to advance and develop the women’s game.

The new annual tournament will provide significantly greater economic growth and support for European football via a long-term commitment to uncapped solidarity payments which will grow in line with league revenues. These solidarity payments will be substantially higher than those generated by the current European competition and are expected to be in excess of €10 billion (£8.7bn) during the course of the initial commitment period of the Clubs.

In addition, the competition will be built on a sustainable financial foundation with all Founding Clubs signing up to a spending framework. In exchange for their commitment, Founding Clubs will receive an amount of €3.5 billion (£3bn) solely to support their infrastructure investment plans and to offset the impact of the COVID pandemic. Florentino Pérez, President of Real Madrid and the first Chairman of the Super League said: ‘We will help football at every level and take it to its rightful place in the world. Football is the only global sport in the world with more than four billion fans and our responsibility as big clubs is to respond to their desires.’

Backing the new European league, Andrea Agnelli, Chairman of Juventus and Vice-Chairman of the Super League said: ‘Our 12 Founder clubs represent billions of fans across the globe and 99 European trophies. We have come together at this critical moment, enabling European competition to be transformed, putting the game we love on a sustainable footing for the long-term future, substantially increasing solidarity, and giving fans and amateur players a regular flow of headline fixtures that will feed their passion for the game while providing them with engaging role models.’

Joel Glazer, Co-Chairman of Manchester United and Vice-Chairman of the Super League said: ‘By bringing together the world’s greatest clubs and players to play each other throughout the season, the Super League will open a new chapter for European football, ensuring world class competition and facilities, and increased financial support for the wider football pyramid.’ 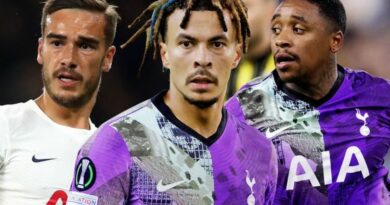