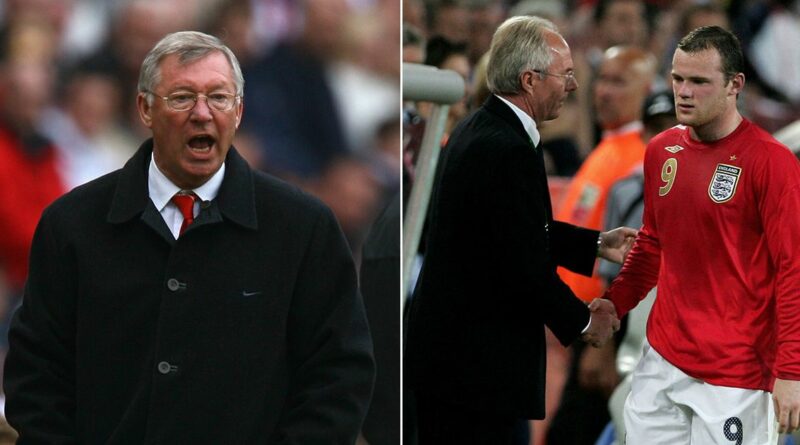 Sven Goran Eriksson told Manchester United icon Sir Alex Ferguson to 'f*** off' in a row over Wayne Rooney's selection in England's 2006 World Cup squad despite him being injured.

Rooney was famously picked by the Swedish boss despite fracturing a metatarsal bone in his right foot against Chelsea two months before the tournament, to the fury of his club manager.

David Dein, a former vice-chairman of the Football Association and known for his long association with Arsenal, played a part in Eriksson getting the England job – and only once recalls seeing him angry.

Dein explained how the only time he saw Eriksson annoyed was during a phone conversation with Ferguson, giving his side of the story in his new book Calling the Shots: How to Win in Football and Life.

He recalls: "Fergie was furious that Wayne Rooney was going to play at the World Cup, with England gambling on his recovery from a broken metatarsal.

Is Wayne Rooney England's greatest ever striker? Give us your thoughts in the comments section below.

The account comes months after Rooney and Eriksson spoke about the clash on the Amazon Prime documentary, Rooney. The striker said: "I remember thinking, it is my first World Cup, how can I not be there?

With Sven saying: "Sir Alex did not want Rooney to go. He told me very, very straight: 'You don't take him, that's it Sven, I am going to kill you!'

"I told him, Sir Alex, go on holiday, I am going to take Rooney and we are going to the World Cup. Sorry. And that was it [mimics hanging up the phone]!"

With Rooney adding: "My first training session with the team was the next day. We went out to the pitch, jogging round and there is a ball by the halfway line.

"I kicked it trying to hit the crossbar… pulled my groin. I had a six centimetre tear in my groin which I didn't report to the physios."

England went on to be knocked out on penalties by Portugal at the quarter-final stage, with Rooney scoring the one World Cup goal of his career eight years later against Uruguay.