Manchester United boss Erik ten Hag has been taken aback by how many fans backed him over the Cristiano Ronaldo saga, according to reports. The Portugal international left Old Trafford back in November after burning his bridges at the club. However, he’s still likely to be a topic of conversation when the Red Devils lock horns with Manchester City on Saturday afternoon.

Ronaldo had ended up staying at United last summer, despite being linked with the likes of Borussia Dortmund, Chelsea, Napoli and Atletico Madrid amid a desire to leave Old Trafford.

But he would eventually be shown the door in November, shortly after a bombshell interview with Piers Morgan where he didn’t hold back.

Ronaldo was left on the bench by United for the entirety of their 6-3 defeat to City earlier in the season, with Ten Hag saying he made the decision ‘out of respect for his career’.

And now, ahead of the reverse fixture at Old Trafford, the Independent claim Ten Hag has been ‘shocked’ by how many fans supported him during the ordeal.

Ronaldo criticised the Dutchman in his interview with Morgan, accusing him of a ‘lack of respect’.

Yet United fans have rallied behind Ten Hag, who has responded by helping them climb up to fourth in the Premier League table.

Should United overcome City, they’ll move to within just a point of their rivals in second.

And it would also mean them being just five behind table-toppers Arsenal, who have won 14 of their 17 matches so far.

Ronaldo had been hoping to join a Champions League team upon leaving United, believing he still had much to offer.

Yet he has since moved to Saudi Arabia with Al-Nassr, who believe the 37-year-old can have a huge impact on the development of football in the Middle East.

With Ronaldo no longer at the club, United are expected to start Anthony Martial up top of the contest against Pep Guardiola’s side.

The France international is primed to lead the line, with Marcus Rashford and Antony either side of him in attack.

At the back, Aaron Wan-Bissaka should start with Diogo Dalot a doubt – while Raphael Varane, Lisandro Martinez and Luke Shaw will be hoping to feature.

And it would take something serious to happen to David De Gea for Tom Heaton or Jack Butland to start in place of the Spain international.

Meanwhile, the biographer of Ten Hag has said the 52-year-old was ‘sincere’ in wanting to keep Ronaldo.

Maarten Meijer, who released his book before Christmas, told TribalFootball: “I think that he was sincere.

“I think he was not being disingenuous, I thought he was really prepared to work with him. He did not want to get rid of such a fantastic player.

“I think he wanted to work with him and then somehow when they started to build some steam, it just didn’t work out because yeah, we saw it happen as Ronaldo found it too demanding and he couldn’t fit in the system that they wanted to play and then this whole debacle (the interview) happened.”

And, when quizzed on how Ten Hag handled the situation, he stated: “He’s extremely protective of what’s really going on within his team and so forth, he’s not going to speak about detail so unless somebody really blows the whistle and says ‘oh my gosh we hear this or that’, but nobody really did so, there was just some rumblings going on that these guys didn’t see eye to eye with each other so I kind of picked up on that.”

United lost 2-0 to City in the same fixture last season.

An Eric Bailly own goal and strike from Bernardo Silva piled the pressure on Ole Gunnar Solskjaer, who would lose his job in the aftermath. 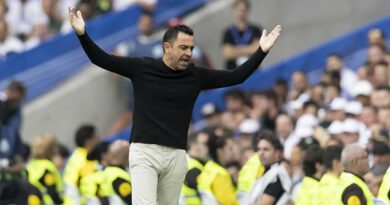 'We're not doing well AT ALL': Xavi criticises his Barcelona side