Home » Soccer » The night England WON a semi-final due to Nobby, and Bobby Charlton 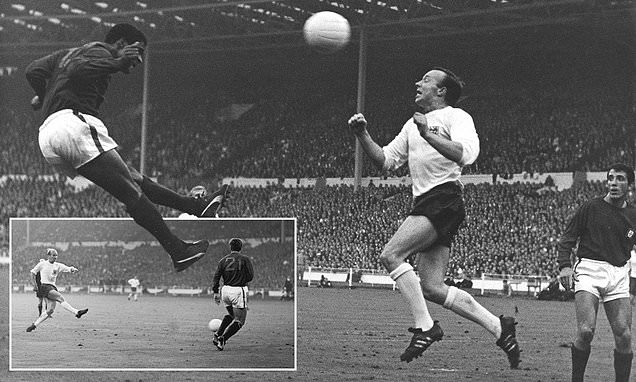 The night Eusebio was shackled and England WON a semi-final… thanks to Nobby and Bobby! How Stiles and Charlton inspired Alf Ramsey’s side to the World Cup final back in 1966

It was a night when Bobby Charlton slammed in two trademark goals from the edge of the penalty box and Nobby Stiles shackled Eusebio after a stroke of tactical wizardry by manager Alf Ramsey.

Tears flowed and a nation rejoiced, although the last semi-final England won was utterly eclipsed by the epic final that followed four days later.

Two heartbreaking semi-finals in the Nineties lost on penalties rankle instead and another in Moscow, three years ago, remains fresh in the mind. 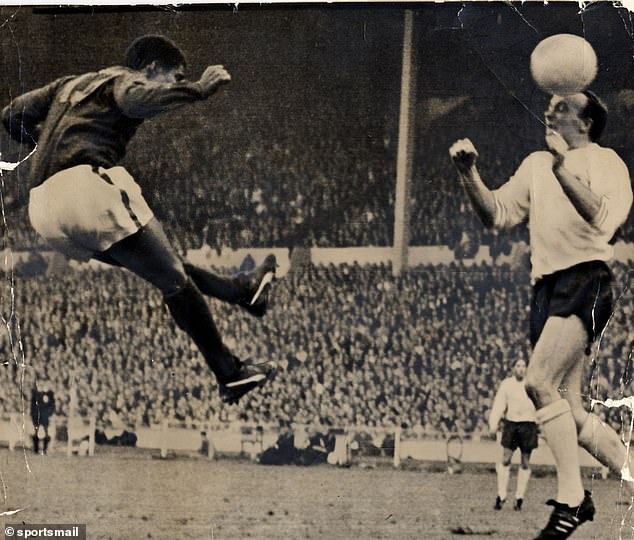 There was distant semi-final misery in the Euros at the hands of Yugoslavia, in Florence in 1968, most often recalled because Alan Mullery was the first England player to be sent off in a full international.

But, two years earlier, on a Wednesday night in July, inspired by Stiles, England beat Portugal 2-1 at Wembley and reached the World Cup final.

‘Dad was never one to say he was brilliant,’ recalled Nobby’s son Rob Stiles. ‘He wouldn’t brag but we’d get him talking and he thought he played well, marked Eusebio well that day. Others have always said to me it was his greatest ever game.

‘Portugal were a great team and Eusebio was probably the most feared player in the world at the time. Alf recognised the danger and changed the system a bit, moving Dad into the back four and Bobby Moore into a midfield position, which was a masterstroke.’

Stiles had been feeling the heat since a foul on France’s Jacques Simon during England’s last group game led to pressure on the FA from FIFA to drop him for the quarter-final against Argentina. 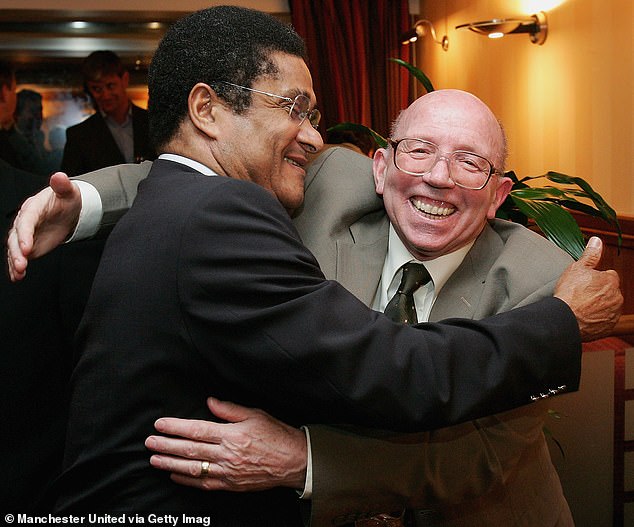 When summoned to see the FA’s senior international committee, Ramsey told them he would resign if they forced him to play without Stiles.

The aggressive midfield enforcer from Manchester United, who died last year at the age of 78, was key to the team’s balance and crucial to his plans for Eusebio.

‘Dad’s game was all about his professional dedication and commitment,’ said son Rob. ‘No matter how big a star Eusebio was, he was determined to nullify him to some extent.

‘He knew you couldn’t dive in or sell yourself, as he used to say, or he would beat you and get a shot away.

‘Four years before, Dad was told to man-mark John White in an FA Cup semi-final against Tottenham but he got away from him once and it led to a goal. He realised then that if you were marking the best players you had to stay with them. 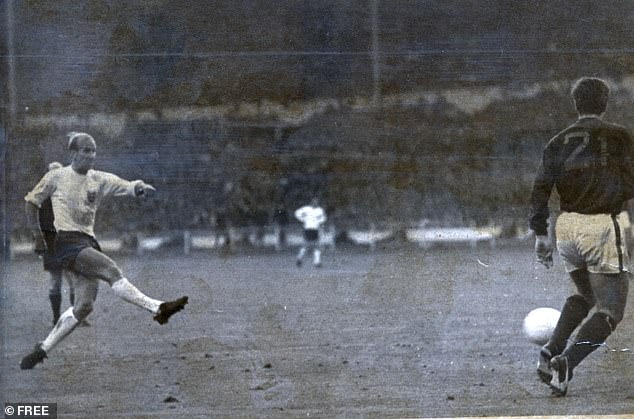 ‘Eusebio was bigger than Dad and lightning quick, so he wanted to be on top of him straight away, as soon as he got the ball, to stand up and hold him there for as long as possible.

‘It obviously worked. He said he felt Eusebio got sick of him in the end, started drifting to the wings and dropping deeper.’

Eusebio had been in prolific form, scoring four in a quarter-final as Portugal came back from 3-0 down to win 5-3 against North Korea at Goodison Park.

England’s semi-final was originally scheduled to be played at Everton’s ground, with West Germany against the USSR at Wembley, but FIFA switched the venues at the last minute.

They rightly assumed they could sell more tickets if the hosts played in the biggest stadium but the decision went down badly with Portugal, and with fans in a football-mad city in a year when Liverpool had won the title and Everton the FA Cup. 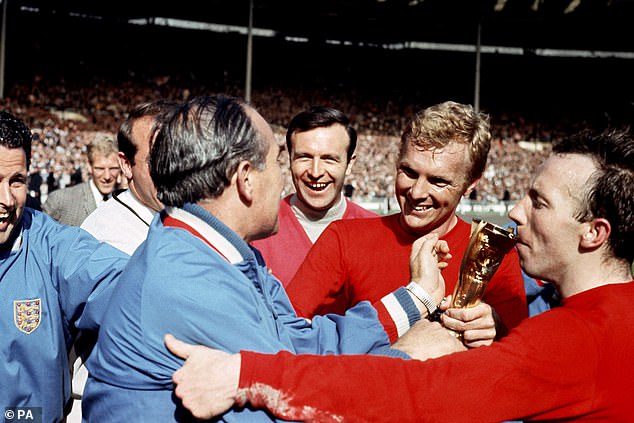 There were 58,479 at Goodison Park to see Portugal beat Brazil in the group stage but 20,000 fewer when West Germany beat the USSR in the rearranged semi-final.

Protest banners were on display in the crowd reading: ‘England Fix Insu£ts Pool’ and ‘Down with FIFA — England for the Cup’. Portugal’s complaints were rejected by Sir Stanley Rous, an Englishman, then FIFA president, and became the subject of greater debate when his successor, Joao Havelange of Brazil, later claimed the 1966 World Cup had been fixed in favour of the European teams.

Eusebio, who died in 2014 at the age of 71, said he adored playing at Goodison and always maintained Portugal would have beaten England in Liverpool.

They travelled to London on the eve of the game and were unable to train at Wembley, where the next day 94,493 packed in to see Charlton strike in the 31st minute.

Portugal goalkeeper Jose Pereira dashed out to save at the feet of Roger Hunt and the ball spilled to the edge of the penalty area. 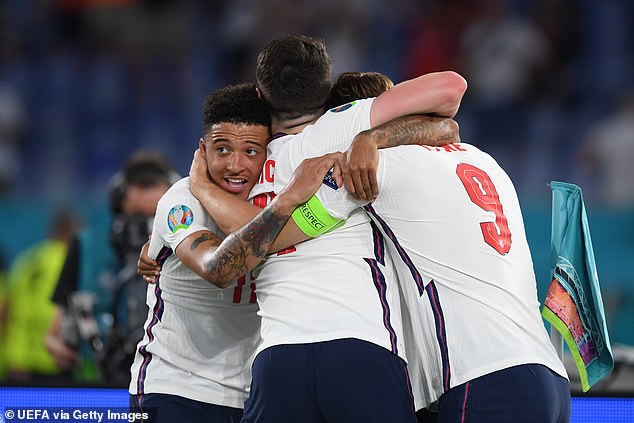 Charlton found the net with confidence. He was 28 at the time, at his peak and he made it 2-0 in the 79th minute, thumping in his second from similar range after a pass by Geoff Hurst.

It took Charlton’s tally to 40 goals in 73 international appearances and was the last time he scored more than once in a game for England.

Eusebio reduced the deficit with a penalty, eight minutes from time, after Jack Charlton had hooked a goal-bound header by centre forward Jose Torres away with his hand. It was the first goal conceded by England in the World Cup.

Perhaps another happy omen for Gareth Southgate, whose team have yet to concede as they set out to emulate Ramsey’s heroes in Wednesday’s Euro 2020 semi-final against Denmark at Wembley.

‘Dad would be delighted with how far they’ve gone,’ said Rob Stiles. ‘It looks like they have a similar spirit. The lads of ’66 were a great group and very close like this England.’ 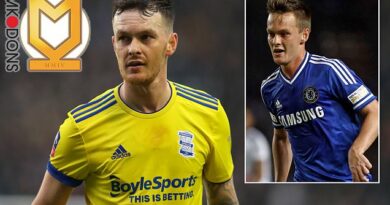 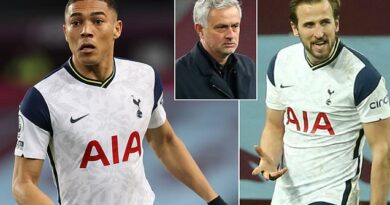 Why Carlos Vinicius is another example of Spurs' Harry Kane problem