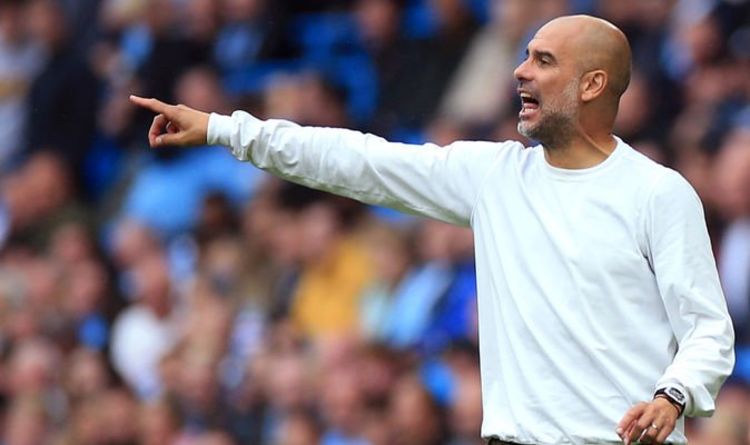 Manchester City have been sent back to the drawing board when it comes to their striker hunt, which started and finished with Harry Kane this summer. Pep Guardiola and his staff now have the luxury of time to regroup and consider their options, with a host of top talent set to be available in future windows.

Despite Guardiola publicly announcing his interest in Kane, Spurs were unwilling to budge on their valuation of at least £150million.

Although the England captain finished last season with the most goals and assists in the Premier League, it is still an awful lot to pay for a player in their late-twenties.

As it stands, City will plough on until at least January with no conventional senior striker within their squad, after Gabriel Jesus recently declared his preference to play out wide.

Ferran Torres seems to be doing an admirable job through the middle at present, but Express Sport takes a look at three huge targets who Guardiola should be keeping tabs on ahead of 2022.

JUST IN: Chelsea charged by FA over failure to control players during heated Liverpool draw

The big Norwegian has started this season in red-hot form, brushing off a summer of relentless transfer links to bang in six goals across his first five games.

A growing list of clubs are said to be plotting a move for the 21-year-old in 2022, when his £65m release clause becomes active.

Haaland’s father, Alf Inge, played for the Blues back in the early-2000s, and Erling himself was born just down the road in Leeds.

Others like Real Madrid, Bayern Munich and Juventus are sure to be sniffing around too, but if City play their cards right, they could emerge victorious from one of the most competitive transfer sagas imaginable.

Everything was in place for Kane’s switch to the Etihad this summer, apart from Daniel Levy’s green light to set the deal in motion.

Kane supposedly told the club early on that he wanted to join a club fighting for silverware before the prime years of his career pass him by.

Contracted until 2024, Spurs will still be under no major pressure to offload him next summer, unless a ‘gentleman’s agreement’ of sorts was reached over the past few weeks.

City’s reluctance to fork out £150million is now obvious, and with Kane another year towards his thirties in 2022, the price-tag may have to be significantly revised before a deal can be made.

Although signing Haaland or Kane look could be mission impossible, negotiating a deal for Mbappe could well be the hardest of the three.

The Frenchman’s desire to join Real Madrid is the worst kept secret in Europe, despite Los Blancos’ failed attempt to test PSG’s resolve before the transfer deadline.

If Mbappe refuses to sign a new contract in Paris, which looks highly likely, the frontman will be at liberty to negotiate a pre-contract agreement in January which would precede a free transfer in the summer.