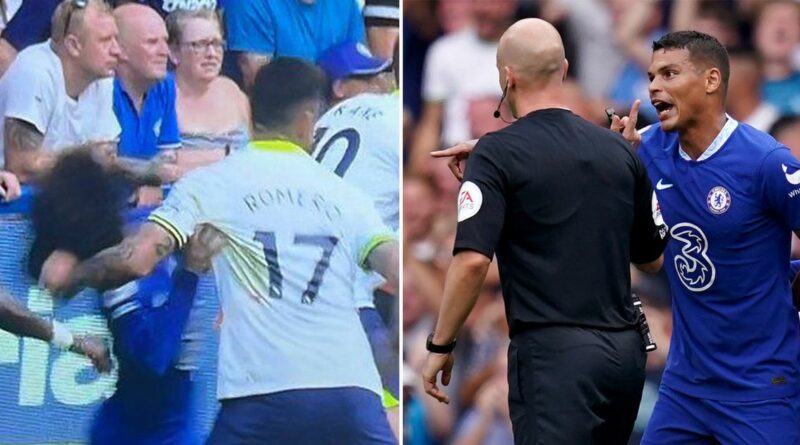 Thiago Silva has hit out at Anthony Taylor on Instagram for missing a hair pull on Chelsea defender Marc Cucurella in the build-up to Tottenham's equaliser on Sunday.

Chelsea looked to be heading for all three points after twice going in front through Kalidou Koulibaly and Reece James. Only for the visitors to draw level in controversial circumstances both times, first through Pierre-Emile Hojbjerg and then Harry Kane.

Kai Havertz appeared to be fouled in the build-up to Tottenham's first equaliser, while Richarlison was stood in an offside position in front of Edouard Mendy as Hojbjerg's shot came through. But it was Spurs' second goal that really stuck in Silva's craw.

Although there was nothing wrong with Kane's header itself, Tottenham defender Cristiano Romero clearly pulled Chelsea new boy Cucurella's hair in the penalty box in the build-up. Referee Taylor and VAR officials both chose to ignore what appeared to be a clear red card incident, allowing the game to continue and Spurs to make it 2-2.

A furious Silva posted on Instagram to highlight the incident, uploading a picture of the moment Romero pulled Cucurella's hair with the caption, translated from his native Portuguese, reading: "Haven't you seen this??? No way. Can you pull hair out?" Chelsea goalscorer Reece James also laid into the match officials while speaking to Match of the Day 2. "I think we should have won the game," James said. "There were two arguable goals for them. I think the referees and the fourth official need to look back on them. It's frustrating for us when you deserve to win the game.

"I don't know what they [the officials] were looking at, but we have to take the positives from the game. We were all over them throughout the game."

What did you make of Anthony Taylor's refereeing performance on Sunday? Let us know in the comments section below. Blues boss Thomas Tuchel sensationally claimed after the match that Taylor should not referee his side again following a day of drama at Stamford Bridge. The German is now being investigated by the FA for his comments.

Dave King: Rangers chairman to step down in New Year