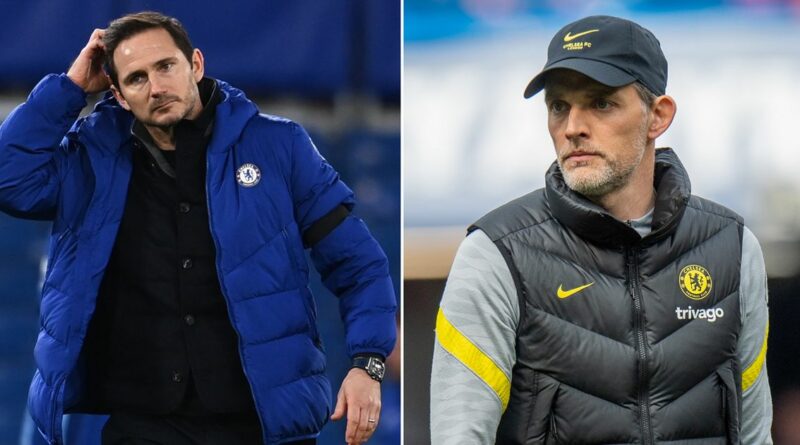 Thomas Tuchel still feels a little guilty being the one who replaced Frank Lampard in the Chelsea hot-seat.

Not that he has any reason to, having played no part in the Blues’ decision to sack their club legend back in January 2021. Yet, as he prepares to take his FA Cup finalists to face Lampard’s relegation-threatened Everton, Tuchel admits he wishes it had worked out better for his predecessor.

The German loves it when a former playing great assumes the managerial reigns at the club where he made his name on the pitch. Just as Chelsea’s all-time record goalscorer Lampard did for 18 months before ruthlessly shown the door by Roman Abramovich.

And on the eve of their first managerial showdown, Tuchel revealed how the ex-England ace made a potentially a tricky situation at the time of his appointment that much easier with a dignified ‘good luck’ text.

Asked if it will be surreal facing such a decorated Chelsea icon, the Stamford Bridge supremo said: “A little, yes. I still don’t feel 100 per cent comfortable because I took over from him in the middle of the year.

“We had a quick chat then because he was a real gentleman and sent me a long message after I took over.

“I replied to him, I knew that the decision was done and that I did not have anything to do with pushing him out because I was happy to see a legend like this on the sideline of his club.

“I think this is a very nice story and a story football needs – like Pep Guardiola at Barcelona and now Xavi at Barcelona. I like these kind of stories.

“So to play against him now at Everton is very nice because I was also a huge fan of him as a player – and he was a true gentleman when I took over.”

Unfortunately for Lampard and his troubled Toffees, who are sitting in the drop zone, there will be no sentiment shown by his old club once the action kicks off.

Tuchel, making his first visit to Goodson Park, confirmed: “Absolutely, I will be happy to meet him in person – although we will not exchange any gifts, I think, on Sunday. This is agreed!

“I am also excited as people tell me how great the atmosphere can be at Goodison Park and this is one of the true, old-school English grounds.”

Meanwhile, Tuchel reckons Cezar Azpilicueta captaining the side for the 200th time proves that good people can make it to the very top of the game.

The former Paris Saint Germain coach declared: “I’m so happy that a humble, friendly person, who is not the most talented footballer in the world, can lead a club like this to all the titles you can possibly win.

“He is that guy – humble, friendly, a family person. And so hard working, with a mentality of a real fighter and also a water carrier, always ready to help out. There are no words for it – it’s simply exceptional.“

Rangers to submit resolution to SPFL amid bullying claims