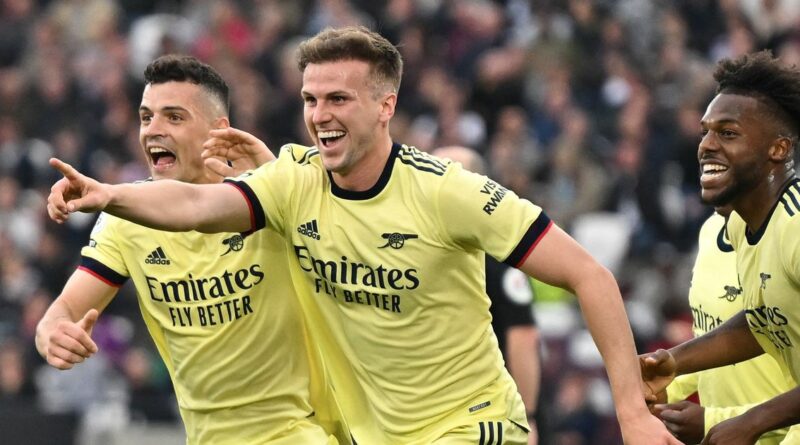 Arsenal have continued their charge towards a top-four finish in the Premier League after a 2-1 win over London rivals West Ham.

The Gunners have now won three games in a row as they climb above Tottenham Hotspur in fourth place. The visitors' opener may have come as a surprise to many however, as Rob Holding who stepped up in the absence of Ben White after a tight hamstring, headed it past Lukasz Fabianski.

But the Hammers were quick to respond through Jarrod Bowen who struck the equaliser on the brink of half-time. Arteta's men did not mess about, and looked to get back on the front foot after the break, doing in the 54th minute. Gabriel got his name on the scoresheet following a cross from Brazilian compatriot Gabriel Martinelli. The win has seen Mikel Arteta's men climb to fourth place in the Premier League on 63 points with four games left to the end of the campaign.

Following the win at the London Stadium, the Daily Star Sport takes a look at what Arteta got right and what he would have hoped his side got done sooner, after West Ham win…

Sometimes good things come out of the bad. It was no different with Rob Holding after he was named in the Arteta's starting team, in the absence of Ben White who missed out with a tight hamstring.

The 26-year-old scored his first ever Premier League goal for Arsenal in what was only his sixth start of the campaign. He also played a significant role in defence, contributing to key blocks to keep the Hammers' damages minimal.

HAVE YOUR SAY: Will Arsenal finish in the Premier League top four this season? Comment below.

Arsenal scored their 13th goal from set piece this afternoon, and their third in two games. Both of Arsenal's goal scorers were centre-halves in Holding and Gabriel, despite an unusual sight for many, they made their contribution, which topped up by their display in defence also.

Only Pep Guardiola's Manchester City have scored most goals from set pieces on 18, two more than Liverpool. Southampton hold the third most with 15.

The Japan international who had been sidelined since January with a calf injury, did not disappoint upon his return. He had only made two appearances in 2022, prior to his injury, but it was like he was never away, with a positive performance.

He kept Said Benrahma at bay, was well composed in defence, and also contributed to clearing any threats posed by the home side. Not only that, he often tried to start play up the pitch.

Despite a positive display, his afternoon ended early after feeling some discomfort on his leg – the Gunners faithful will be hopeful he can take part in the remaining games of the season.

But one he got wrong…

Not seeing the game out initally

After doubling their lead shortly after the break, Arteta and Co will be gutted they didn't see the game out straight away. Although they were lucky to not concede an equaliser during the Hammers' high pressing in their box.

Defence stayed on top of their game however, dealing efficiently with dangerous attacks from David Moyes' side and were rewarded with all three points.