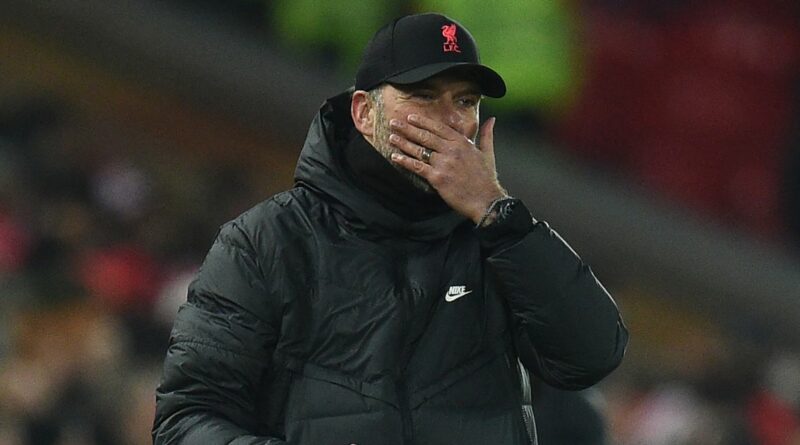 Jurgen Klopp’s decision to rotate his side for Liverpool’s Carabao Cup quarter-final against Leicester City very nearly proved costly on a night of high drama at Anfield.

Jamie Vardy scored twice in the opening 13 minutes to leave a Liverpool side which contained 10 changes from Sunday's 2-2 draw against Tottenham reeling.

Alex Oxlade-Chamberlain hit back with a neat finish, but James Maddison’s stunning strike sent the Foxes in 3-1 up at half-time, despite Vardy missing a good chance for his hat-trick.

Diogo Jota came off the bench at half-time as part of a triple-substitution from Klopp and the Portuguese striker continued his fine form with a well-taken strike to make it 3-2.

Jota tested Kasper Schmeichel with an instinctive header from Naby Keita's shot before Takumi Minamino fired in a dramatic equaliser in the 95th minute from James Milner's pinpoint pass.

Minamino missed the chance to send Liverpool through from the spot, but two fine saves from Caoimhin Kelleher gave Jota the winning moment, which he gratefully took after the shoot-out reached sudden death.

This was Liverpool’s seventh of nine games in December, and with Leeds coming up on Boxing Day, Klopp gave opportunities to several youngsters.

It just about paid off. Here are the three things Klopp got wrong and two he got right on an action-packed night at Anfield.

What Klopp got wrong…

Klopp’s views on the tough December schedule are extremely well-documented. And with the additional strain of coronavirus, this year is a perfect storm.

He used his programme notes ahead of this game to re-emphasise his point.

“Look at the physical strain on the athletes already,” he wrote.

“Let’s work collaboratively to find a solution. It is not OK to ask teams to play twice in two days at the moment. It is absolutely not OK, actually. It would be entirely wrong.”

It was therefore hardly surprising to see him ring the changes, with two more games left to play before the New Year.

But an argument can be made that he went one step too far, that he made a few too many changes. This was a valuable experience for youngsters, but it took the subs to make the difference.

HAVE YOUR SAY! What did you make of Jurgen Klopp's decision and the team's performance? Comment below.

Joe Gomez has endured a difficult 2021. After spending most of the year on the treatment table, the defender returned in the off-season alongside Virgil van Dijk.

But while Van Dijk made a triumphant comeback from injury at the start of the campaign, things have been much less smooth for Gomez, who has been forced to be very patient, with Joel Matip and Ibrahima Konate pushing him down the centre-back pecking order.

He is yet to start a single game in the Premier League this season, so would have been hoping to impress against Leicester.

That was not to be. Playing alongside the inexperienced Billy Koumetio and against Vardy was never going to be easy, but his performance was still slightly alarming.

Vardy preys on space in behind and he had it in abundance for his quickfire early double. He could have had a first-half hat-trick, too, after Gomez’s sloppy touch allowed him to strike the post.

Tyler Morton was the only Liverpool player to retain his place in the starting XI from the 2-2 draw at Tottenham.

But once again the match didn’t go to plan for the 19-year-old midfielder, who was substituted against Spurs after picking up a booking.

It was a repeat performance against Leicester, who took advantage of his inexperience and early yellow card for a poor tackle on Ricardo Pereira.

Maddison ran riot in the first half, feeding Vardy with through-balls before hammering home an unstoppable long-range effort. Morton did not return to the pitch after the break, as Milner was summoned from the bench.

Klopp may not have had much choice, but the last few days have been a baptism of fire for Morton.

What Klopp got right…

Among the many changes there was one worthwhile experiment from Klopp.

Neco Williams has usually been seen as Trent Alexander-Arnold’s understudy at right-back for Liverpool, but he was deployed further forward as a right-winger against Leicester.

Williams has played that position for Wales, but it was interesting to see the 20-year-old given more attacking freedom.

Although he didn’t influence things much, it was valuable time spent, given the need for alternatives when Sadio Mane and Mohamed Salah jet off to the African Cup of Nations.

Klopp made a triple change at half-time, bringing on the cavalry in the form of Milner, Jota and Ibrahima Konate.

His starting line-up did not work, but his changes definitely did.

Jota was a livewire right from the whistle, scoring a fine goal and leading the line with class, while it was Milner’s pass which picked out Minamino for the dramatic late equaliser.

The win came in fortuitous fashion, in the lottery of a shoot-out, but Klopp deserves credit for his quick thinking.