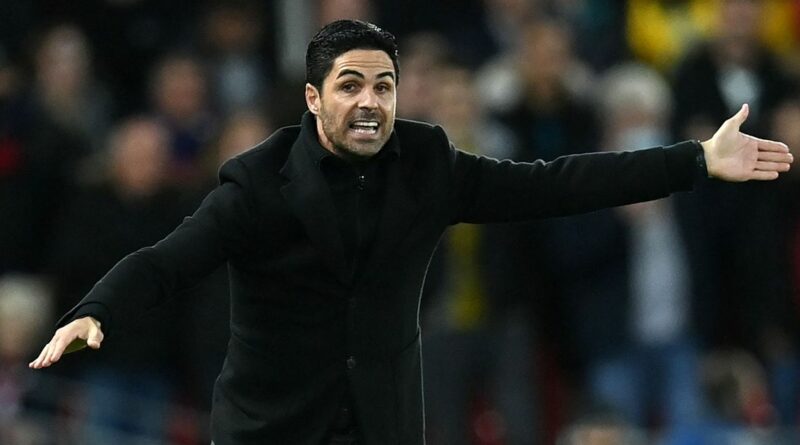 Arsenal’s 4-0 battering at the hands of Liverpool unsurprisingly sent sections of the club fan base into an angry online frenzy after the match.

The defeat marked six straight defeats at Anfield with a calamitous record of 22 goals conceded in those fixtures, leaving many to question whether the side have actually improved under Mikel Arteta since he took over in December 2019.

Indeed, Arsenal have been outclassed by all three of Liverpool, Manchester City and Chelsea this season, conceding 11 goals and scoring zero in those games.

Yet, while alarming, the Liverpool display didn’t necessarily showcase new weaknesses, but reinforced persistent problems which had been overshadowed by impressive recent results.

It doesn’t seem all that long ago that Aubameyang was Mr Dependable for the Gunners.

The Gabonese striker scored a remarkable 70 goals in his first two and a half seasons in north London, some of which were in massive games against the likes of Manchester City on the way to winning the FA Cup.

Do you think Arsenal can become title contenders by signing a world-class midfielder and striker next summer? Let us know in the comments section.

But the forward has been more of a hindrance since the start of last season – his pace and first-touch have diminished while his finishing, once his greatest asset, has left fans in awe for the wrong reasons on several occasions this season.

And with Aubameyang’s finishing and link-up play far from the standards required to lead a top-four contending side, Arteta has had to play Alexandre Lacazette alongside him for the duo to collectively perform the job of one world class striker.

With Lacazette’s contract up this summer and Aubameyang past his best, Arteta will need to prioritise bringing in an attacker with world class potential next summer.

There is no question that signing Takehiro Tomiyasu for just £16million in the summer was a masterstroke by technical director Edu.

The Japanese international’s defensive qualities, with the exception of the odd delay in pressing the opposition, are mainly faultless.

But while he is a huge upgrade on Real Betis loanee Hector Bellerin, Tomiyasu still has a lot to work on in the attacking side of the game.

The 23-year-old as a central-defender-type right-back can be forgiven for not being a naturally attack-minded player, but his hesitance to support the attack leaves Arsenal short on the right flank.

Bukayo Saka this season has often been crowded out by two opposition defenders when receiving the ball without Tomiyasu making a surging run to provide an option or distraction.

Albert Sambi Lokonga was largely an unknown quantity to many Premier League fans when he was signed for £18million in the summer.

While he has shown promise with his passing range, the 22-year-old’s rawness in possession and the defensive side of the game means Arsenal cannot compete with the biggest sides with him as Thomas Partey’s primary central-midfield partner.

The Gunners have also given Ainsley Maitland-Niles the opportunity to play in midfield this campaign, but like Lokonga, the youngster is several steps away from the quality Arsenal’s top-six rivals possess at this moment in time.

Granit Xhaka is crucially set to return to training in January, though the veteran’s lack of mobility is a tried and tested weakness which will continue to limit the Gunners even once he recovers.

That leaves Arteta in need of a truly elite central midfielder in order to take Arsenal to the next level, with the likes of Renato Sanches now reportedly being considered.

Edu should aim to find a midfielder who can retain the ball like Xhaka but who also possesses the physicality and mentality to actually be an upgrade on the Swiss international.

Josh Magennis: There will be tears if Northern Ireland reach Euros