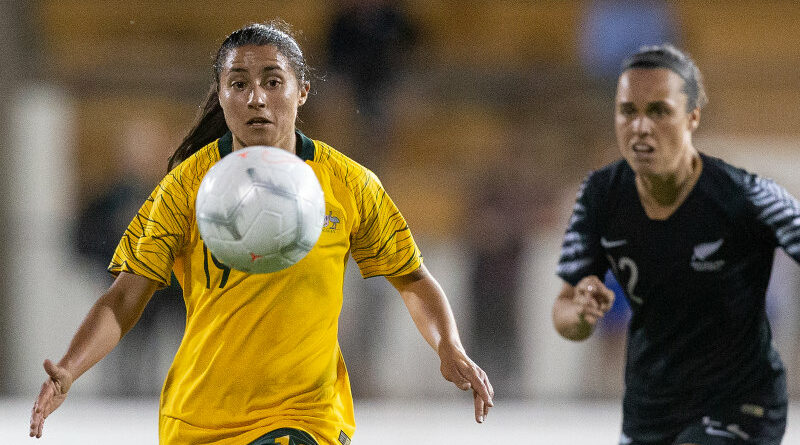 Annastacia Palaszczuk, Brisbane Lord Mayor Adrian Schrinner, and Australian Olympic Committee boss John Coates are all done talking. The final presentation from the Brisbane 2032 bid team is now complete – IOC members now have the opportunity to ask questions and then very shortly, they’ll be voting on whether or not Brisbane should get the Olympics.

The Games will reignite the world after the COVID-19 pandemic, Prime Minister Scott Morrison says, as Queenslanders await the announcement of whether Brisbane will secure the 2032 Olympics.

Hundreds have showed up at South Bank in Brisbane to watch the announcement live.

Olympians remain “99 per cent” confident Brisbane will win, as Mr Morrison addressed the crowd via video.

“Our hope is that the benefits of the Games extend well beyond Australia,” he said.

He recalled Cathy Freeman’s sensational win that “advanced a generation in a single night”.

“That’s what Olympics can do,” he said.

“I have no doubt that sport helps sustain the resilience our citizens so clearly demonstrated during the COVID pandemic,” she said.

Olympic boxer Brad Hore said he was confident Brisbane would secure the Games.

He said the Games would give something for children to look up to.

“I think it’ll bring the community together…the best thing about Queensland is they really love their sport,” he said.

“It will be buzzing for that whole month.”

A Chilean Taekwondo competitor and a Dutch skateboarder have both been removed from competition in Tokyo after testing positive to COVID-19.

They are the first athletes forced to withdraw form competition after recording positive tests. Other athletes who have tested positive have been isolated but not yet forced out of the games.

According to games website Inside the Games, the Dutch skateboarder Candy Jacobs was in the village when she returned a positive test and will now not compete.

“I’m devastated,” the 31-year-old Dutch skateboarder said. “We were ready for the Games, I feel fit and now it’s over. I need time to process this but I wish my team all the strength and success in Tokyo.”

Fernanda Aguirre twice tested positive at the airport as she was preparing to fly to Tokyo and will now have a ten day quarantine.

Jacobs was the fourth athlete to test positive while inside the Olympic Village.South African footballers Thabiso Monyane and Kamohelo Mahlatsi and Czech beach volleyball player Ondřej Perušič have all also tested positive.

It also emerged this morning that a Czech coach tested positive.

It’s been a busy day in Tokyo

All the 2032 developments aside, and it’s been a pretty busy day in Tokyo as it is. The opening ceremony for these Olympics isn’t until Friday, but competition has begun in softball and football.

It was a tough day for Australia, as they were beaten 8-1 by Japan in the softball where the mercy rule was invoked. Eryk Bagshaw, one of our five reporters in Tokyo, explains here how the host nation really needed a win – what with all the COVID problems and everything.

There are also six matches tonight in the women’s football. We’ll be guiding you through Australia vs New Zealand from Tokyo Stadium, but for round-ball aficionados there are some very tasty fixtures, featuring some of the world’s biggest stars: Great Britain vs Chile, China vs Brazil, Sweden vs United States, Japan vs Canada, and Zambia vs the Netherlands.

The state of play for Brisbane’s 2032 bid

Despite what the International Olympic Committee is publicly insisting, this is absolutely a foregone conclusion for Brisbane. The bid was elevated to preferred bidder status back in February, the Brisbane 2032 team subsequently entered exclusive negotiations with the IOC, and there are no rivals on the table right now for IOC delegates to consider.

Queensland Premier Annastacia Palaszczuk, Sports Minister Richard Colbeck and Brisbane Lord Mayor Adrian Schrinner are all in Tokyo and are getting through their final presentation. Voters are due to cast their ballots between 6.10pm and 6.30pm AEST, with an announcement expected to be delivered at 6.30pm.

This will be Australia’s third home Olympics, after Melbourne 1956 and Sydney 2000. There’s live sites all over south-east Queensland – which isn’t in lockdown like the rest of the eastern seaboard – where people are congregating as they await the good news.

Hi everyone and thanks for being a part of The Sydney Morning Herald and The Age’s live coverage of this evening’s historic announcement, with Brisbane expected to imminently be awarded the hosting rights for the Olympic Games in 2032.

I’m Vince Rugari and I’ll be guiding you through the announcement and all the reaction, before my colleague Dominic Bossi takes the reins a little bit later on, when the Matildas face New Zealand in Australia’s must-win football opener in Tokyo at 9.30pm AEST – a game that will shape their bid for Olympic glory.

With half the country currently in lockdown, this could be a night for some much-needed warm and fuzzy feelings. Fingers crossed.

The top 10 young players in the Premier League