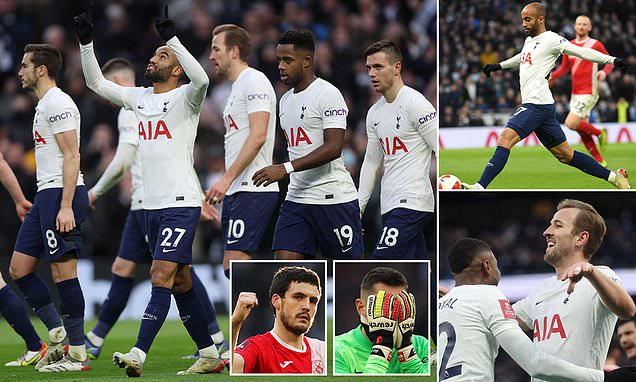 Tottenham 3-1 Morecambe: Harry Kane, Lucas Moura and Harry Winks rescue Spurs with late goals after struggling League One side had led much of the FA Cup tie through Anthony O’Conner strike

Tottenham needed three goals in the final 16 minutes to avoid an FA Cup upset against Morecambe as they came from behind to win 3-1 on an afternoon when record signing Tanguy Ndombele was booed off by the home crowd.

Anthony O’Connor’s first-half goal had the League One side – 59 places below their hosts on the football ladder – dreaming of the most famous result in their history, but a late blitz spared Spurs’ blushes.

After Ndombele, who asked to leave the club last summer, angered the home fans by taking an age to leave the field when being substituted – surely a terminal act in the Frenchman’s underwhelming stay in north London – quickfire goals from Harry Winks, Lucas Moura and Harry Kane sent Antonio Conte’s side through to round four. 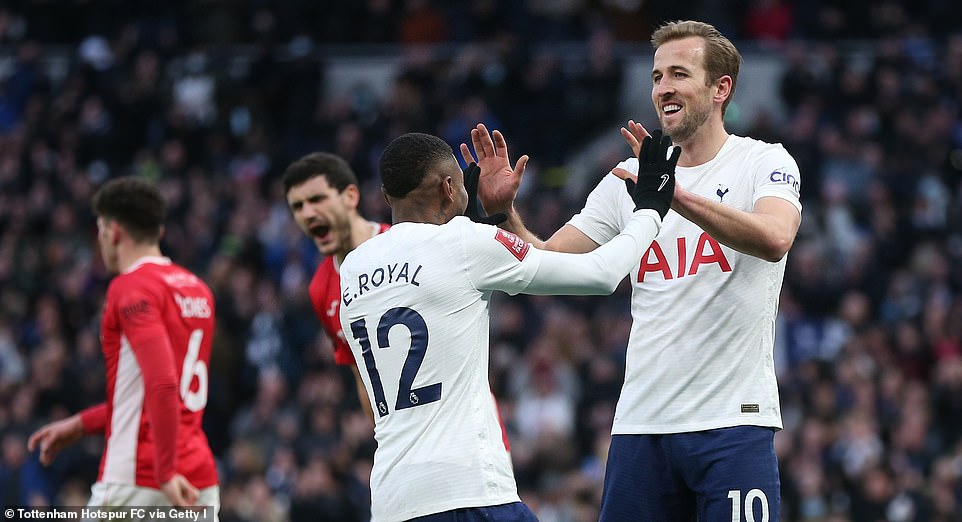 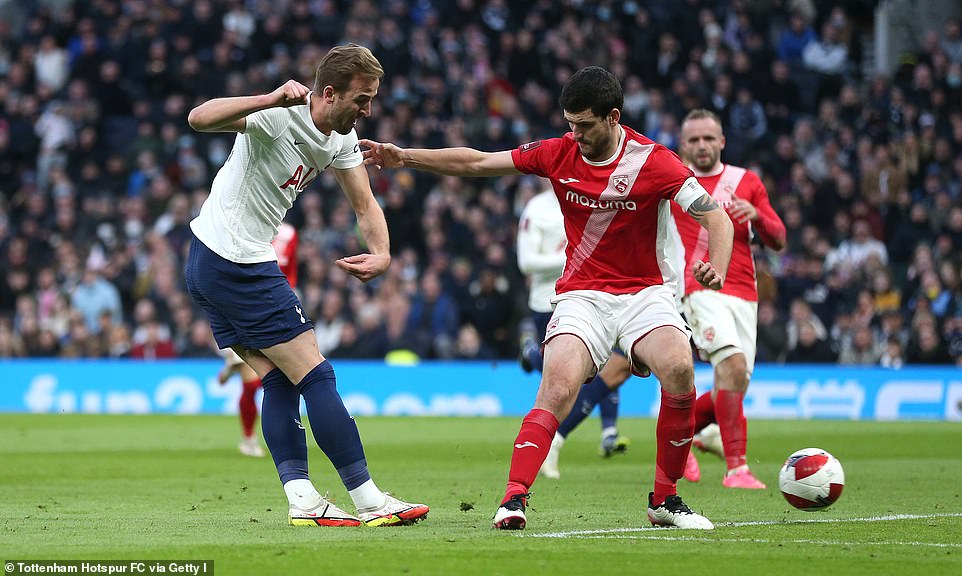 Spurs were forced to call on their main striker from off the bench, with the England captain scoring with two minutes left 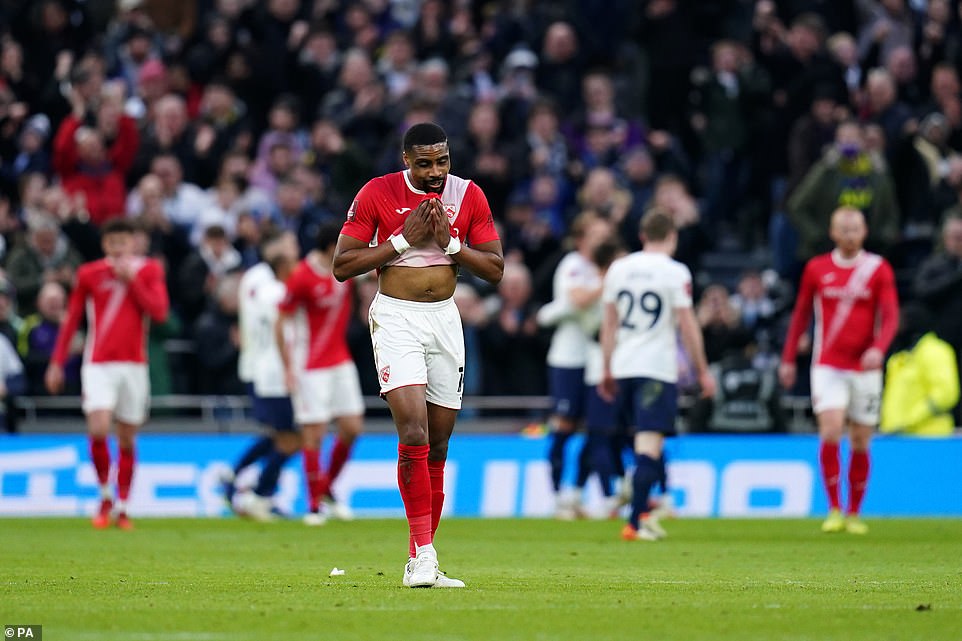 But Conte will have had his assertions that the majority of his squad are not good enough to compete for the major honours confirmed in a sub-standard display and Ndombele might not be the only one considered to be at the end of the road.

Morecambe, whose manager Stephen Robinson was absent due to a positive coronavirus test, put up a spirited display and can take heart in how their Premier League hosts struggled to get past them.

Conte made eight changes from the side that lost to Chelsea in the Carabao Cup semi-final first leg in the expectation that it would not be an issue against a side in a League One relegation battle.

And they may have enjoyed a far more comfortable afternoon had Spurs taken two chances within the first minute. 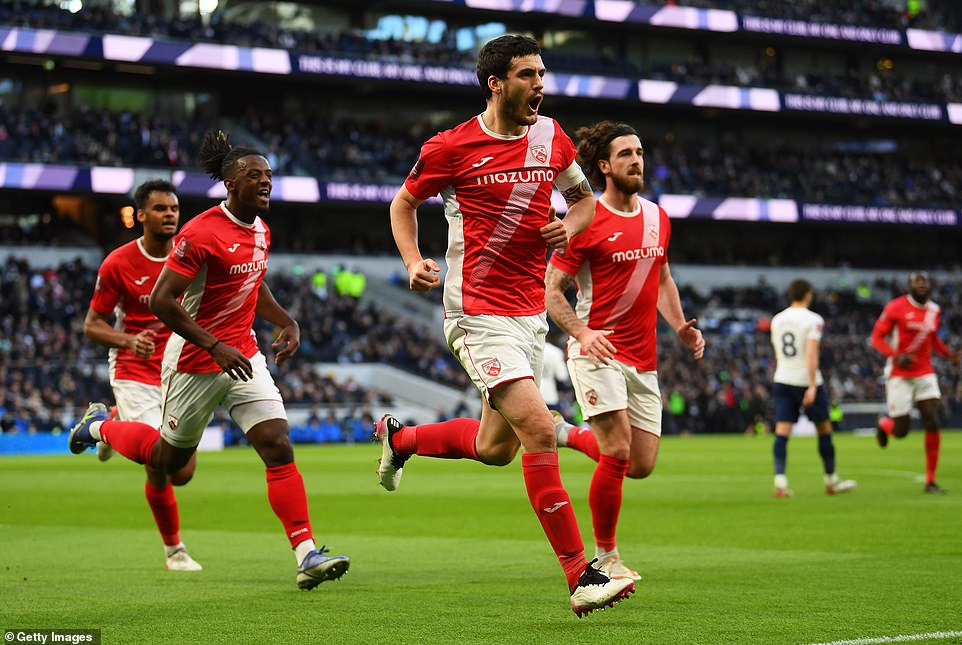 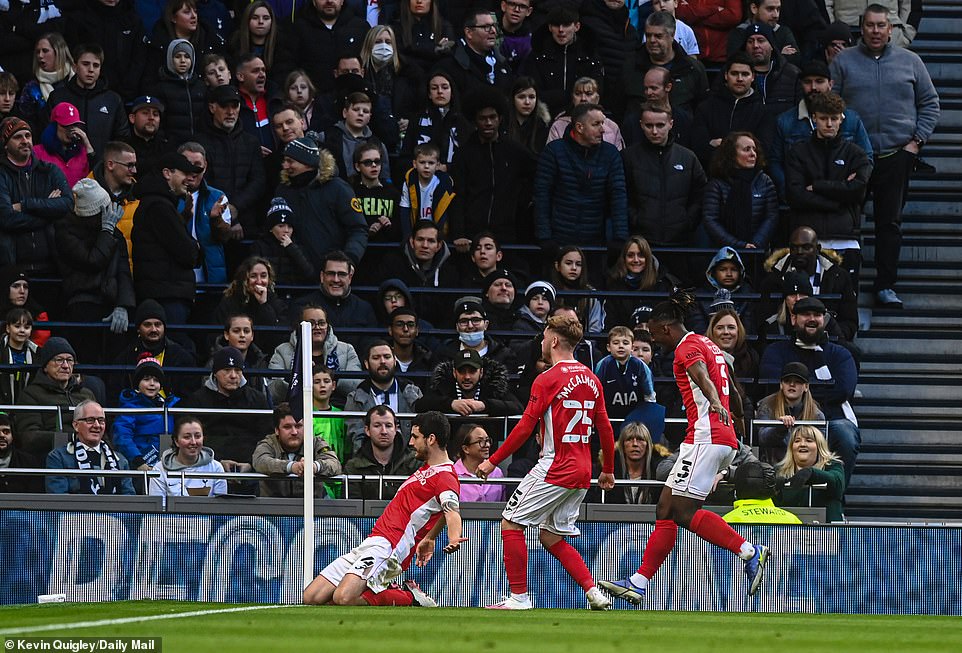 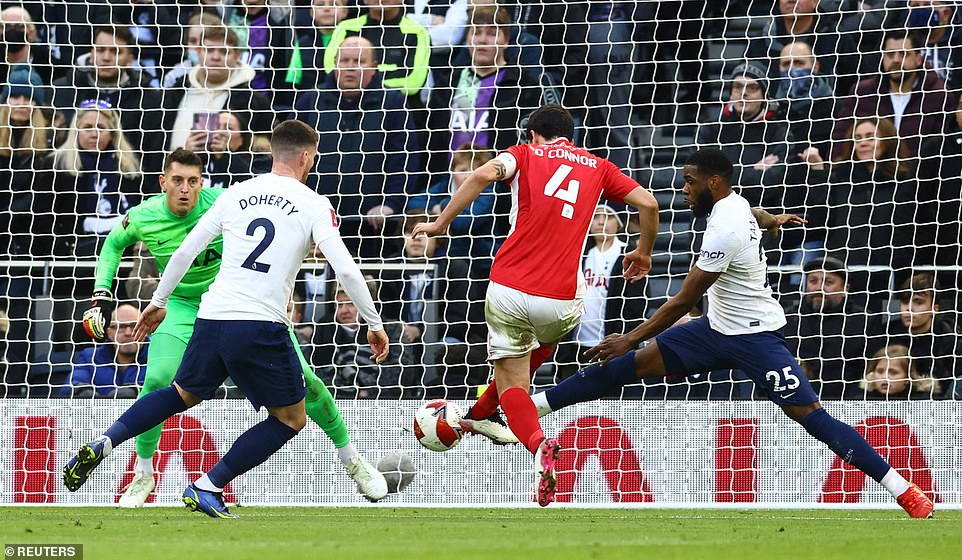 Ndombele had a shot blocked from a promising position after only 36 seconds, with Ben Davies heading the resulting corner over.

Spurs continued to dominate, without carving too many opportunities out, though they did hit the woodwork when Matt Doherty headed a corner against the frame at the far post.

Morecambe had offered little going forward but stunned the home side by taking the lead in the 33rd minute.

After some shoddy defending saw Joe Rodon concede a needless corner, Japhet Tanganga’s offence was even worse from the set-piece as he did not track O’Connor’s movement and the Shrimps skipper slotted home Alfie McCalmont’s delivery from close range.

Spurs were booed off at half-time by fans who are used to seeing their second-string side failing to deliver. 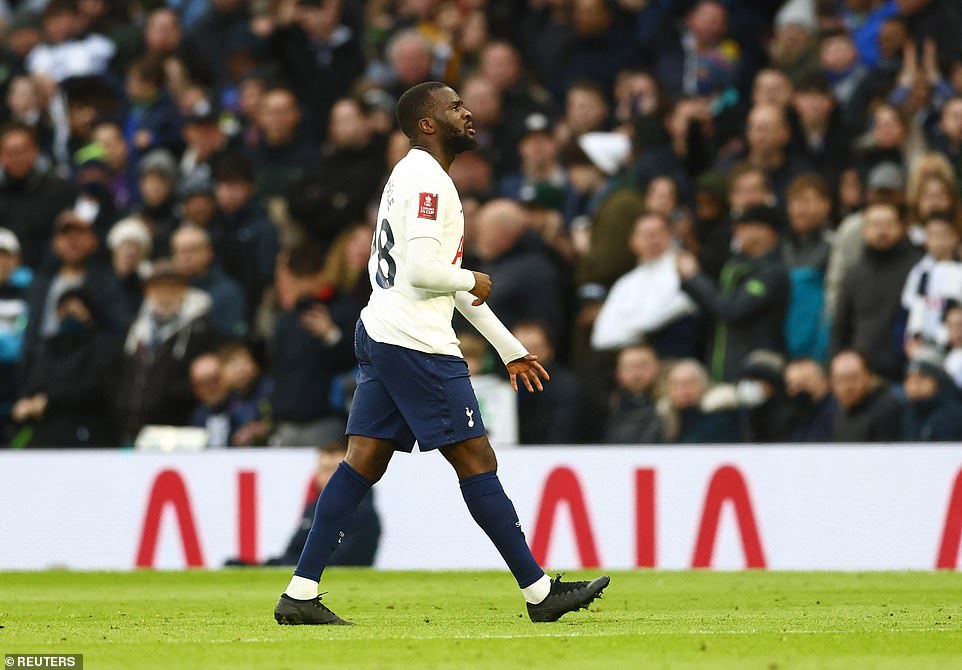 As Spurs struggled to break down Morecambe, Tanguy Ndombele was jeered off the pitch by home fans after he was subbed 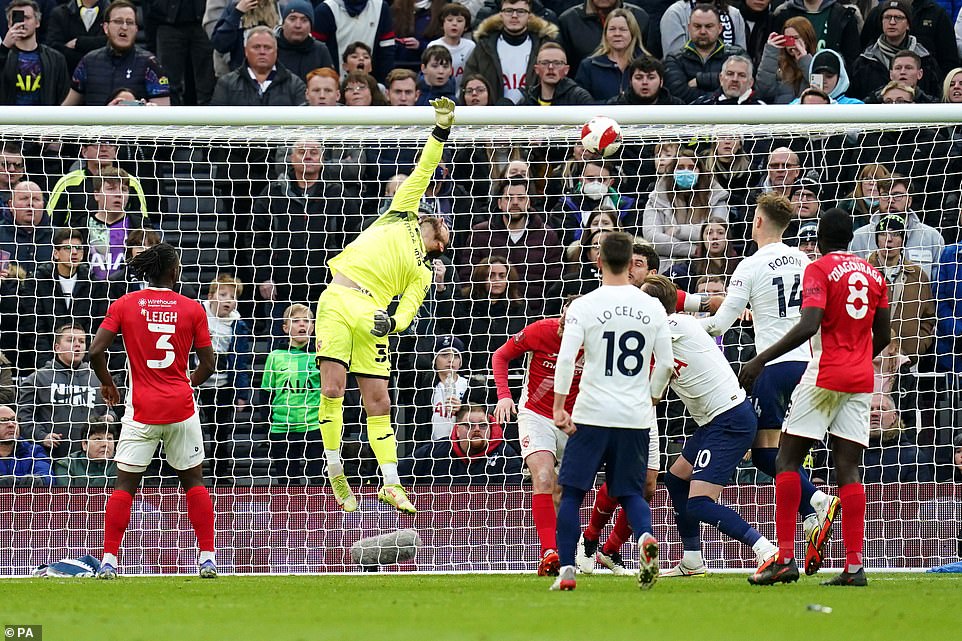 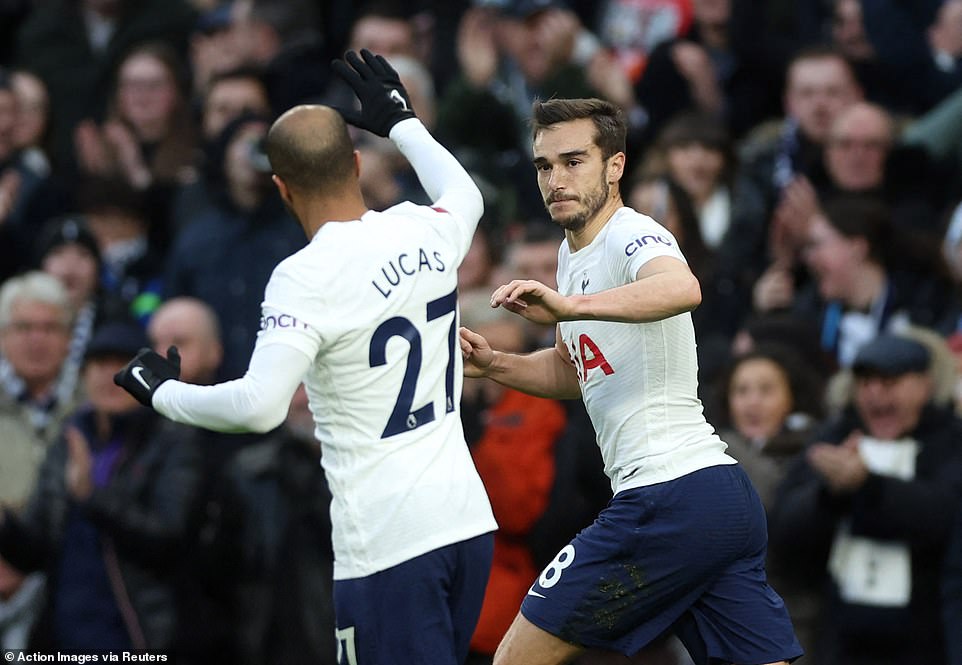 They created chances to level after the break but Dele Alli’s flick from a corner was well saved by Trevor Carson and Ryan Sessegnon shot wide after a loose ball fell to him inside the area.

Conte had seen enough and made a triple substitution with 21 minutes to go and it prompted Ndombele’s act of mindless defiance, which must surely spell the end of his Spurs career.

Ndombele was one of those taken off, but was not happy about it and proceeded to trudge across the pitch at a snail’s pace, appearing to go even slower when the home fans started voicing their anger.

The introduction of Moura and Kane changed the course of the game, though, as Spurs rattled off three goals in the final 16 minutes to win it. 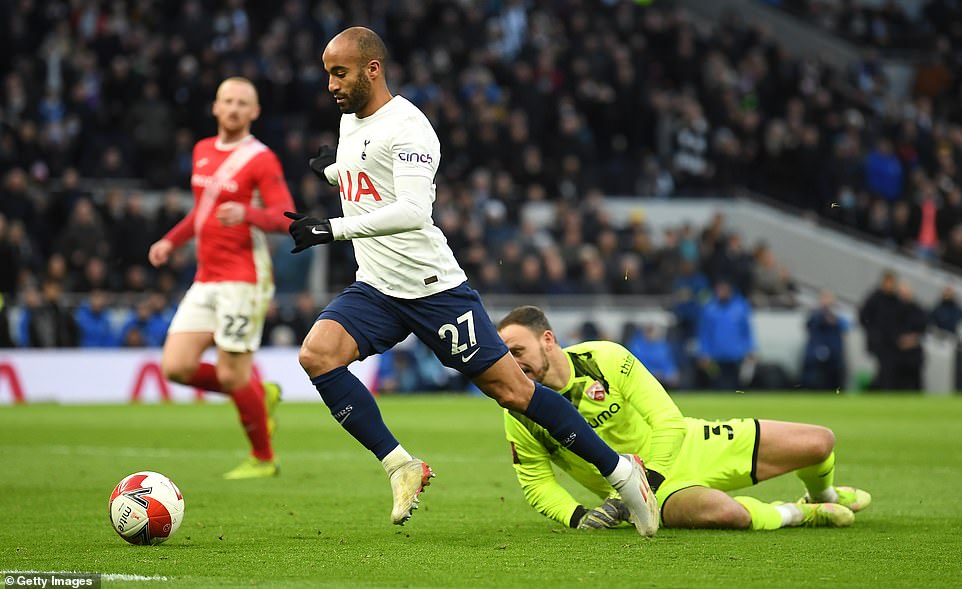 Spurs then pushed heavily for a winning goal, with Lucas Moura taking the ball past the keeper before giving them the lead 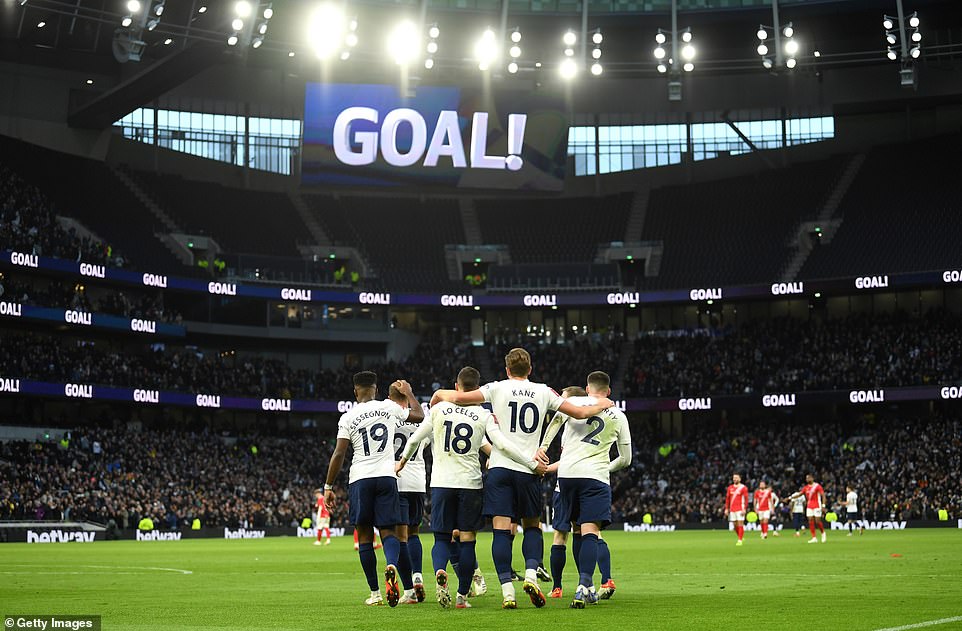 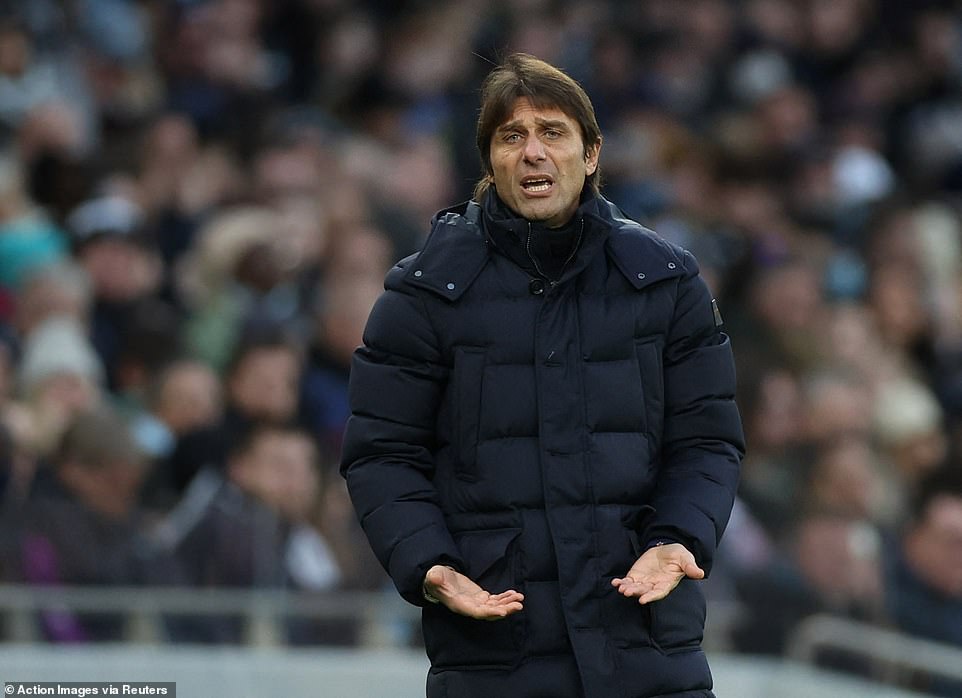 Despite securing progress into the fourth round, Conte will have been left seriously concerned with his fringe players

They needed a slice of luck to get level, as Winks’ free-kick was overhit, but it caught Morecambe goalkeeper Carson off the line and sailed into the far corner.

Moura completed the rescue act five minutes from time as he dispossessed Ryan McLaughlin on the halfway line, sprinted in on goal and calmly slotted home after rounding Carson.

Kane got in on the act as well, neatly tucking into the far corner after Giovani Lo Celso had teed him up. 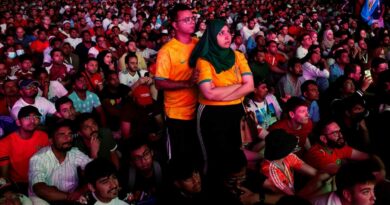 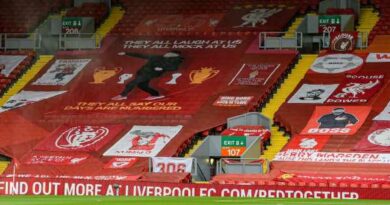