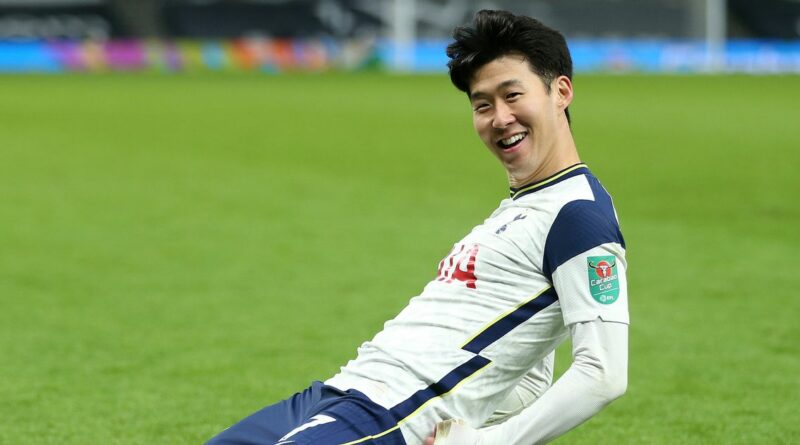 They belted out Ossie’s Dream on the tannoy at full time as Tottenham got themselves back to Wembley.

This is the club that used to enjoy being called a cup team, they would wheel out Chas and Dave on a regular basis to sing them a cup final song.

But it has been 13 years since their last piece of silverware, the 2008 League Cup, and that is exactly why they brought in Jose Mourinho in the hope of making them winners again.

Tottenham boss Mourinho, in his first full season in charge, loves this competition and you would not bet against him lifting it a fifth time no matter whether it is City or United from Manchester who they get in the final on April 25.

Mourinho’s glittering CV includes winning the trophy four times, three times with Chelsea and another one with Manchester United and he just knows how to get the job done.

It was not exactly pretty against Brentford, it was hardly in the mould of Tottenham’s glory days of the past when they won with style.

But, in true Mourinho fashion, they just got the job done thanks to Moussa Sissoko and Heung-Min Son breaking down Brentford’s brave resistance.

It was a feisty match which turned ugly when Brentford’s Josh Dasilva was sent off after 84 minutes for an X-rated challenge on Pierre-Emile Højbjerg.

Brentford boss Thomas Frank and his coaching staff were livid when referee Mike Dean produced a red card after checking his VAR screen as a big shout of “You’re a disgrace” went up from the touchline.

But Højbjerg rolled down his sock, showed a nasty gash on his shin and, at the end, Frank shook hands with Mourinho, apologised and did the same with a big bear hug for fellow Dane Højbjerg.

It ended in smiles, handshakes and apologies but also a place at Wembley for Spurs which used to be their second home once upon a time even before they borrowed it while the new White Hart Lane was being built.

Surely now Tottenham fans might begin to accept Mourinho as he starts to bring his winning DNA to the club and produce the success which evaded the likes of Mauricio Pochettino.

Tottenham were deserved winners even if Brentford battled and scrapped, making it difficult for their Premier League opponents.

The home side went ahead after after just 13 minutes when Sergio Reguilon broke down the left, the Spanish full back floated a brilliant cross which split the Brentford defence.

Sissoko got between defenders Ethan Pinnock and Mads Bech Sorensen and glanced home a brilliant header into the top corner which was Brentford keeper David Raya’s despairing dive.

Brentford never gave up, Ivan Toney saw a close range effort blocked by Serge Aurier and then the visitors’ top scorer also had a header chalked off following a VAR check.

It does seem unfair that VAR had not been used in the earlier rounds but was brought in for the semi finals and final, but ultimately technology came to the right decision.]

Tempers were beginning to flare up as the tackles flew in and yellow cards were dished out but the matter was settled after 70 minutes.

Harry Kane played the ball forward, Tanguy Ndombele then released Son who darted clear, then smashed his 16th goal of the season past Raya.

It was enough to push Tottenham into the final and Mourinho is now just 90 minutes away from more glory.