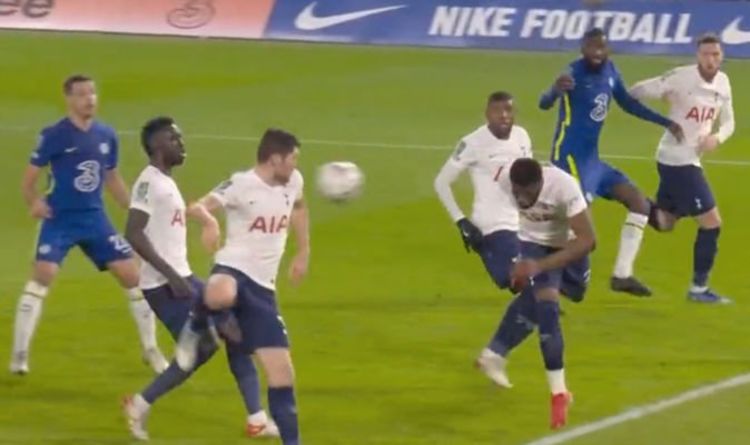 Tottenham Hotspur’s Carabao Cup semi-final first leg against Chelsea couldn’t have gotten off to a worse start. In his return to Stamford Bridge, Antonio Conte’s side endured a horror first half, conceding two calamitous goals to trail 2-0 at the break.

Tottenham’s semi-final couldn’t have gotten off to a worse start, being on the end of a dominant Chelsea first half on Antonio Conte’s return to Stamford Bridge.

In the fifth minute, the visitors were pressed into a mistake, leading to Kai Havertz stroking a shot past Hugo Lloris, which Davinson Sanchez touched home last.

But 10 minutes before the break, Tottenham’s first half reached a new low as Japhet Tanganga and Ben Davies combined to produce a comedic own goal.

JUST IN: Man Utd figure can prove worth as Ralf Rangnick devises plan

Fans unsurprisingly took to Twitter immediately after the farce to poke fun at Spurs, who have it all to do in the second half at Stamford Bridge.

One person said: “That own goal is the definition of Spursy.”

Another joked: “There’s a few contenders but that might be the most Spursy goal of all time.”

Tottenham haven’t lifted silverware since they won the League Cup in 2008, 14 years ago.

And as it stands, their long wait for a trophy will likely continue beyond Conte’s first season in charge.

Carabao Cup (League Cup) semi-finals are two-legged, meaning Spurs will still be in with a shout even if they are defeated 2-0 in west London.

However, all the signs point towards Chelsea extending their lead in the second half, which would all but kill the tie.

Juventus star Ronaldo 'set for another two weeks of isolation'