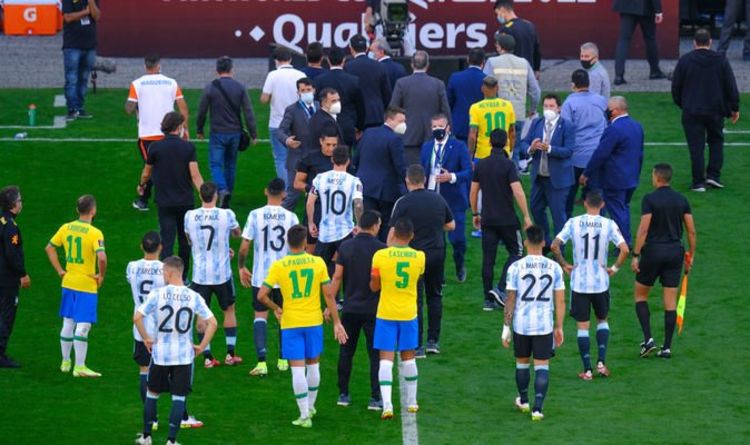 Tottenham are furious with the two players caught up in Argentina’s Covid storm in Brazil and will fine them when they eventually get back to England.

They are adamant that Giovani Lo Celso and new signing Cristiano Romero did not have permission to fly out for the World Cup qualifier in Sao Paolo that was abandoned after six minutes.

To make matters worse, it seems the pair have flown on with the rest of the squad to Buenos Aires, where Argentina are due to play Bolivia on Friday.

Spurs had hoped they would only take part in the more prestigious Brazil clash and perhaps be ready for the north London derby.

By the same token, Davinson Sanchez, who flew out to play for Colombia, will also be punished.

As soon as they realised their players had gone to South America without permission, Tottenham set up a 10-day training camp in Croatia where the trio could continue to train before returning the UK rather than flying back directly to sit in a quarantine hotel for a fortnight.

However, all plans were thrown into chaos when immigration officials marched onto the pitch to detain those in breach of the regulations shortly after kick-off.

The Brazilian authorities claim that Argentina’s Premier League players, which also include Emilio Martinez and Buendia from Aston Villa, failed to declare in their paperwork that they had been in the UK recently, which would have meant them serving a 14-day quarantine before they could play.

The Argentina FA claim to have been under the impression that the same arrangements were in place as there were for the Copa America earlier this summer, which enabled squads to circumvent Covid rules by travelling as a ‘bubble’. FIFA have launched an investigation.

The Premier League had unilaterally announced that no players from any of its clubs would travel to games in red-listed countries and are now working with FIFA and government authorities to prevent a repeat of the problems during the international breaks in October and November.