Tottenham have a deal in place to sign Lautaro Martinez if Harry Kane departs for Manchester City, it has been claimed. The England international is eager to leave north London behind. However, any move to Pep Guardiola’s side is far from straightforward.

It was reported earlier this month that Tottenham wanted to sign Martinez from Inter Milan.

Though the Serie A giants have already lost big names in Romelu Lukaku and Achraf Hakimi, the Argentina international may be the next player out of the exit door.

Arsenal are also admirers of Martinez, who propelled Inter to the Serie A title last term.

But Eurosport’s Dean Jones, speaking on The Football Terrace podcast, has claimed Tottenham have a deal in place to sign Martinez should Kane depart.

“The more this drags on the more I’m thinking Tottenham have a deal in place to sign Martinez if Kane goes,” he said.

“They’ve been an admirer of his for two or three years.

“And the plan leading into this was always that if Kane goes, they want to get Martinez. That’s what I’ve been told.”

Right now, however, Tottenham are holding firm when it comes to Kane.

The 27-year-old believes he’s entitled to leave the club having been left with the impression Daniel Levy would let him go if Spurs fail to qualify for the Champions League or win a trophy.

But Levy isn’t willing to let him go.

The Tottenham supremo wants a minimum fee of £150million to even take to the negotiating table as he plans for a brighter future.

City are only prepared to pay £120m at the current moment in time, meaning they’re still £30m short.

And whether Guardiola’s side are able to break Tottenham’s resolve, with the close of the summer transfer window edging closer, remains to be seen.

Kane was left out of the Tottenham squad for their 1-0 victory over City on Sunday.

And Sky Sports pundit Gary Neville took that to mean the England star was ‘gone’ and that a move to the Etihad would take place.

“I just read into the fact that every other England player that’s been part of the Euros has been involved this weekend either on the bench or in the squad,” he said.

“Harry Kane would be here today I feel if there was no doubt over his future.

“We have a lot of cameras around and I suspect we were looking for him everywhere. To not see him here today was a surprise.”

Neville also added: “There are no Premier League games this week and there is five or six days to do something. I do believe that to me he’s gone with him not being on the bench.

“I might be completely wrong and two weeks’ time I’ll be delighted to come here and watch him for Tottenham.

“They’ve all had very limited time for training. But at the very least they’ve been on the bench and Harry Kane ordinarily would be.

“He’s the most professional player you’ll ever see so something is going on.” 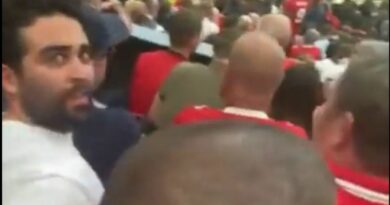