Netflix series Squid Game has taken the world by storm in recent months and it seems its influence has spread as far as Tottenham Hotspur.

South Korea’s hit TV series has been a viral sensation, with the dystopian storyline about ordinary people thrown into a nightmarish competition reaching eyeballs around the globe.

But Squid Game has gone way beyond being just a binge-worthy series everyone is watching.

It has inspiredCryptocurrency scammers,ecstasy pillsand now, it seems, football fashion choices. That is if Spurs fans are to be believed.

One of the defining images of Squid Game is the teal-coloured tracksuits the competitors in the show are forced to wear.

Clothing of that colour has reportedly been shunned in South Korea, where people don’t want to be associated with prisoners who are in vast sums of debt.

But theNew York Timesrecently reported that Squid Game had sparked an upsurge in the popularity of tracksuits in the USA.

And that appears to be the case with Tottenham, who have released an eye-catching teal tracksuit which reminds fans of their favourite Netflix series.

HAVE YOUR SAY! What do you make of the resemblance? Comment below.

The jacket, which Spurs call a “Teal Third Anthem Jacket 2021/22” and costs a whopping £75, is the same colour as the club’s current training kit.

But it also bears a striking similarity to the numbered tracksuits the unwitting competitors in Squid Game are forced to don.

Fans were quick to point that out – and crack jokes.

“Been playing the Spurs Game since ‘91 and still can’t find my way out!” joked another on Facebook.

“Conte bout to be the masked man,” wrote one fan.

“I wish we could play tug of war with Sanchez, Dier and Co,” added another.

Antonio Conte is known for his demanding style of coaching and intense training sessions but it seems unlikely that the Italian would take a leaf out of Squid Game’s book.

Conte has so far taken charge of two games since taking over from Nuno Espirito Santo, beating Vitesse 3-2 in the Europa Conference League before drawing 0-0 with Everton.

He will be hoping for another victory when Spurs take on Leeds United in the Premier League on Sunday. 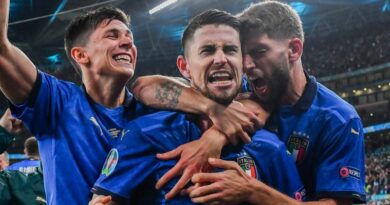 What Manchester United's rival managers have said about Paul Pogba