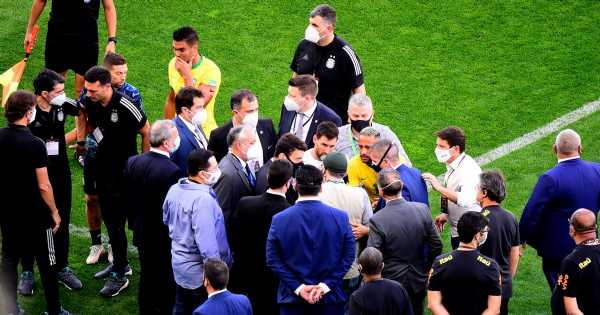 Tottenham intend to fine Giovani lo Celso, Cristian Romero and Davinson Sanchez for opting to ignore the club’s advice during the international break.

The Argentine pair and Colombia’s Sanchez decided to travel to South America to play in their country’s World Cup qualifiers.

Like all other Premier League clubs, Spurs did not want to let their players leave on international duty due to fears over coronavirus restrictions.

Lo Celso, Romero and Sanchez intended to return via Croatia in order to avoid a mandatory 14-day isolation period, but their decisions have now landed them in hot water.

Both Lo Celso and Romero started for Argentina against rivals Brazil in Sao Paulo on Sunday night, only to see the match descend into chaos.

Just seven minutes of the match was played before personnel from Brazilian health body ANVISA and the Brazilian Federal Police stormed the pitch to shut it down.

Lo Celso and Romero, as well as Aston Villa pair Emi Buendia and Emi Martinez, hired a private jet to travel to South America but were accused of not following Brazil’s coronavirus rules, which states travellers from the UK have to quarantine for two weeks upon arrival.

The Argentina pair are understood to have travelled back to Argentina with the rest of the squad on Sunday night ahead of Wednesday’s game against Bolivia.

Should Premier League clubs be able to stop their players from going on international duty? Have your say in the comments section below.

It is not yet known whether they will return via Croatia for Tottenham’s match at Crystal Palace on Saturday as originally planned, or stay on for the Bolivia game.

Whatever the case,The Athleticreports that Spurs will fine them and Sanchez, who played in Colombia’s 1-1 draw against Paraguay on Sunday.

The report says that Sanchez will miss Colombia’s next World Cup qualifier, against Chile on Thursday night, to return for Spurs duty, but Lo Celso and Romero’s actions are unclear.

The Argentina players could yet face further sanctions, if the Brazilian health officials get their wish.

"We got to this point because everything that ANVISA directed, from the first moment, was not fulfilled," said Antonio Barra Torres, director at Brazil's health regulator.

"[The four players] were directed to remain isolated while awaiting deportation, but they did not comply. They went to the stadium and they entered the field, in a series of breaches.”