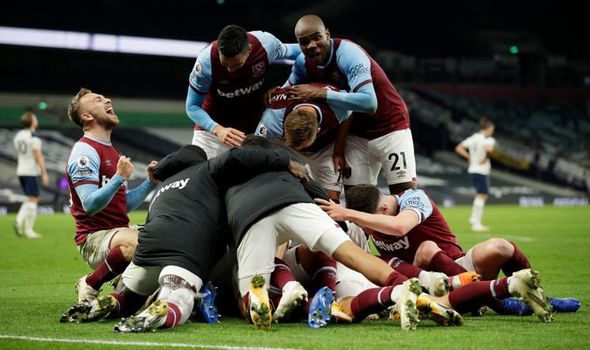 Spurs boss Jose Mourinho expects a tough test from the Hammers this afternoon, insisting: “The game against Arsenal was, in my opinion, a great performance with a very unfair result and they built from that game.

“They have very powerful people in this moment of the game, the offensive set pieces, and they are defending with a back line of five and four in front, leaving Antonio up front. If they follow the same direction it is a really difficult opponent.”

While West Ham manager David Moyes said: “I think we’re concentrating quite a lot on us, how we are and what we can do, rather than on what Spurs can do.

“I understand the abilities Gareth Bale has got and what he can do, but it would be wrong to think about him and not about Harry Kane or [Heung-min] Son the way they’re playing at the moment, because they’re on fire.

Please turn adblock off to access live match feed below

MARTIN SAMUEL: Rashford is not motivated by gongs but generosity
We and our partners use cookies on this site to improve our service, perform analytics, personalize advertising, measure advertising performance, and remember website preferences.Ok