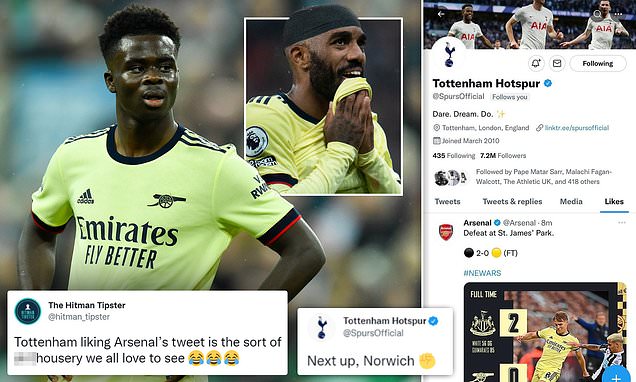 ‘The sort of s***housery we all love to see!’: Eagle-eyed football fans spot Tottenham’s account LIKING an Arsenal tweet confirming their defeat against Newcastle, with Spurs now needing just a point at Norwich to seal fourth spot

Football fans have spotted Tottenham mocking Arsenal after a defeat which massively damaged their race for a Champions League spot.

Knowing a win against Newcastle on Monday night would put them in pole position to secure fourth spot at the expense of their bitter rivals, Mikel Arteta’s side stumbled at St James’ Park.

A listless and lifeless performance saw them succumb 2-0 after a Ben White own goal and Bruno Guimaraes’ late strike, leaving them in fifth, two points behind Spurs with just one league game left this season.

The Gunners host Everton on the final day knowing they effectively need a win and are relying on Tottenham losing against already-relegated Norwich.

And when Arsenal’s social media account announced full-time in their defeat in the north-east, eagle-eyed supporters noticed how the Spurs account responded.

They liked their rivals’ tweet, with one fan saying: ‘Tottenham liking Arsenal’s tweet is the sort of shithousery we all love to see!’ followed by three cry-laughing emojis. 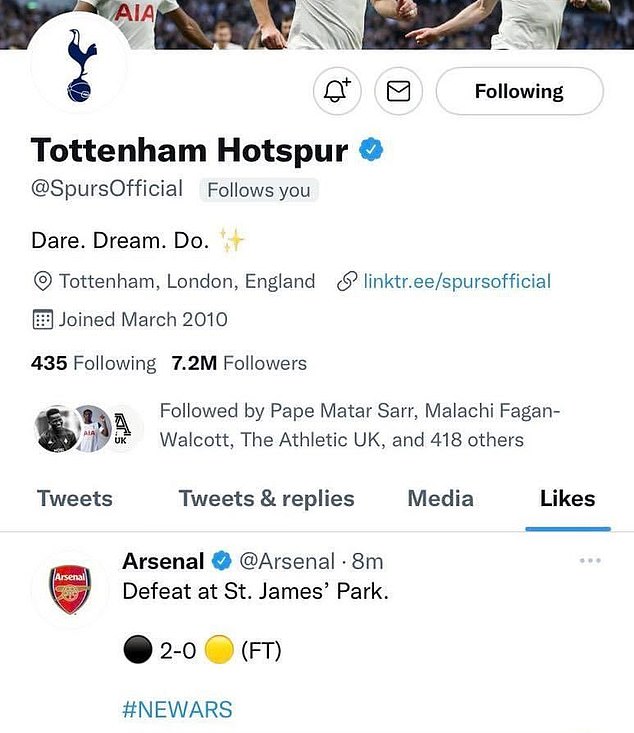 Their account then added another post of their own, adding: ‘Next up, Norwich’ followed by a raised-fist emoji.

The relationship between the two clubs has always been strained, to say the least, but was further worsened on Thursday.

In the final North London Derby of the season, Tottenham ended up winning 3-0 in contentious circumstances. 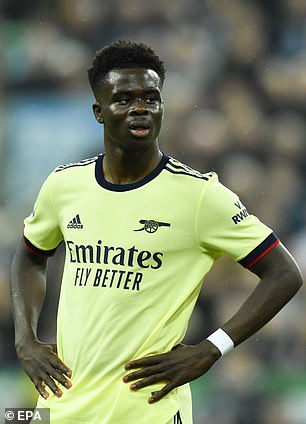 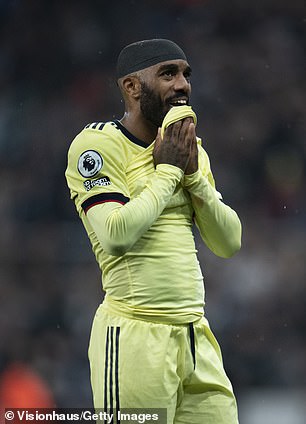 The Gunners suffered a damaging loss at St James’ Park; Spurs are in pole position for fourth

At full-time, Spurs then posted about their upcoming clash with Norwich on the last day of the season, which could see them secure a Champions League spot at the expense of their rivals

Harry Kane scored a disputed penalty, Rob Holding was sent off after half an hour for consistently fouling Son Heung-min, before Kane and Son made it 3-0.

Arsenal manager Mikel Arteta looked furious during and after the game, and despite the referee’s decisions appearing correct insisted he would be ‘banned for six months’ if he said what he wanted to about the officials.

Spurs boss Antonio Conte then responded by saying the Spaniard needs to stop complaining – and it appears the Italian has had the last laugh. 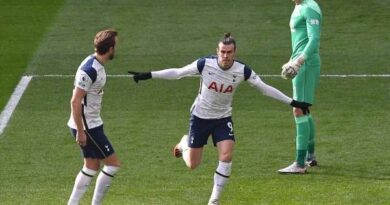