PLAYER RATINGS: Aaron Ramsey and Gareth Bale shine – despite THAT penalty miss – as the big guns step up to deliver a famous victory in Baku… but it is a night to forget for Turkey’s Burak Yilmaz

Wales are on the brink of reaching the last-16 of Euro 2020 after a gripping 2-0 victory over Turkey in Baku.

Aaron Ramsey slotted home shortly before half-time for Wales, with Robert Page’s men repelling Turkey’s pressure in a valiant second half display. Connor Roberts poked home late on from close range in the second half after a moment of magic from Gareth Bale, who also missed a penalty. 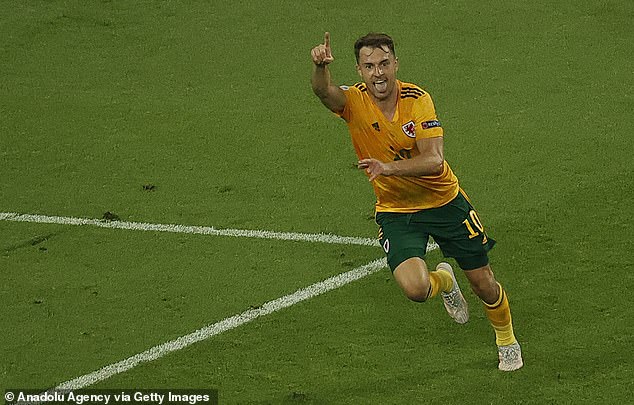 Ugurcan Cakir – Good early save to deny Ramsey but nothing he could do with either goal. A good save from a low Bale header in the second half. 6

Mehmet Celik – Tripped Bale for the penalty and before that, had the unenviable task of coming up directly against Daniel James, who is central to how Wales attack. He didn’t look like he enjoyed any of it very much. 4

Kaan Ayhan – Got away with one thanks to Soyuncu late on in the first half, playing an errant ball across the halfway line that Bale intercepted. 5

Caglar Soyuncu – Outstanding last-ditch block to deny Moore in the 19th minute. He then slid in brilliantly on Gareth Bale to snuff out a Wales counter attack after Ayhan lost the ball. 7 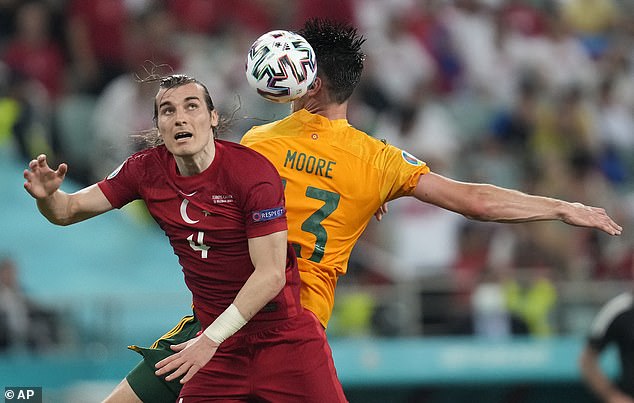 Umut Meras – Much like his side, had a better second half than first but ultimately couldn’t help produce a decisive moment for his team. 5

Okay Yokuslu – Struggled to have much impact on play for his team and was an obvious candidate to be replaced at half-time. 5

Kenan Karaman – Failed to get on the ball and influence play the way that some of his fellow attackers managed to. Saw plenty of the ball in the second half but didn’t play with much urgency. 5

Hakan Calhanoglu – Turkey’s talisman had been quiet in the first half but sent a sumptuous pass into Under early in the second, for whom the angle was too tight to score. 6 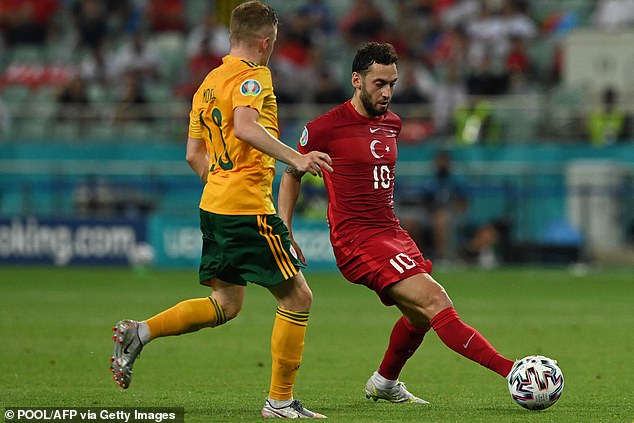 Hakan Calhanoglu, one of Turkey’s key players, had a quiet night and struggled against Wales

Ozan Tufan – Pretty much anonymous in the first half and can have no complaints about being taken off at the interval. 5

Cengiz Under – looked sharp early on and tested Ward with a half volley on the turn in the 13th minute. One of Turkey’s livelier attackers. 6

Burak Yilmaz – Missed a sitter early in the second, blazing over from six yards. Was busy throughout, his hold-up play and aerial ability key to Turkey’s play when they looked to go direct. But his performance is defined by the miss. 4 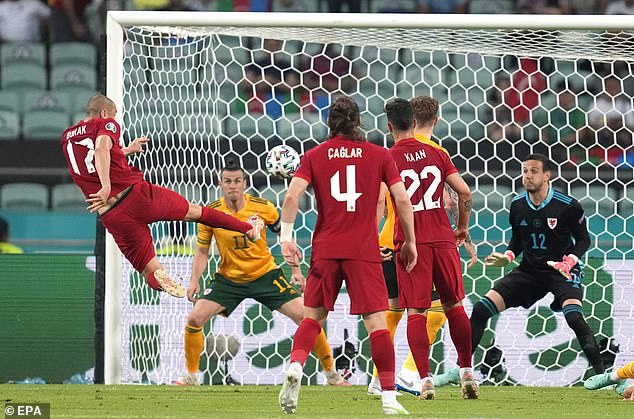 Danny Ward – He hadn’t been called into as much action as against Switzerland until the 88th minute when he made a super stop to keep Demiral’s header out. 7

Connor Roberts – When Wales had possession, Roberts would bomb so far forward that the defence became a back three. Set Ramsey up with a half-chance after persevering with the ball in the second, which summed up his battling display. Had a simple job in poking home in stoppage time after Bale’s brilliance. 7

Chris Mepham – Good block on Yilmaz early on after a slick Turkey move from a free-kick, much to the dismay of Turkey’s captain. Battled well in the second as Wales and relished coming up against the Turkey captain. 7

Joe Rodon – Stepped up excellently for Wales in the latter stages as Turkey piled on the pressure. 7 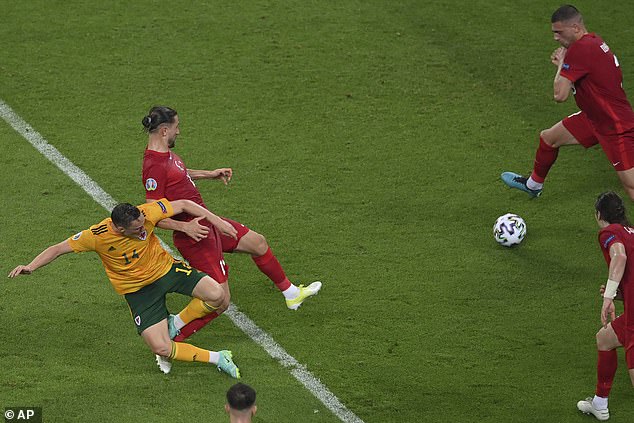 Ben Davies – The Tottenham man’s big-game experience is vital for Wales and helped when Turkey stepped things up in the second half. Intervened with a couple of crucial headers to keep Turkey at bay. 8

Joe Allen – Barely put a foot wrong in possession in the first half, always finding another team-mate with the ball. Kept things ticking over in the second, when his comfort in possession was much needed. 7

Gareth Bale – Outstanding first half display, creating three super chances for team-mate Ramsey from deep. Was fouled for the penalty but won’t want to watch his effort back again any time soon. An awful spot kick and thankfully for him, it didn’t matter. A piece of brilliance for Roberts’ goal. 8

Joe Morrell – Turned a header from Kaan Ayhan away off the line as Turkey stepped things up towards the end of the first half. Worked tirelessly alongside Allen. 6

Aaron Ramsey – Third time lucky for the Juventus man. He combined superbly with Bale throughout but missed two great chances to break the deadlock. Then, it was a tremendous  finish just before the break, cushioning Bale’s pass with his chest before slotting home. Made a super late tackle to deny Muldur. 8 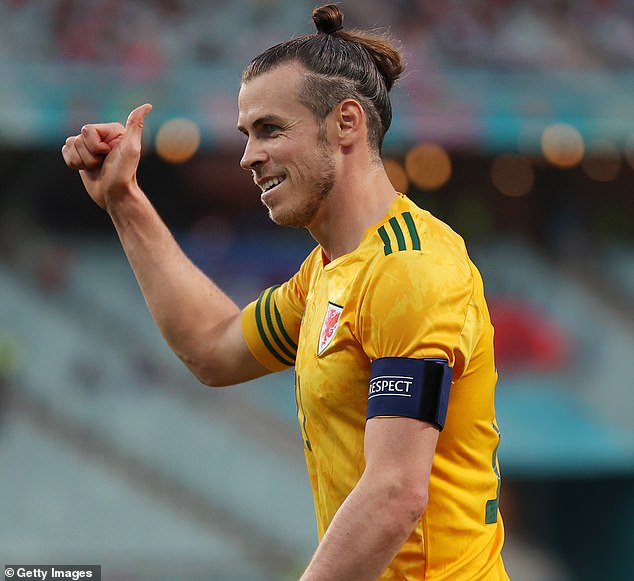 Despite missing a penalty, Bale produced a vital display for Wales as they ran out 2-0 winners 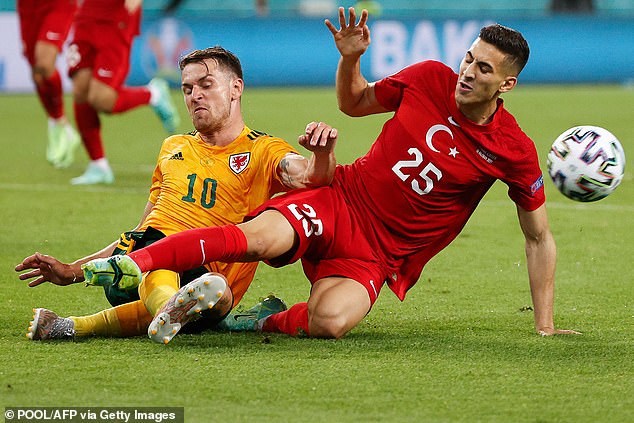 Daniel James – Picked up where he left off against Switzerland. Bale and Ramsey will get most of the attention but the pace and flair of the Manchester United man should not go unnoticed. 7

Kieffer Moore – Two games for Wales and two bloody noses for Moore. He puts in some hard yards for his country but looks like he relishes it. 6

Is England vs Iceland on TV? Kick-off time, channel and how to watch Nations League fixture