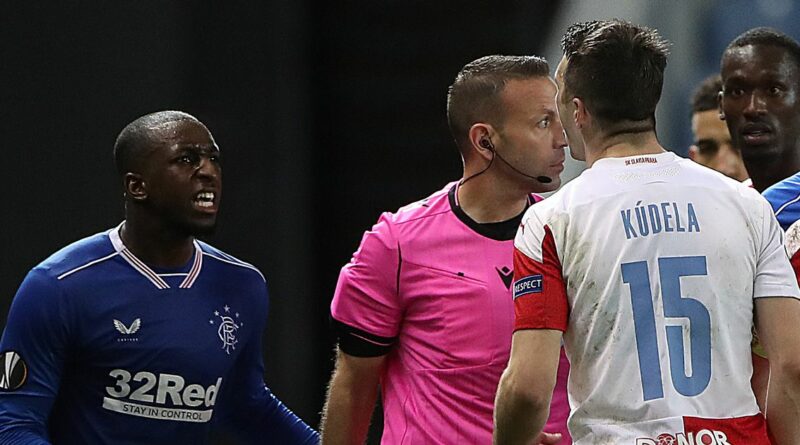 UEFA have been accused of “tokenism” in their approach to Slavia Prague star’s Andrej Kudela’s ban for alleged racist abuse towards Rangers’ Glen Kamara.

The defender was accused of abusing his player during the Europa League round-of-16 second-leg game at the Ibrox.

Gers boss Steven Gerrard said the Czech defender said something to the forward while covering his mouth, calling on UEFA to investigate.

And the organisation in charge of European football have responded with a provisional one-match suspension, ruling the 34-year-old out of the quarter-final first leg against Arsenal.

But Kamara’s lawyer Aamer Anwar has slammed UEFA for only making a symbolic effort with regard to the incident.

The legal representative’s statement reads: “Kudela will not be allowed to play the Europa League match against Arsenal, which also means that Police Scotland will not be able to question him on Thursday with regards to their criminal investigation against him.

“I understand that Police Scotland have a sufficiency of evidence to proceed with charges against Kudela, without the need to speak to him.

“Whilst UEFA have carried out an initial investigation which makes damning reading about Kudela’s conduct.

“The initial one match ban does little to instil confidence in UEFA being serious about stamping out racist in football and they must take robust action going forward.

“The defence put forward by Slavia Prague can only be described as incredible or fantasy.

“A one match ban will make no difference whatsoever to Kudela or Slavia Prague, who were already claiming he was too ill to travel to Arsenal.

“A one game suspension smacks of ‘tokenism’ and gives little confidence to black players who face such vile abuse.

“The overwhelming evidence against Kudela means UEFA must take immediate action to punish him robustly for the crime he is accused of.

“A full statement will be issued once (we) have had the opportunity to consider the findings of the initial investigation.”

Man Utd fans react to Wayne Rooney talks over surprise Derby gig – Why could he go?

Liverpool news: Why Jurgen Klopp is not happy with Xherdan Shaqiri – Raphael Honigstein