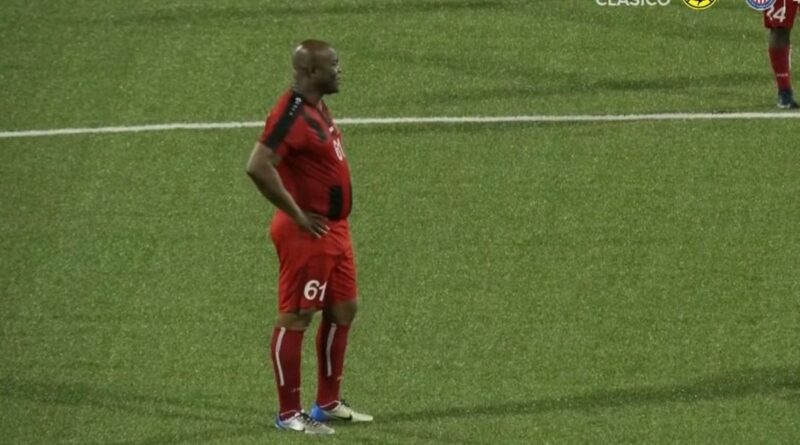 Suriname Vice President Ronnie Brunswijk is known as a politician, businessman, former rebel leader and now in an astonishing turn of events a 'professional' footballer.

The 60-year-old is chairman of SVB Eerste Divisie side Inter Moengotapoe where he is also registered as captain of the team.

The club have won six of the past seven top flight championships and qualified for the CONCACAF League for the first time in their history by finishing as runners-up in the 2021 Caribbean Club Championship.

Their continental debut came on Tuesday evening but didn't go according to plan; the Suriname side lost 6-0 to Club Deportivo Olimpia from Honduras.

Yet the scoreline wasn't what made the headlines with Brunswijk opting to start himself in midfield with son Damian, an actual footballer, upfront.

The 60-year-old captained the side for 54 minutes until he was substituted with Inter already 3-0 down.

The final score at Ronnie Brunswijkstadion was 6-0 to Olimpia with the SVB Eerste Divisie side also having a man sent off; Brunswijk's replacement was given his marching orders just nine minutes from time having been on the pitch for just over half an hour.

If you owned a football club, would you start yourself? Let us know in the comments section.

But it wasn't all doom and gloom for the Suriname Vice President; Brunswijk became the oldest ever player to feature in an international competition at 60 years and 198 days.

He also finished the match with an 82% pass completion rate, succeeding with 14 of his 17 attempted passes.

The second leg of the Last 16 CONCACAF League match will take play on September 29 in Honduras.