The equation for Melbourne Victory's W-League team when they face Sydney FC on Saturday afternoon is simple: win and you will finish second and get a home final in the first week of the play-offs, probably against the same opponent.

A draw will mean they make the finals, but in third or fourth position, dependent on other results, and have to travel in the first week of the finals.

But a loss – although it would have to be by a heavy margin – could see them even drop out of the finals race altogether. 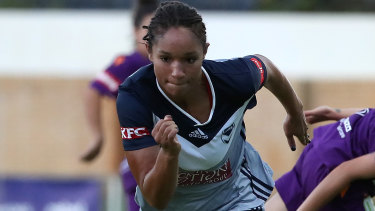 American winger Darian Jenkins is clear to play despite complaining mid-week of back pain.Credit:Getty Images

That is highly unlikely, however, as Western Sydney would need to win away in Perth and Brisbane would have to become the first team all year to beat runaway premiers plate winners Melbourne City when they visit AAMI Park on Sunday.

He has a full-strength squad to choose from – although there was an injury scare during the week when American winger Darian Jenkins complained of back pain. She is, however, clear to play.

Victory are coming off the back of a 7-0 win over Newcastle last time out, a win, says Hopkins, which was vital after they had lost 4-0 to City  in their previous match.

''The game the previous week was pretty tough for us, but the reaction from the players was excellent," Hopkins said.

''We took responsibility on our own shoulders and we decided first session back when we had a team meeting that we would just move on from it. And we got a fantastic reaction.

''We needed it to boost our goal difference. But there's nothing like putting the ball in the back of the net just to reaffirm you are on the right track. We could have got double figures that day.''

Tottenham vs Arsenal result: Five things we learned as record-breaker Harry Kane takes down the Gunners