The official didn't blow for a foul when Dries Mertens jumped into Van Dijk's chest, with the forward leaving the Dutch defender injured on the ground as he ran away to fire his side into the lead at the Kop end.

Dejan Lovren's second half header rescued a point for the Reds, but they were unable to get the win that would have turned next month's trip to Red Bull Salzburg into a dead rubber.

"I didn't go down for no reason," Van Dijk told beIN Sports after the game.

"I won the ball. Obviously I think he [Mertens] didn't even want to challenge the ball at first, so he touched me.

"I think it's a foul, the referee didn't have his best day today, and that is what it is."

Despite the failure to win, Van Dijk excused Liverpool's performance on a frustrating evening for home fans, and says he's fully confident that the European champions will still reach the knockout stages.

"So far this season we have never panicked," he said of going 1-0 down.

"Obviously it's a pity to concede and the way we conceded as well but we had to do what we planned to do and I thought the second half was good. "We kept pressing and going at them and they had no opportunities apart from the goal, but we are disappointed not to win today.

"It's difficult but it's good to face difficult challenges.

"We know it will be tough but we're ready for it. We have to be ready for a difficult night, and we will be." 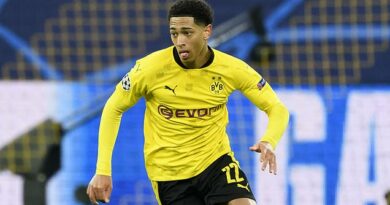 Bellingham CAN report to England's squad in boost to Gareth Southgate