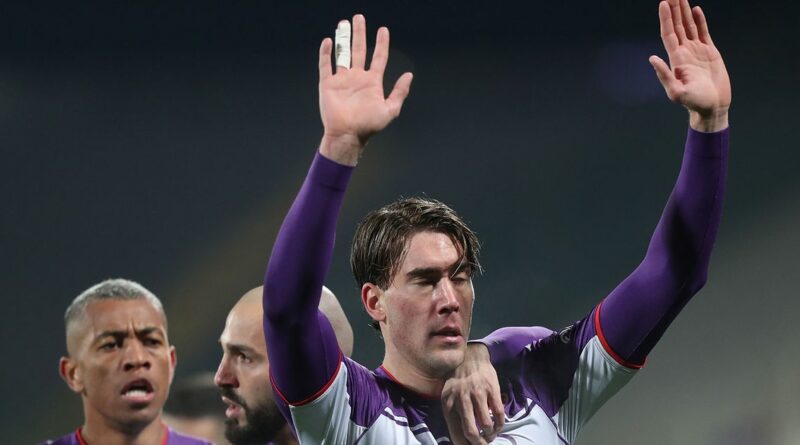 Arsenal transfer target Dusan Vlahovic appeared to wave goodbye to Fiorentina fans during their match against Genoa on Monday night.

The Gunners have reportedly reached an agreement for Vlahovic, who has also been attracting interest from Tottenham, Barcelona, Inter Milan and Real Madrid during the January window.

According to reports in Italian publication La Stampa (via Sport Witness), Arsenal have made a bid of around £62million for the striker, which includes Lucas Torreira – who is currently on loan with the Serie A outfit.

Fiorentina are said to be in agreement over a deal, and although both clubs are in the dark regarding what Vlahovic wants to do, his intentions seemed pretty clear on Monday night.

The 21-year-old scored his 20th goal of the season in all competitions as Fiorentina hammered managerless Genoa 6-0 at the Stadio Artemio Franchi.

Vlahovic netted the fourth goal of the evening, latching onto a high ball over the top before bringing it down and lobbing a helpless Salvatore Sirigu.

Yet it wasn't the finish that had people talking on social media, rather the celebration.

After watching the ball bounce into the empty net, Vlahovic ran across to the corner flag and raised his arms high above his head.

Will Arsenal sign Dusan Vlahovic? Let us know in the comments section.

Excited Arsenal supporters were quick to pick up on the Serbian's celebration on social media.

One person said: "Great touch and finish with a wave goodbye to the fans at the end of his celebration."

Someone else added: "Winner in the NLD pending."

A third user commented: "Do/pay whatever it takes to get this guy! He's got everything!"

However, others pointed out that he might have been apologising for missing a penalty earlier in the match.

Wijnaldum only moved to the French capital last summer but has found playing time hard to come by.

The Telegraph claims he is keen on a move to London, which could put Arsenal at the front of the queue for his signature.