A long 24 hours for Waterford at least ended with some solace tonight.

Second half goals from Shane Duggan and Zack Elbouzedi at the RSC at least punctuated the grief inside the stadium caused by their shock Europa League expulsion.

Waterford football has been deep in the news this week and not for the right reasons.

John Delaney, who rose through the FAI ranks after representing the club on the national council, is no longer part of the association, according to Sport Ireland’s chief executive John Treacy.

It that wasn’t enough of a bombshell, then Thursday’s developments about Waterford’s European place was atomic. For all the public expressions of optimism conveyed by Delaney and his League Director Fran Gavin about the club receiving an exemption to the three-year rule from Uefa, it ultimately died a death. Recriminations have followed, not just from Waterford owner Lee Power, insistent they will pursue compensation from the FAI, but also in the stand last night.

Waterford’s fans had stayed loyal to their local legislator in recent weeks while other clubs didn’t hold back but they made their feelings known with a barrage of chants against Delaney last night.

Duggan’s wand of a left-foot supplied the breakthrough with 15 minutes left before Elbouzedi replicated his contribution from Turner’s Cross in February by breaking away to notched the second deep into stoppage time.

Graham Cummins, although deployed wide on the left, was still drift into the centre and his close-range volley on the half hour was spilled by Matt Connor.

Although Garry Buckley followed in to score from the rebound, he had strayed into an offside position and it was disallowed.

By that stage, Kevin Lynch had gone close with a curling free-kick which Mark McNulty tipped over. Waterford finished the first half the stronger, with Zack Elbouzedi blazing a sitter over the crossbar and Bastien Héry driving a ferocious 25-yard drive wide of the near post.

Duggan had been a composed presence in that opening half and opted to complement the attack with the game opening up after the break.

On 52 minutes, he cut back onto his left foot, forcing McNulty to dive full-stretch to palm away his curling shot heading for the top corner.

Waterford’s dominance began to tell as Rory Feely’s header was kept out only by Dan Casey’s goal-line clearance.

With Cork retreating, the Blues sensed blood and their former midfielder Duggan was the one to strike first.

He was afforded too much time 20 yards out to shimmy past his marker and unleash a shot which zipped beyond McNulty. A slight deflection on the way seemed to wrongfoot the Cork goalkeeper as was too late reacting.

Cork failed to muster much by way of a comeback aside from a half-chance for substitute Dan Smith which Waterford repelled by conceding a corner.

When the resulting delivery was cleared, Elbouzedi showed his pace by darting all the way up the pitch to stroke the ball past the advancing McNulty. 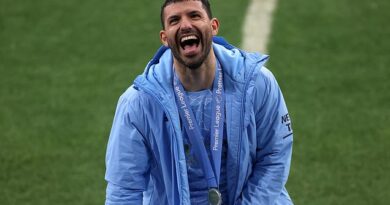 Aguero will attend unveiling of his statue outside the Etihad Stadium