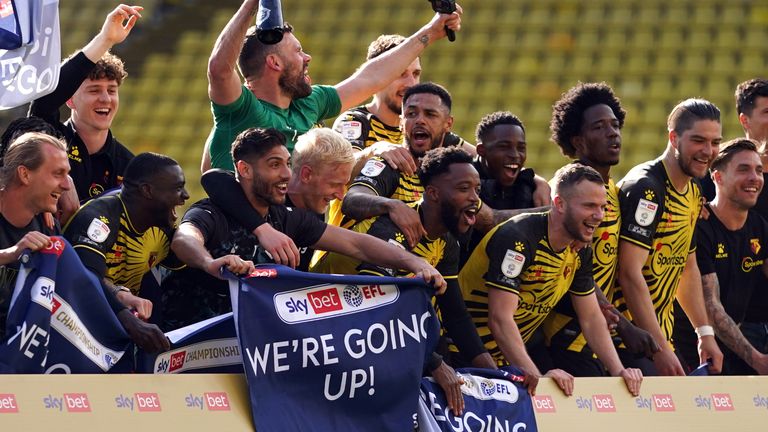 Ismaila Sarr’s penalty early in the first half proved to be just enough to earn Watford a 1-0 victory over Millwall and confirm an instant return to the Premier League.

Brentford’s win at Bournemouth earlier in the day meant that only three points would be good enough for Xisco Munoz’s Hornets to be promoted alongside Norwich, who came down with them last season.

Millwall came close on a number of occasions to delaying a promotion party that traditionally sees Hornets fans jump in a town-centre pond, but Watford hung on.

Xisco made a single change to the side that had won at already-promoted Norwich on Tuesday, with Kiko Femenia returning from a ban at right-back to oust Craig Cathcart. Millwall made three changes to the line-up that lost 4-1 at home to Bournemouth the day after.

Jed Wallace forced Watford goalkeeper Daniel Bachmann into a routine save in the opening exchanges that were brought to life by a penalty awarded to the hosts in the 10th minute.

Femenia’s burst forward saw the Spaniard exchange passes with Sarr, who was brought down just inside the box on the right by Billy Mitchell’s lunge.

Sarr stepped up to slot the spot-kick past goalkeeper Bartosz Bialkowski with ease a minute later.

Millwall looked lethargic but Bialkowski was able to get behind Dan Gosling’s header from a free-kick conceded by Mason Bennett’s challenge on Sarr.

Joao Pedro saw a shot blocked from another move that opened up the Lions and Will Hughes was only just off target from a half-cleared corner.

Set-pieces seemed the most likely source of Millwall retaliation, with Tom Bradshaw firing just wide from a free-kick Watford could not get away. Femenia had to go off after half an hour after ending up on the turf in front of the dugouts and – suddenly – Millwall twice went close to an equaliser in a matter of seconds. Bachmann dived to parry Mitchell’s shot before Bennett’s deflected effort clipped the bar.

The half ended with Millwall on top but still trailing, and the second soon saw Bradshaw clip an effort just over the Hornets’ goal.

Bennett was back within seconds for another shot that was too high and the Hornets were caught out again when Bradshaw got in behind Francisco Sierralta but Scott Malone was unable to profit from the cross that followed.

Watford made a double change on the hour, with Nathaniel Chalobah and Andre Gray coming on, and felt they should have been awarded another penalty straight away when Sarr went down under Mahlon Romeo’s nudge in the back.

Bachmann had to claw away Bradshaw’s deflected header from yet another free-kick, while Gray saw a glancing header saved at the other end.

‘Sarr the dangerman for Watford’ 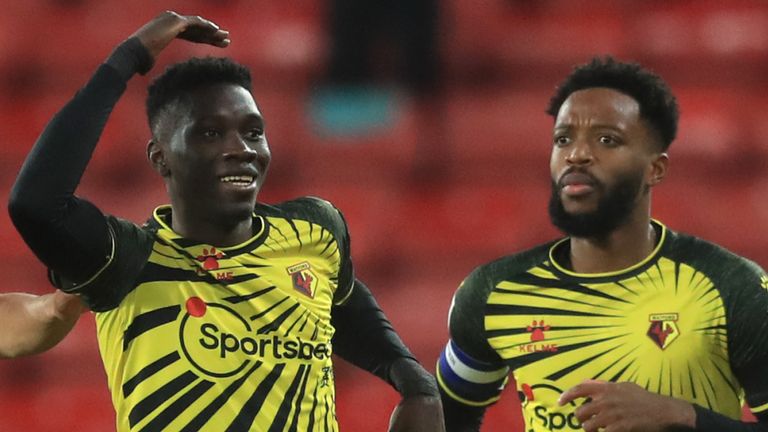 “Watford were efficient. I’ve watched them a few times recently and they’ve chipped away at the games and it’s been enough. Fair play. They settled the nerves early with the penalty – Sarr is their real dangerman – and as soon as they got in front, you didn’t see them getting pegged back.

“They’re very strong, very solid but they’ll need a lot more next season. Will Sarr do it next season? He dipped in the Premier League last time but he’s a handful. The big advantage he’ll have is that teams will come out and have a right go and he is lightning; there’s going to be a lot of grass for him to run into.

“He gets his head up, he’s a good player and I think he’s one who’ll find it easier in the Premier League. But he’s going to need players around him to give him the ball.” 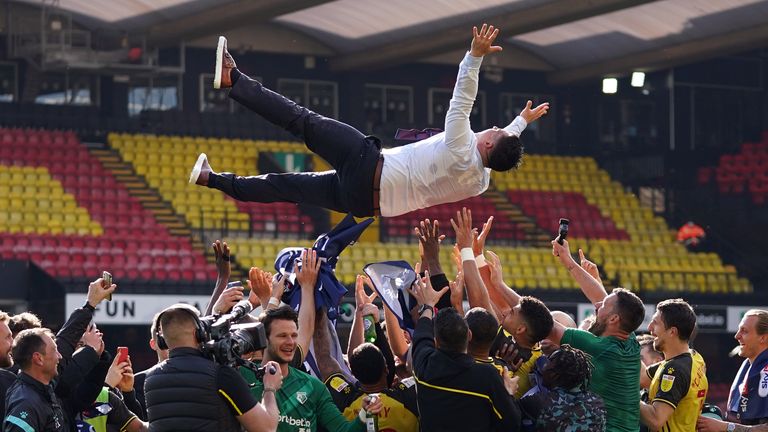 “He’s been great, not only as a coach, but as a human being. He’s been brilliant, he deserves all the credit. When you look at earlier games, you can see when managers and players aren’t connected, he’s got players running through brick walls for him. That’s the sign of a great coach. He always puts it on the players, but it’s a great time for everybody.

“There’s loads of people that deserve it, fair play to the ownership, they could have chopped everybody, sacked everybody during the pandemic, they’ve kept all the office staff on, but they believe in us and we’ve taken them back to the Premier League.”

Liverpool should complete "clever bit of business" in next 24 hours, says Murphy