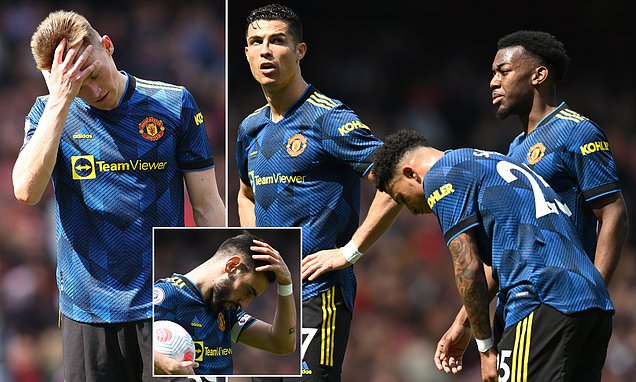 ‘We CAN’T be satisfied. We have to go home and look at ourselves in the mirror’: Scott McTominay gives emotional rallying cry to Man United team-mates after losing to Arsenal and admits the team are lacking in ‘self belief and confidence’

Scott McTominay admitted Manchester United are in disarray from top to bottom after their season hit a new low at Arsenal that prompted Ralf Rangnick to admit their top four hopes are over.

McTominay gave a startling insight into the scale of United’s issues as he underlined the size of the mammoth task facing incoming manager Erik Ten Hag to revive the club following their error-strewn defeat at The Emirates.

It was also one which backed up a conversation club legend Paul Scholes revealed he had with Jesse Lingard in which the midfielder allegedly described the United dressing room as ‘a disaster.’ 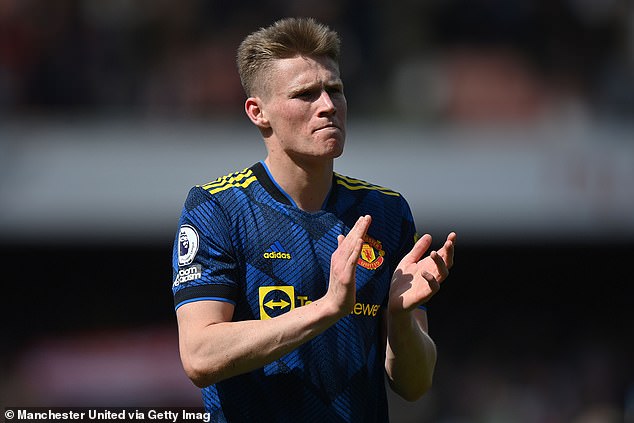 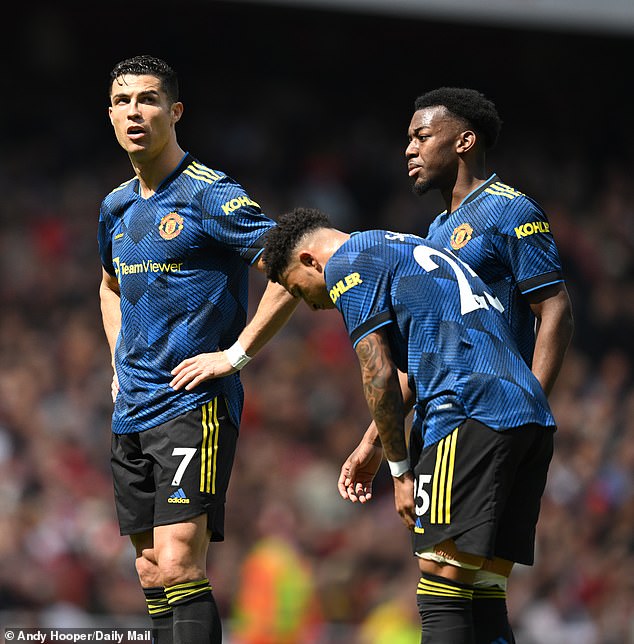 McTominay said: ‘There’s a whole load of problems in terms of players, staff, everything higher up. There are a lot of things going on at the minute.

‘For us, self-belief, lack of confidence — you can see it all in the last two months

‘When we get back in the dressing room it’s go home and take a look at yourself in the mirror.

‘You can’t go back to your house and be satisfied with conceding thee goals away at Arsenal when we deserved to win the game.

‘The last four games are about pride for us, going out on the pitch and showing a bit of balls with your performances. 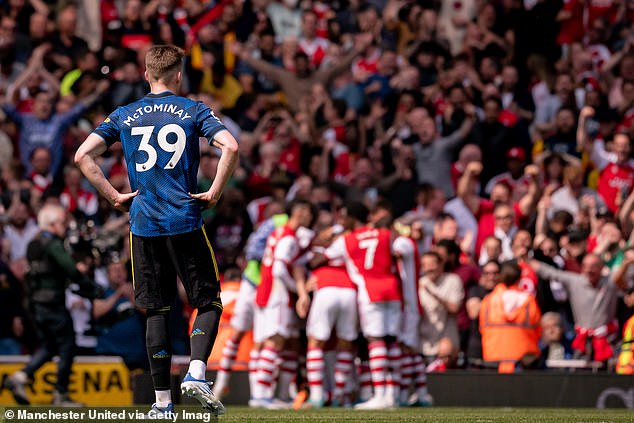 ‘When the new coach comes in we need to be ready for everything, we need to be so dialled in and concentrated on our jobs that we impress him.

‘It is a bit of balls in your performances. That is what it comes down to, the fundamentals of football. It is difficult for me to speak right now because there are so many emotions. It comes down to the basics and we never do them well enough in big games recently.’

Former United midfielder Scholes said on DAZN: ‘It’s an absolute mess. It’s a disaster of a dressing room. I had a quick chat with Jesse the other day and I’m sure he won’t mind me saying he said the dressing room is just a disaster.’

When Scholes’s revelation was put to Rangnick following their fifth defeat in eight, he said: ‘Obviously after games like today, or after Liverpool or Everton, there is massive disappointment in the locker room, for sure, this is normal. 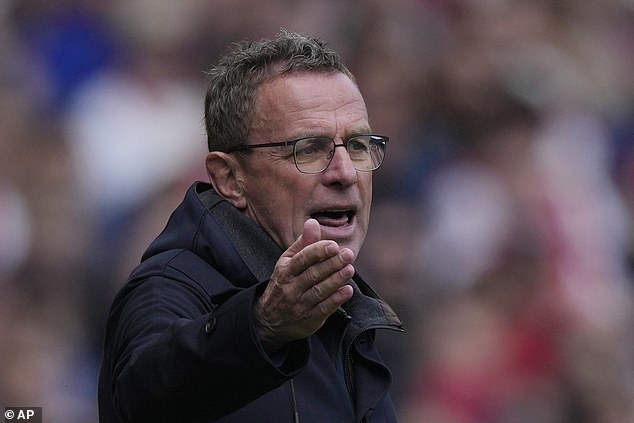 ‘It would rather be a problem if this was different. This is for me normal but I think the whole group get on reasonable with each other, I’m not daring to say they get on well with each other. I don’t see there is an issue in regard to the locker room.’

Rangnick, though, did concede United’s morale was on the floor after being left with little to play for. They are now six points off fourth-placed Arsenal having played a game more.

‘You look at the table, Tottenham and Arsenal, it’s not very realistic to dream and talk about top four,’ he said.

‘It’s a question again of pride, a question of honour, we owe that to the fans, we have two home games against Chelsea and Brentford.

‘The defeat to Atletico destroyed a lot of hopes and also the emotions of some of the players which I can understand. 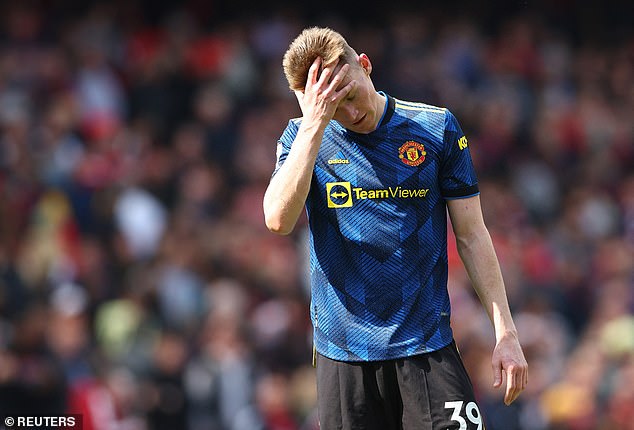 ‘That very moment caused a negative reaction in the group and the draw against Leicester and defeat at Everton also had some effect.’

United’s defending, once again, was poor before all three Arsenal goals but Diogo Dalot hit the woodwork twice and they had a number of other opportunities to score more than the one goal they did from Cristiano Ronaldo, his 100th Premier League strike.

Rangnick also claimed a host of VAR decisions went against them.

He said: ‘We were pretty unlucky with three or four questionable VAR decisions after seeing video footage in the locker room.

‘There was a handball issue in the first-half, Jadon Sancho [and Cedric Soares] was involved. 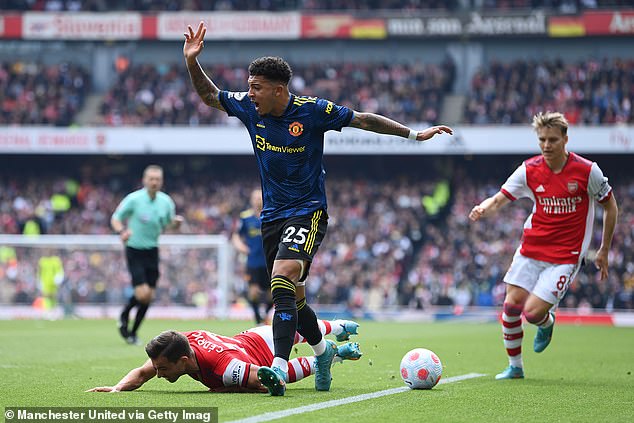 ‘The second goal of Cristiano was not offside and you can even see it in that total perspective exactly in one line.

‘Their third goal was clearly offside, I spoke to David de Gea after the game and he said to me he just couldn’t see the ball because [Eddie] Nketiah was in between Granit Xhaka and himself. They checked it but for whatever reason still gave the goal.

‘Anthony Elanga was arm-in-arm with [Tavares], the other player with him. At least, also questionable. The other three situations were clear.

‘This is why we have a VAR and you should expect the VAR plus the referee, if they’re checking situations they come to the right decision.’ 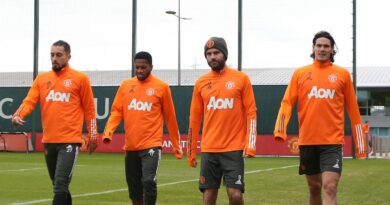