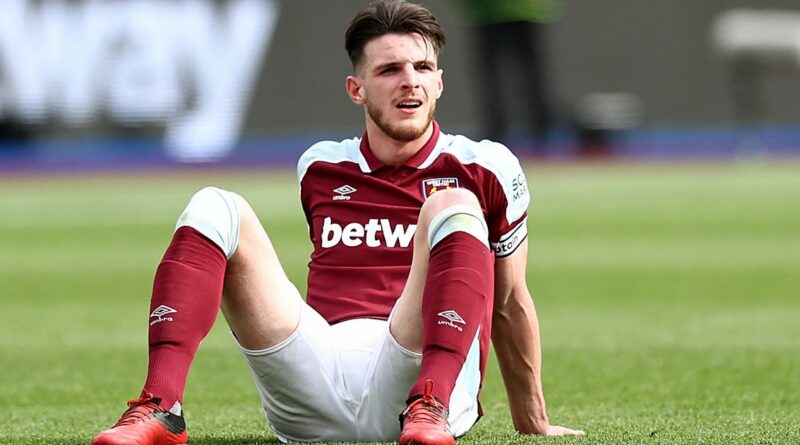 Fans think that Declan Rice is about to leave West Ham United after he was missing from the club's kit launch.

The Hammers released their new home kit for the upcoming 2022/23 season with several of the club's stars posing for a photoshoot wearing the new strip. However, Rice was absent from the pictures, further fuelling speculation that he could leave the club before the end of the summer transfer window.

Rice has been linked with Manchester United, Chelsea and Manchester City in recent months and has reportedly knocked back West Ham's attempts to extend his contract, which expires in 2024.

Fans were quick to notice Rice's absence from the kit launch on Thursday morning and flocked to social media to speculate whether his time at the club was coming to and end.

One confused supporter tweeted: “No Rice. Hmmm.” Meanwhile, another fan added: “Someone’s missing from these photos.”

A third fan wrote: “An indication that Rice will leave this summer.” One other supporter also tweeted: “So Rice missed these shoots thinking he will get a transfer.”

Rice made 50 appearances for David Moyes' side last season as they again qualified for European competition by finishing seventh in the Premier League.

Will Declan Rice leave West Ham United this summer? Let us know in the comments section below.

He also captained the side in the absence of club legend Mark Noble and has become a key member of Gareth Southgate's England squad in the last 18 months.

All that has fuelled talk he could be set for a move to a top six club this summer, following prolonged links with the likes of Chelsea and United.

West Ham have repeatedly made it clear that Rice is not for sale this summer, with Moyes even slapping a £150million price tag on the 23-year-old, something his team-mates have mocked him for.

As for West Ham's new home kit, the shirt is a classic claret with a light blue trim on the end of the sleeves and the rounded collar. The shirt also features light blue and white features on the shoulders.