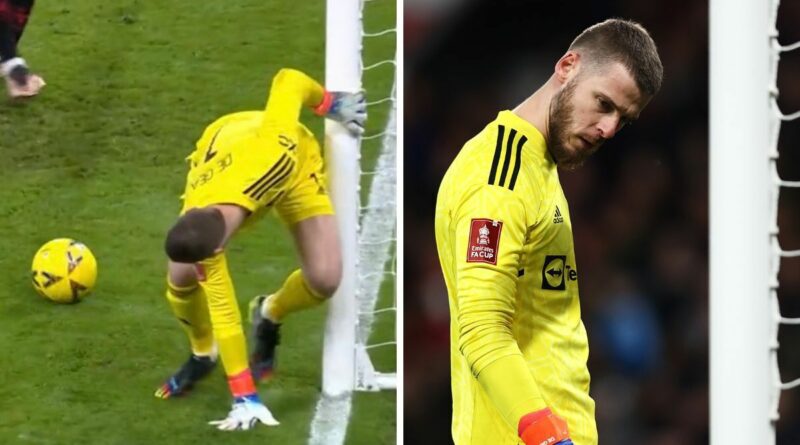 Diogo Dalot has revealed how David de Gea reacted in the dressing room after producing a humiliating error as Manchester United beat Everton in the FA Cup on Friday. The Red Devils are in the fourth-round hat, but it was far from smooth sailing at Old Trafford after De Gea’s moment to forget.

United looked destined to romp to another comfortable home victory to add to their inspired run of form after Marcus Rashford and Antony linked up to take the lead after four minutes.

But De Gea, who has developed his wider game under Erik ten Hag, endured a nightmare moment of madness to hand Everton passage back into the game.

Demarai Gray threaded a pass through to Neal Maupay, who slid to connect with the ball on the byline, beating Raphael Varane and seemingly catching De Gea off guard.

The Spaniard, holding onto his post to close the angle, couldn’t react quickly enough as the ball slipped between his legs for Conor Coady to tap home.

Dalot was closest to Coady but didn’t expect De Gea’s error and couldn’t clear first, setting up a nervy night for Ten Hag’s side.

In the aftermath, he has revealed what United’s No 1 told him off the pitch after his surprising error.

He said: “I spoke to David [de Gea] at half-time, and he didn’t expect the ball to go between his legs. Even I didn’t expect it, so I’ll take the blame. I could have reacted a little faster.”

Coady scored in the wrong net seven minutes after half-time, created by another left-footed cross from Rashford, to restore United’s lead.

VAR then rescued the hosts, ruling out Dominic Calvert-Lewin’s equaliser for offside on Gray, who was electric for Frank Lampard’s lowly visitors, in the build-up.

Rashford netted a goal of his own, a 97th-minute penalty to extend his scoring form to seven successive home games, rubber-stamping the victory.

Ten Hag will view the FA Cup and Carabao Cup as United’s best chance of silverware in his maiden campaign at the helm.

A top-four finish is the club’s Premier League priority, despite recent suggestions that a title charge could be brewing if his side seal positive results against Arsenal and Manchester City in their next two league outings.

De Gea and Dalot’s form will go a long way in securing those aims, and both will want to quickly forget the manner of Everton’s goal and continue United’s rapidly improving defensive record.