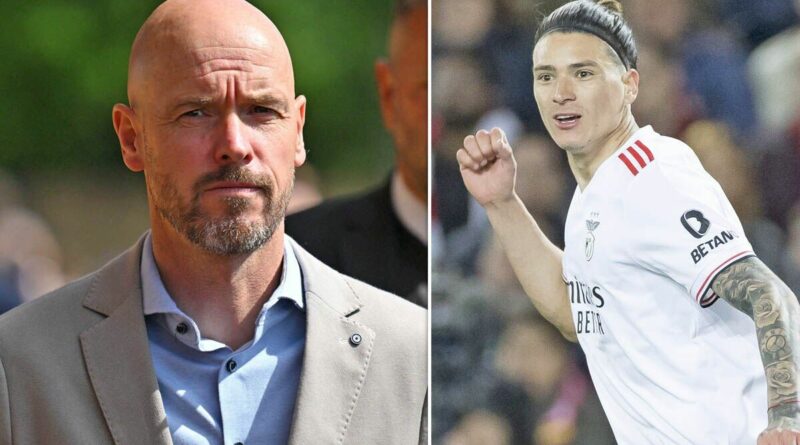 Manchester United boss Erik ten Hag is calm about Darwin Nunez joining Liverpool, it has been claimed. The Uruguay international had been a target for the Red Devils. However, the fallen Premier League giants ultimately opted against challenging their Merseyside rivals for the player’s signature.

Nunez’s move to Liverpool has been confirmed by Benfica, with the striker poised to play under Jurgen Klopp at Anfield.

And Fabrizio Romano, writing in his column for CaughtOffside, has claimed Ten Hag is relaxed about the Uruguay international, moving to Merseyside because a deal would have tested United’s ‘strategies’.

He said: “Erik ten Hag had mentioned the Uruguay international in his meetings with the Manchester United board, but he is not disappointed because he knows that spending a €100m package for the 22-year-old risked compromising the club’s strategies.

“Manchester United certainly tried to sign Darwin, and they were still in contact with his agent until Friday, but they considered Nunez a €70m target, not €100m.

“They will still look to sign a new striker, but a decision will also depend on who can leave the club, such as Anthony Martial.”

However, with the Brazilian more of a winger than a striker, that would go against what the transfer supremo has previously been told.

“Antony is a player appreciated by Erik ten Hag and certainly mentioned in internal conversations with the club this summer, as well as other former players of the Dutch manager – Frenkie de Jong and Jurrien Timber,” he said.

“Ajax are still waiting for official offers so far, and the Brazil international has been observed by Man United scouts even before they hired Ten Hag as manager.

“Other big sides in Europe are also well aware of his talent and potential.

“In my opinion, even if Sancho, Rashford and Elanga are already in the club, Antony would be an excellent signing for United or anyone else: he is an incredible talent who can make a difference.

“Of course, Antony is not a like-for-like alternative to a centre-forward like Nunez, and I’ve previously been informed that an out-and-out striker is a top priority at Old Trafford.

“Only time will tell if they look back and regret not paying the full fee for Nunez.”

As well as Antony, United have been linked with a variety of different forwards.

Richarlison is one of them, though Everton staying in the Premier League means they’re under no incentive to sell the Brazilian.

Robert Lewandowski is another option, even though he’s got his heart set on a move to Barcelona.

And United going for Sebastien Haller can’t be ruled out, despite the forward previously struggling in England with West Ham.

Meanwhile, former Liverpool star Robbie Fowler has expressed a belief Nunez can be a ‘masterstroke’ signing for his old side.

“With the record signing of Darwin Nunez looking all but done for Liverpool, what fascinates me is the presence of Manchester United amid the negotiations,” he said.

“I can guarantee the Anfield people would have been uneasy with that, as it has the potential to push up not only the price, but the wages too.

“No agent worth his salt wouldn’t use it to get a bigger contract, let’s be clear.

“But United being there in the background – for me – highlights just why this could so easily be another masterstroke for Liverpool in the transfer market, and it’s a point that is so often overlooked in the desperation to see new faces, new signings, new excitement.

“I don’t want to be cruel, but United could have written a book on how not to do transfers in recent seasons.

“Signing players just because you don’t want them to go to a rival? Check and double check.” 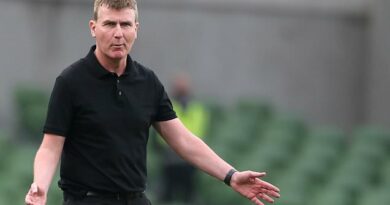 Stephen Kenny can't get the Republic of Ireland firing