Home » Soccer » Who are the Germany players out to break England hearts at Euro 2022? 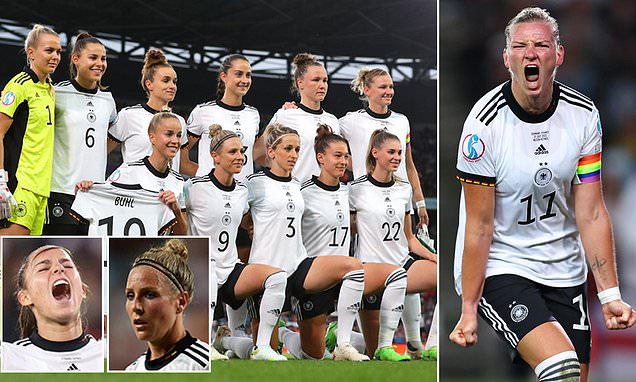 England’s Lionesses stand on the brink of history as they prepare for the Euro 2022 final at Wembley on Sunday.

Sarina Wiegman’s side have soared through the tournament on home soil and now only Germany stand in their way of ending the nation’s 56 years of hurt.

But the Germans have had quite the summer of their own. They made a statement of intent with a 4-0 win over Denmark in their opening group game, eased past pre-tournament favourites Spain four days later and didn’t even concede a goal until their semi-final against France.

Martina Voss-Tecklenburg’s squad features an effective blend of youth and experience and they will fancy their chances of winning the country’s ninth European Championship on Sunday.

Sportsmail provides the lowdown on the 23 players who are out to break England hearts. 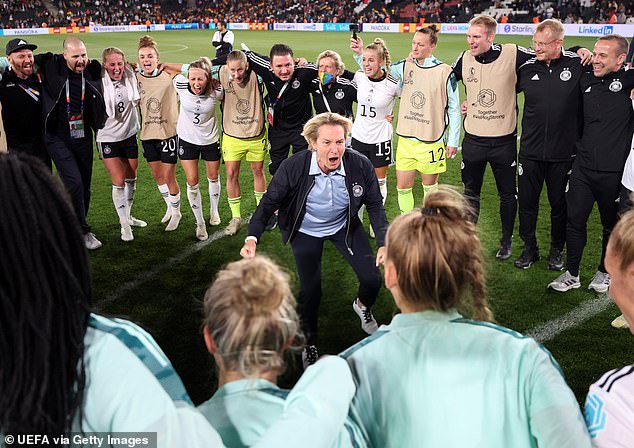 The only German to play every minute at the tournament so far, Frohms is the youngest of the three goalkeepers in Voss-Tecklenburg’s squad but has firmly established herself as the no 1.

The 27-year-old started her career at Wolfsburg where she won four league titles and two Champions League crowns and has agreed a deal to return to the perennial German champions this summer after spells at Freiburg and Eintracht Frankfurt.

Frohms, who conceded for the first time at the tournament in the semi-final against France, is an under-20 World Cup winner and saved two penalties in a shootout as Germany won the under-17 European Championship final in 2012. 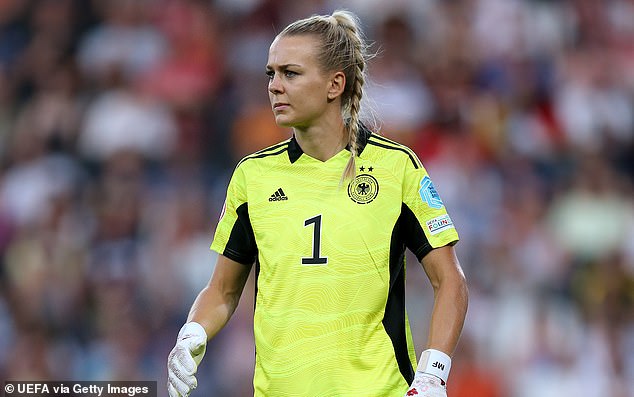 Usually deployed in midfield at club level by Bayern Munich, Gwinn excels as an attacking full-back in the national side and provided an assist for Sophia Kleinherne’s goal in the group stage win over Finland.

She has already amassed over 30 caps despite only turning 23 earlier this month and that tally would be higher had she not suffered a cruciate ligament injury two years ago.

Like Frohms, Gwinn already has a couple of international honours in her trophy cabinet. She was a Euros under-17 winner in 2016 and was named the young player of the tournament at the World Cup three years ago despite Germany exiting in the quarter-finals. 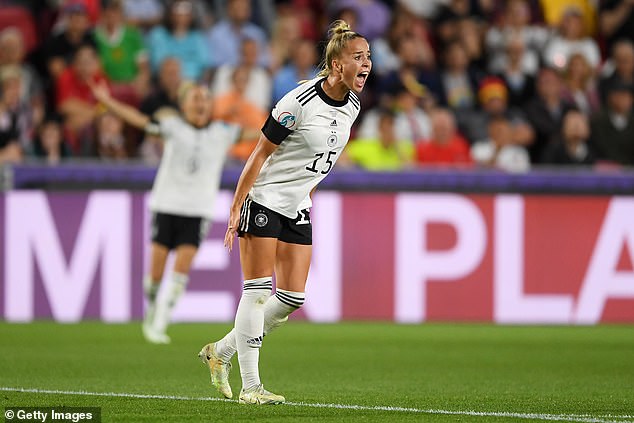 Hendrich was born in Belgium to a Belgian mother, but her decision to represent her father’s native Germany has paid off and she has been a vital part of the team’s sturdy defence at this tournament.

The 30-year-old has forged a reputation as one of the best defenders in the Bundesliga throughout her career with Bayer Leverkusen, Frankfurt, Bayern Munich and current club Wolfsburg.

A Champions League winner with Frankfurt seven years ago, Hendrich even popped up with an assist for Alexandra Popp when Germany beat Finland in the group stage. 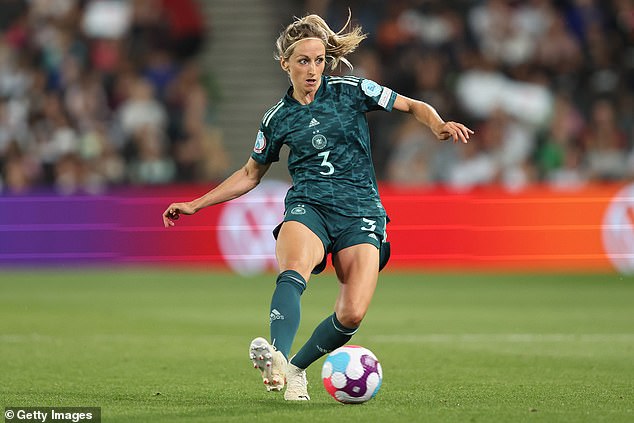 Hegering is the oldest player in the Germany squad at 32 years old but only has 25 caps to her name as she only made her senior debut at the age of 29. Since then, she has been an ever-present and played every minute at the World Cup in 2019.

The centre-back always had potential though. She helped her country win the under-20 World Cup on home soil in 2010 – a year after winning the Champions League with Duisburg – before a string of injuries almost forced her to retire.

Hegering has made the move to Wolfsburg this summer following two years at title rivals Bayern Munich and is already being lined up as a coach at the club after she retires. 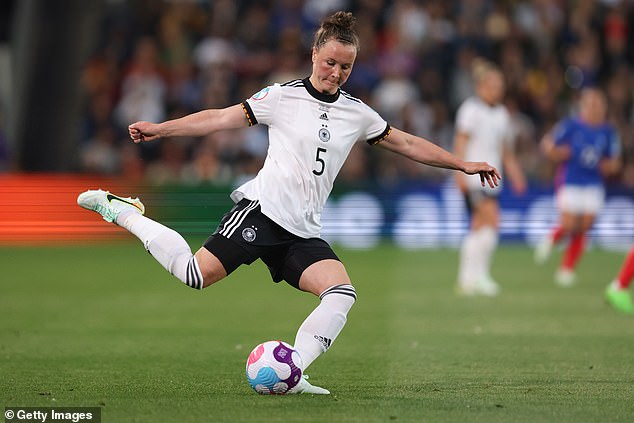 Much like Gwinn on the other side of defence, Rauch is hugely effective going forward and is particularly deadly from set-pieces – which may be a worry considering England have looked slightly shaky defending those situations.

The 26-year-old rattled the woodwork twice in Germany’s opening game against Denmark before providing the assist for Alexandra Popp’s goal against Spain with a menacing corner.

The third member of the back four to currently be on Wolfsburg’s books, under-20 World Cup winner Rauch is proving her worth at this tournament after missing out on the squad for the World Cup three years ago. 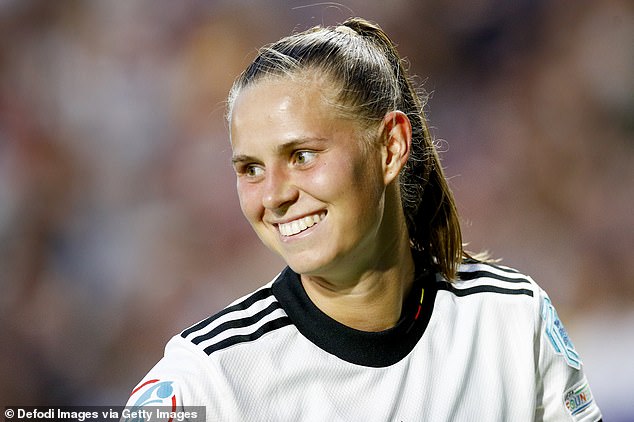 An intriguing midfield battle awaits between Oberdorf and Keira Walsh, arguably the two best players in their position throughout the tournament.

The Wolfsburg enforcer has made 20 successful tackles so far at Euro 2022, more than anyone else. She is still only 20 years old, having broken Birgit Prinz’s German record for the youngest player to feature at a World Cup in 2019.

Oberdorf’s talent was clear from an early age. She helped Germany win the under-17 European Championship in 2017 and was named as the player of the tournament. She should be a star of this team for years to come. 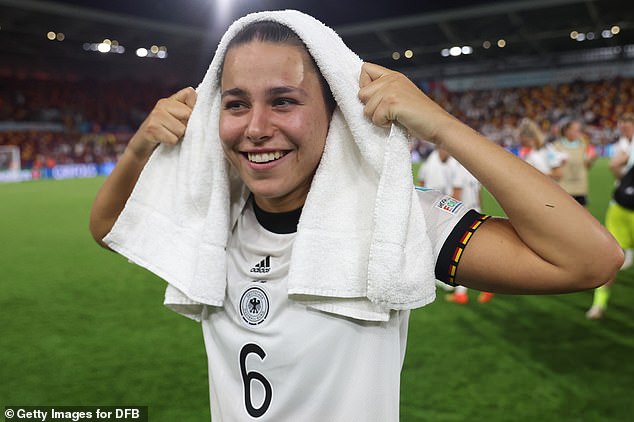 Lena Oberdorf has made 20 successful tackles so far at Euro 2022, more than anyone else

The jewel in her country’s crown. Dabritz made her senior international debut nearly a decade ago and is one of only two outfield players in the current squad to have been involved when Germany last lifted the European Championships in 2013.

She was only 18 then and therefore still young enough to win the under-20 World Cup a year later before also helping Germany win Olympic gold in 2016. The second-most capped player in the squad, it has become hard to imagine this team without Dabritz in it.

The 27-year-old is also one of only two players in the squad to play her club football outside of Germany. A Bundesliga winner with Bayern Munich in 2016, Dabritz moved to PSG three years ago and this summer has agreed a move to Champions League holders Lyon. 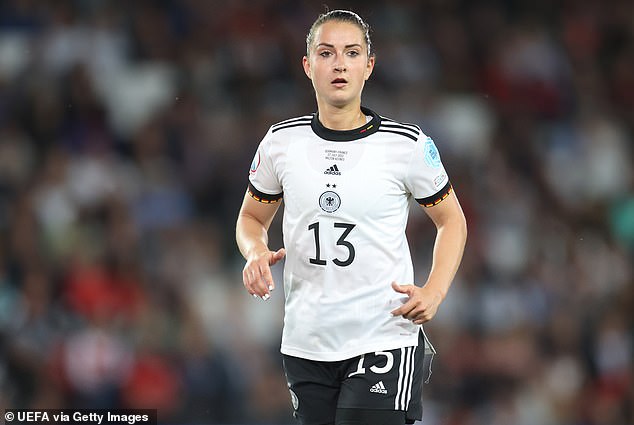 Magull set Germany’s tournament in motion with the first goal in their opening game against Denmark and also found the net in the quarter-final triumph over Austria.

Those two strikes have taken the 27-year-old’s tally for her country to 21 – only two players in the squad have netted more – and give her a rate of almost one goal in every three matches in a Germany shirt.

Another member of the under-20 World Cup-winning side in 2014, Magull won the Champions League twice with Wolfsburg but now plays for Bayern Munich, where she is captain. 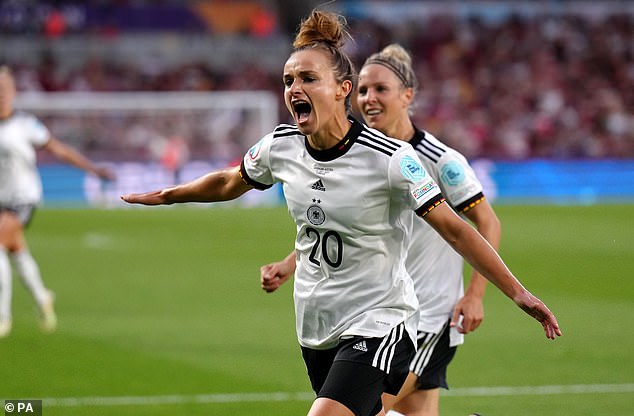 The other outfield survivor from Germany’s Euro 2013-winning squad along with Dabritz, Huth is one of the most experienced members of the squad having also won three Bundesliga titles, two Champions Leagues and an Olympic gold medal in her career.

A starter in all five games so far, the 31-year-old’s best performance came in the semi-final against France when she provided the assist for both of Alexandra Popp’s two goals with a pair of dangerous crosses in from the right.

Huth has been playing her club football for Wolfsburg since 2019 following spells at Frankfurt and Turbine Potsdam. Sadly she is no relation to Robert. 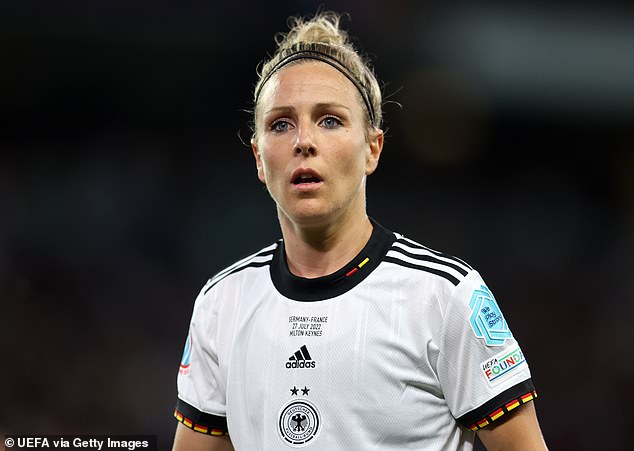 It remains to be seen whether Buhl will be able to play a part in the final after she tested positive for coronavirus earlier in the week and was forced to miss the semi-final victory against France.

The 21-year-old had started every match before that and opened the scoring inside three minutes in the 2-0 group stage win against Spain. One of Germany’s most exciting young prospects, Buhl would be a huge miss if she was unavailable at Wembley.

Despite her tender years, the Bayern Munich star is already pretty experienced. She made her Bundesliga debut with Freiburg at the age of 15, having helped Germany win the under-17 European Championship in the same year. 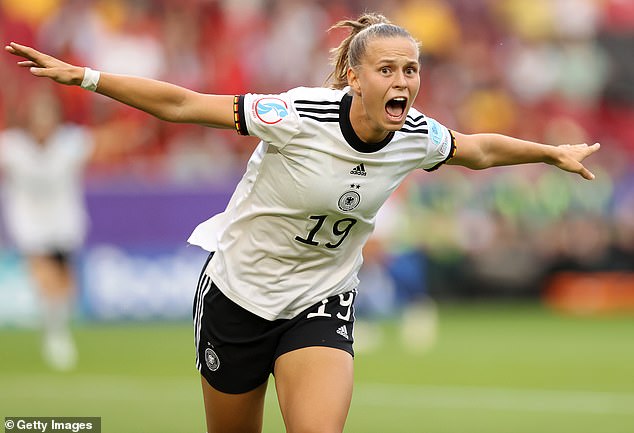 It’s fair to say that Popp has been making up for lost time at this tournament. Having agonisingly missed the 2013 and 2017 Euros through injury, the striker is the joint top scorer this summer with Beth Mead on six goals after becoming the first woman to score in five consecutive matches at the Championships.

The 31-year-old has both the most caps (119) and the most goals (59) in the Germany squad so it is no wonder she is captain and she has led by example with several imperious displays – her game-winning brace against France in the semi-final was a particular highlight.

Popp dazzles at club level too. This summer she celebrates a decade at Wolfsburg, where she has won two Champions Leagues, five Bundesliga titles and six German cups. 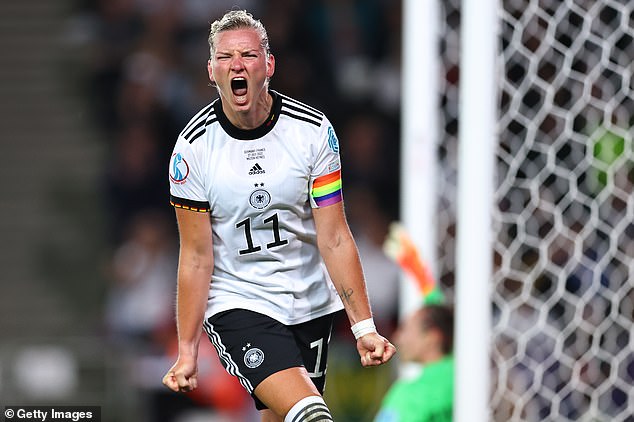 Brand started the semi-final in the absence of Buhl and will be in line to fill in again should the Bayern Munich forward still be unavailable. As replacements go though, they don’t come much better than the rising star of German women’s football.

Brand, 19, scored within two minutes of making her senior international debut last year and has since recorded five goals in 21 caps despite mostly being used as an impact substitute.

It was no surprise to see the winger secure a transfer to Wolfsburg earlier this summer, after she came through the ranks at Hoffenheim. 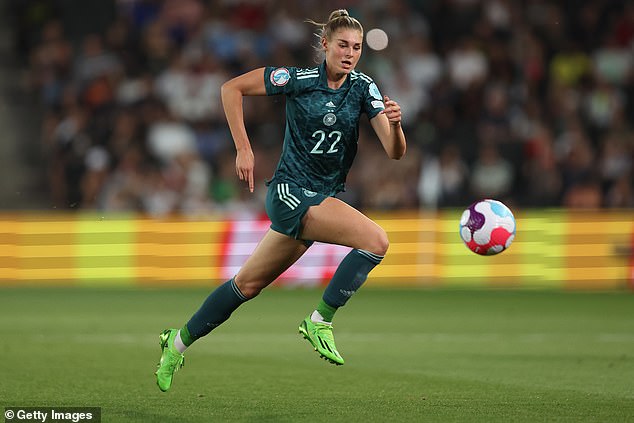 Dallmann has come on as a substitute in four of Germany’s five matches and started the other – the 3-0 win over Finland in the final group match.

In replacing Magull in the the semi-final, the 27-year-old reached the 50 cap milestone and only five outfield players in the squad have made more appearances.

Regarded as one of the most technically gifted players in the Bundesliga, the 27-year-old won the title with Bayern Munich in 2021 – the second piece of silverware of her career after she helped Germany lift the under-20 World Cup in 2014. 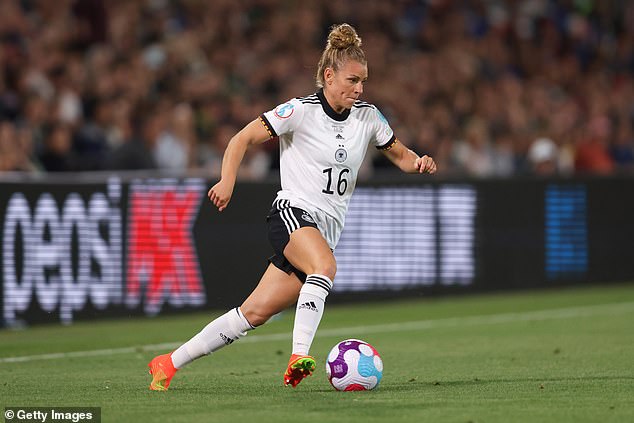 The semi-final victory over France was the first game at this tournament that Lattwein did not feature in, after making three substitute appearances and starting against Finland. She scored in the 4-0 win against Denmark.

The 22-year-old is another one of the Wolfsburg contingent, having joined the club last summer, and plays alongside Oberdorf in midfield in the Bundesliga.

Also capable of playing at centre-back or attacking midfield, Lattwein provides Voss-Tecklenburg with versatility if things are not going to plan on Sunday. 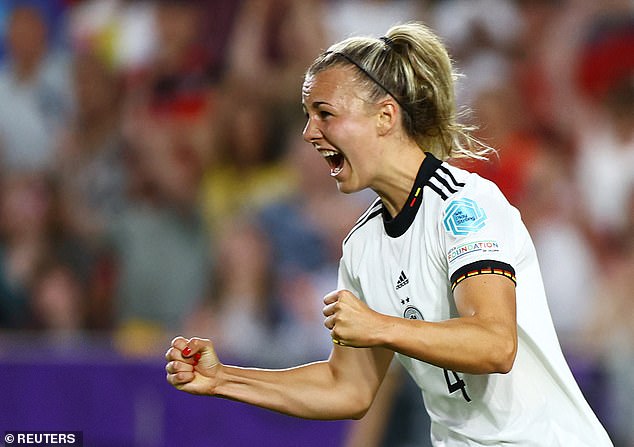 Also 22 years old, Lohmann has spent her whole career at Bayern Munich after making her Bundesliga debut at the age of 16 and helped the club win the title in 2021.

The midfielder has made three substitute appearances at the tournament so far and was one of the first names that Voss-Tecklenburg called upon from the bench in the semi-final when Germany were looking for a winning goal against France. They found it seven minutes after she was brought on.

Lohmann is aiming to add senior international silverware to her CV after being part of the Germany under-17 side that won back-to-back European Championships in 2016 and 2017. 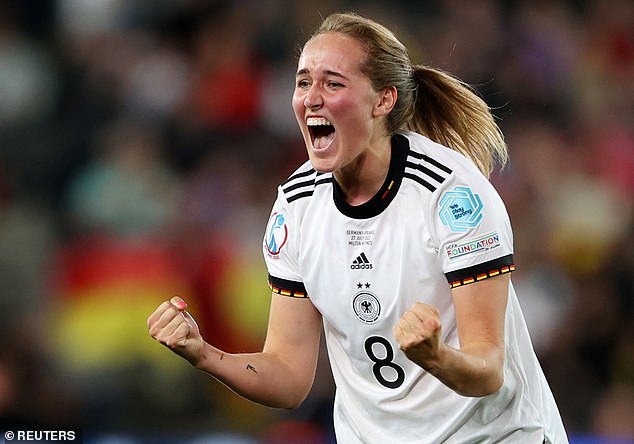 Before the tournament, Schuller was tipped as Germany’s biggest goal threat after finishing as the top scorer in the Bundesliga last season with 16.

The 24-year-old started and scored in the opening game win over Denmark, but then tested positive for Covid-19 and has not made it on to the pitch since being back available.

Only Popp has scored more international goals in the current squad than Schuller (26) though and it would be quite the return to action if she was a hero off the bench at Wembley. 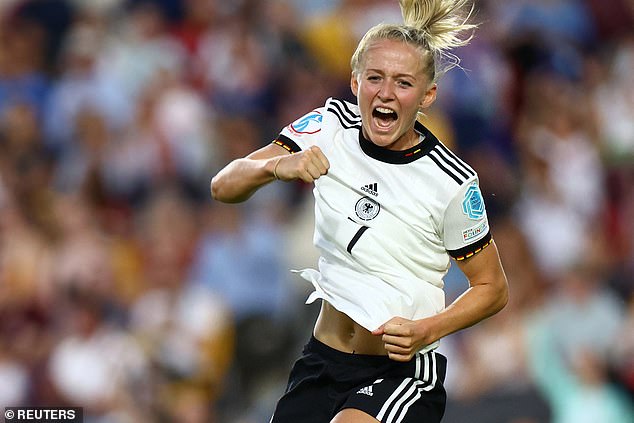 Frankfurt pair Sophia Kleinherne and Nicole Anyomi both scored in the group stage win over Finland when Voss-Tecklenburg rotated her squad, but have not featured since (well, Kleinherne came on as a 95th-minute substitute in the quarter-final).

Tabea Wassmuth (Wolfsburg), Sara Doorsoun and Laura Freigang (both Frankfurt) have all been giving fleeting minutes as substitutes, but nowhere near as many as they would have liked.

The only members of the squad who haven’t had any game time at the tournament are the two other goalkeepers – Chelsea’s no 1 Ann-Katrin Berger, who is the only England-based player in the 23, and Euro 2013 winner Almuth Schult. 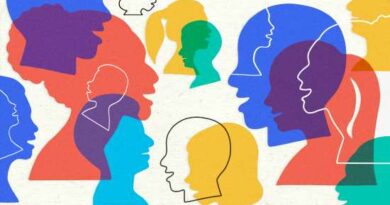