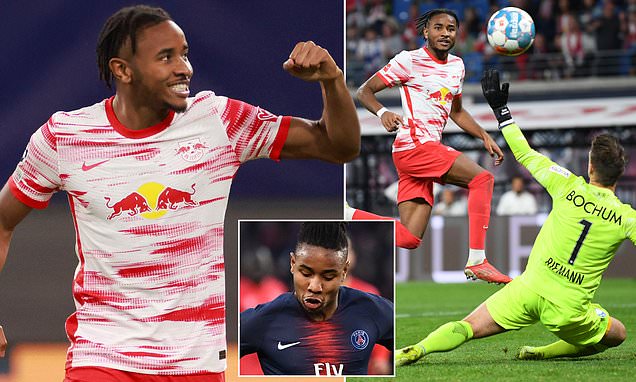 Christopher Nkunku is lighting up the Bundesliga and his hat-trick at Man City has Real Madrid calling… but who is the £40m-rated former PSG youth star who Leipzig boss Jesse Marsch claims ‘has no weaknesses’?

His Paris Saint-Germain career may have flopped but Christopher Nkunku has been taking the Bundesliga by storm.

Nkunku has been the bright spark amid RB Leipzig’s dismal start to the season. The playmaker has shone for the Bundesliga side as he enjoyed sensational performances to kickstart his 2021-22 season.

The Frenchman was probably left not knowing whether to laugh or cry after he scored a hat-trick but Leipzig eventually succumbed to a crushing 6-3 defeat. 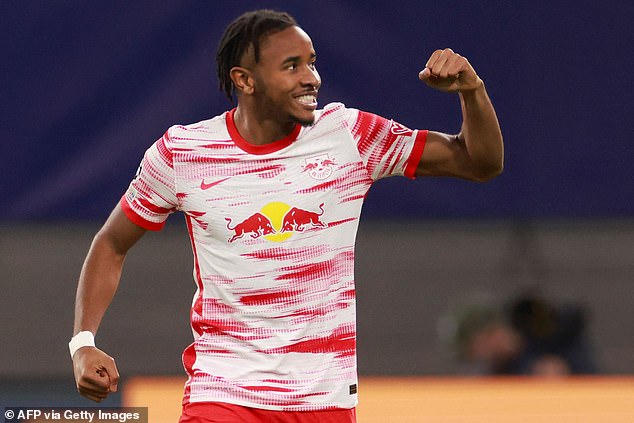 With two headers and an emphatic right-footed finish, the 23-year-old became the first player from Leipzig to score a Champions League hat-trick as well as the second player to do so against the Citizens, after only Lionel Messi – not bad company.

‘I scored three goals, but each time they immediately scored again,’ bemoaned Nkunku after a bittersweet night at the Etihad Stadium. ‘We needed to be better and stay focused.’

His prodigious quality hasn’t been limited to the Champions League, however, as he has found the net nine times and recorded three assists in 10 games in all competitions so far this season. 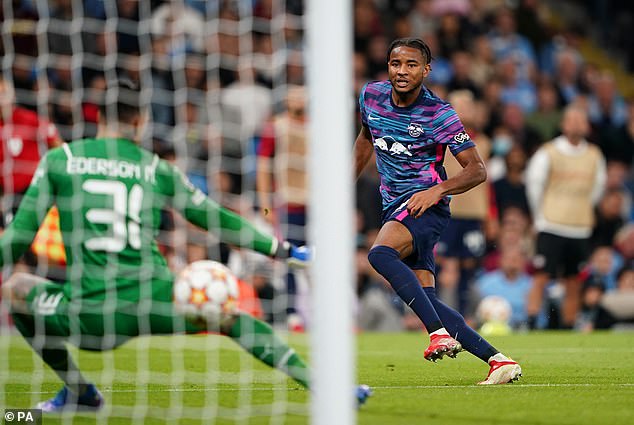 It’s no great surprise either that he has been on firing form, given his 12-goal and 27-assist contribution in 84 appearances over the past two seasons.

Nkunku can do business across the pitch as a No 10, No 8 or a winger. He began life as a winger, but has proved more effective through the middle.

There he can expand his range of passing options while maintaining his ability to dribble past his marker with quick feet and core strength.

With such versatility at his disposal, Red Bull boss Jesse Marsch has claimed that Nkunku has ‘no weaknesses’.

‘We have spoken to Christopher a lot about playing on the counter, and also what he needs to do to play as a striker, a No 10 and on both wings,’ Marsch said via the club website.

‘Christopher has no weaknesses. He is young and still wants a lot more. 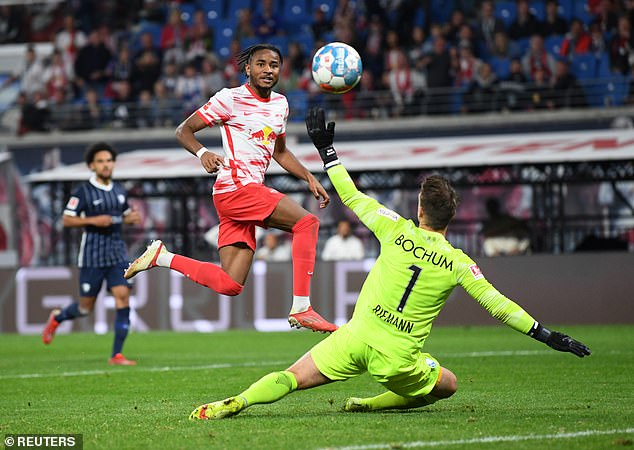 ‘It’s always a good thing when a young player listens to the things we say and also wants to implement them.

‘Working with him is a lot of fun as he is really intelligent and has a lot of potential.’

Unsurprisingly, his impressive Leipzig career has caught the attention of Europe’s upper echelons. An elite trio of Manchester City, Chelsea and Real Madrid are said to be chasing the Frenchman.

Real are the strongest contenders for Nkunku’s signature as Los Blancos have reportedly been offered the chance to sign the midfielder next summer.

According to Mundo Deportivo in Spain, Nkunku’s agent Pini Zahavi has contacted Real Madrid to sound out a potential deal at the end of the season.

Nkunku would have two years remaining on his Leipzig contract next summer and is valued at upwards of £40million. 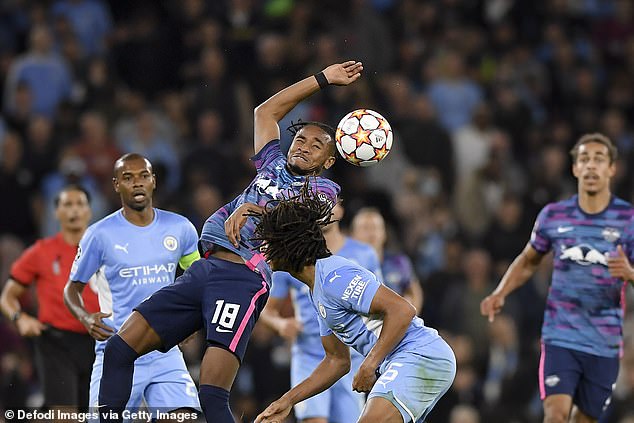 A sale would see Leipzig pocket a tidy profit after the German side bought Nkunku for just over £11m on a five-year deal in 2019 – a bargain in hindsight.

Leipzig have already seen two of their stable of French wonderkids leave the Red Bull Arena after Ibrahima Konate arrived at Anfield and Dayot Upamecano made the switch to Bundesliga rivals Bayern Munich this summer.

Now, Nkunku could be the next – but a reunion with former PSG boss Thomas Tuchel at Chelsea would not be his desired outcome.

Born in Lagny-sur-Marne, an eastern suburb of Paris – and in the same commune as Paul Pogba – Nkunku joined PSG at the age of 13.

Nkunku raced through the youth ranks in the French capital and graduated to the first-team ranks in the summer of 2015 under Laurent Blanc, alongside Presnel Kimbembe and future Leipzig team-mate Jean-Kevin Augustin. 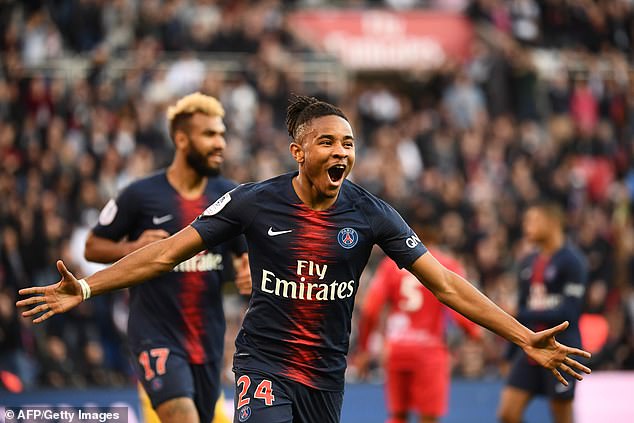 He was handed his first-team debut the following December, coming on for Lucas Moura in PSG’s Champions League clash with Shakhtar Donetsk.

In doing so, he became the Ligue 1 side’s sixth-youngest debutant at the age of 18 years, two months and 25 days.

Despite rivaling the likes of Adrien Rabiot, Marco Verratti, Angel Di Maria, Javier Pastore and Thiago Motta for a place in PSG’s engine room over his four seasons in the first team, Nkunku still managed to rack up 78 appearances in all competitions for the Parisians, sweeping up 10 trophies along the way.

In his final and most prolific season in the French capital, Nkunku made 22 Ligue 1 appearances, including 13 starts, chipping in with three goals and two assists.

But, amid the wealth of talent bejewelled by Neymar and fellow French starlet Kylian Mbappe, Nkunku’s PSG career never really took off.

Life at the Parc de Princes came to a halt in 2019 under Tuchel’s tenure, as he made the move to Leipzig with one year remaining on his PSG contract in search of playing time. 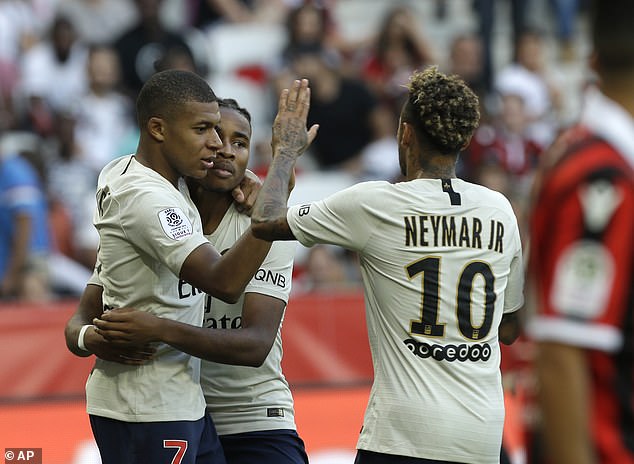 And the PSG product has previously blasted the current Chelsea boss for his role in his exit.

Talking to Canal Plus, he said: ‘The arrival of Tuchel made me think.

‘The fact of starting a season without really knowing what role you are going to have, it’s quite complicated. There comes a time when you come to the end of your contract and you have one year left, either you extend or you leave, I made the choice to simply leave.’

Nkunku will now face his former side as Leipzig travel to Paris for their Champions League group-stage clash.

Of Congolese origin, Nkunku represented France at Under-21 level but has yet to receive a call-up to the senior squad from Didier Deschamps.

The plethora of young French players deserving of an international call-up is almost sickening and the Red Bull star couldn’t fight his way into Les Bleus’ Euro 2020 squad.

But his impressive role at club level could count him in for the 2022 World Cup squad on the road to Qatar. 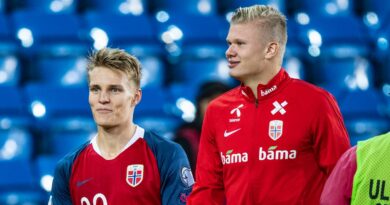 Arsenal could be directly impacted by Haaland transfer after Odegaard demand