Home » Soccer » Why a Socceroo took a private helicopter to Wembley 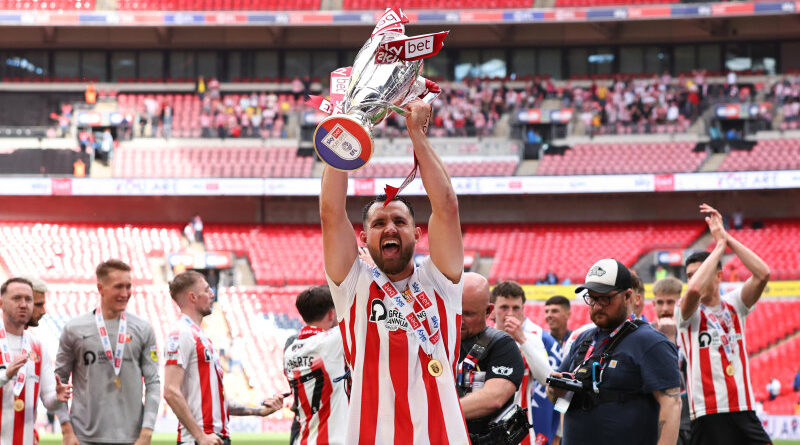 Hours after he was crawled up in the foetal position in a painful embrace with his toilet bowl, Bailey Wright was living it up in a private helicopter, chartered just for him, so he could make it to one of the biggest games of his career.

Life as a professional footballer can often be one of major contrasts, and that was very much the case for the Socceroos centre-half last month. He got to soak in the glory of greater London from his vantage point in the skies, en route to Wembley Stadium – but only after enduring a mystery illness which threatened to rule him out of Sunderland’s promotion play-off on May 22. 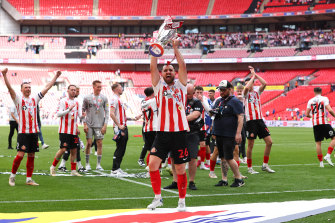 Recalled for Australia’s do-or-die World Cup qualification play-off mission in Doha next week, Wright will now be playing in England’s second tier next season after leading the Black Cats to a 2-0 win over Wycombe Wanderers, which sealed their spot in the Championship.

Wright has been a cornerstone of Sunderland’s defence in a season where they finally put a stop to the years-long tale of woe that was beamed into lounge rooms across the world. The popular Netflix series Sunderland ’Til I Die captured the inside story of their slide down the English football league pyramid and helped cement the trend for the fly-on-the-wall documentaries that now seem to be popping up everywhere. 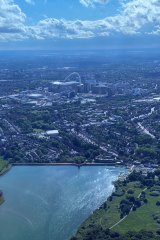 Bailey Wright’s glorious view of Wembley Stadium and surrounds, from his private helicopter.

But when Wright, 29, woke up in a cold sweat in the middle of the night and began vomiting, that happy ending – and his involvement in it – was in serious jeopardy.

“I just had absolute stomach pain and ache and was starting to get the sweats and fever, and the shakes,” Wright, who played 46 times in all competitions for Sunderland this season, told the Herald and The Age. “From there to lunchtime I was sick every half an hour and in bed, shivering and sweating. I was thinking, ‘How long could this be for? Why? Why is this happening now?’”

COVID was quickly ruled out, but the unidentified ailment rendered Wright unable to train on the eve of Sunderland’s most important fixture in several seasons. His condition improved marginally on the day before the match – enough for him to pull the boots on for a light session. But he had to be quarantined from his teammates, got changed next to his car instead of the dressing room, ate his meals away from the group, and dialled in remotely for their tactical discussions.

When they flew to London, Wright still couldn’t mix with them for fear of spreading the bug through the team, and so he was braced for a maddening six-hour drive through traffic to Wembley, and all the physical cramp that would come with it – until Sunderland went to the great expense of getting him a helicopter, testament to his importance to the club’s promotion push.

“I felt a little bit guilty, but it definitely saved me from getting out there feeling stiff,” Wright said.

“That was my first ever time in a helicopter, and I was sweating the whole way – any bit of wind I was [panicking]. My feet were planted … I’ve seen too many things in the news. It was actually quite cool, although the whole time I wouldn’t let go of any seatbelt or anything.

“I had a great view of Wembley, right through London. [We landed] at an equestrian centre by the Thames, and it was just like … people just galloping on their horses in the middle of London. I was like, ‘What is going on here? This is how the other half lives.’”

There were more than 46,000 fans at Wembley – where Wright also won the League One play-offs with Preston North End in 2015 – and the vast majority of them were clad in Sunderland’s red and white stripes.

“There’s something in the air about Wembley, it’s just like this moment where your whole career can be summed up in one,” he said.

“To be there and play there and win there … a lot of good players go their whole careers without getting the chance to play at Wembley and lift a trophy at Wembley, and thankfully, I’ve done it twice. And I hope there’s more to come because it just gives you that taste.

“The buzz of the stadium, the arch over it and the size of it – it is, I guess, the home of football. It was just class.” 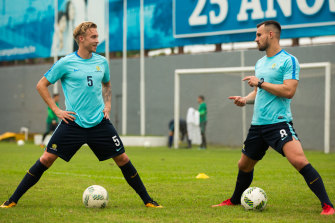 After injury wrecked the end of his stint with Bristol City, Wright joined Sunderland in January 2020 – just as the Netflix cameras that filmed their rapid descent from the Premier League to England’s third tier were switched off.

“I watched it myself – it shows you the size of the club, the passion of the fans. We had a historian come in pre-season and tell us why Sunderland means so much to the fans, and what the city had been through when the shipyards got closed down, and the mining industry shut down,” he said.

“People lost their jobs, they lost their incomes, and it was terrible for the city, but they always had their football club. When you understand that … when you play for the club, we then feel that. If we’re performing [badly], they certainly let us know. But when we do … God, did they get behind us.”

Now Wright is hopeful of channelling his personal momentum into the Socceroos, where he looms as a strong contender to start in their must-win clash against the UAE in the early hours of Wednesday [AEST], as well as their lead-in friendly against Jordan this Thursday.

If Australia beat the UAE, they will then face Peru in a winner-takes-all clash for a World Cup spot on June 14 in Doha.

As a regular fixture of the Australian team that got to the 2018 World Cup through the play-offs, and after steering Sunderland through a similarly fraught process, Wright has solid and recent first-hand experience of winning things the hard way.

“Everyone wants to qualify automatically, but doing things through the play-offs – I’ve done it at club level, I’ve done it qualifying for a World Cup, and I know many other boys have as well. It’s the best feeling ever when you do it,” Wright said. 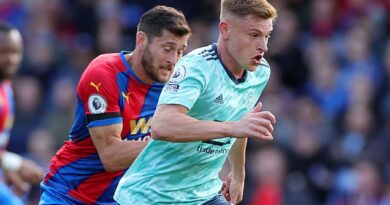 Barnes insists Leicester will 'kick on' after the international break