Football fans across Europe are stocking up on their energy drinks and pizza menus, as transfer deadline day looms

The summer window shuts at 11pm on August 31, and all of the biggest clubs in Europe will be in the market for some last-minute shopping.

With Lionel Messi joining Paris Saint-Germain, Jack Grealish becoming the first player to be bought by a Premier League side for £100m, and Harry Kane u-turning to stay at Spurs; this window has already conjured up some memorable moments.

However, there is no limit to the unpredictability of Deadline Day – Daily Star Sport looks at 10 of the wildest transfer deadline day moments…

Legend says the transfer window does not shut until Harry Redknapp has fired up his Range Rover and been interviewed by Sky Sports from the steering wheel of his motor.

The former Portsmouth and Tottenham Hotspur manager always did his best to help the reporters, many of which were outside the training ground from the early hours of the morning until late at night.

While he often kept his cards close his chest regarding transfers, he was always there to provide many transfer memories while leaning outside his window.

Any sports journalist can tell you how chaotic and hectic deadline day is.

But the ones who genuinely have the most to say about the unpredictability of deadline day are the reporters of Sky Sports News.

Reporters are generally vulnerably placed outside of all the clubs’ stadiums and training grounds, where they are to the mercy of football fans with a desire to make their own deadline day moment on the camera.

Andy Sky Sports News’ Mark McAdam was unfortunately placed when a football fan threw a blow-up sex doll in front of him, while he was doing a live piece to camera,

The journalist did manage to keep his cool despite the unfortunate incident.

While McAdam kept his cool, an Italian journalist outside Stamford Bridge in 2016 completely lost his cool.

Having been harassed by a supporter poking an inflatable banana in his ear and in his face, the Italian snatched the inflatable from his hand and proceeded to hammer him with it Basil Fawlty style.

All of this happened while he was still live on camera, solidifying the incident as one of the funniest Deadline Day moments of all time.

Norwich City fans pretending to have sex in 2013

Reporters could be explaining the biggest transfers of the window into the camera, and viewers would still be distracted by what is going on in the background.

Unfortunately for former Sky Sports reporter Kate Riley, she had to explain what was happening for Norwich, while two fans appeared to dry hump each other behind her.

The two Norwich fans pushed up on each other against the gates, while an oblivious Riley continued with her piece to camera.

Which transfer deadline day moment do you remember the most? Comment below

In what is perhaps the most infamous botched transfer in deadline day history, former West Bromwich Albion striker Peter Odemwingie tried to take matters into his own hands.

When informed by his agent of a possible move to Queens Park Rangers, the Nigerian striker fired up his car and drove down to the capital.

When he arrived, he was regrettably informed a fee had not been agreed, and he was left waiting for hours in the car park.

The striker claims a deal and buy-out clause had been agreed, but the move was ended as Julian Hoilett could not join the Baggies in the other direction.

In 2015, Sky Sports reporters all simultaneously breathed a huge sigh of relief, as they were allowed to be positioned within the grounds of football clubs.

This decision came after a poor Sky Sports reporter was embarrassed by an Everton fan.

The Toffees supporter menacingly bounded up behind him and thrusted a big, blue sex toy into the reporter's ear canal live on TV.

Fans were saddened by this decision as fans gathering behind the reporters was an iconic deadline day image.

But when all things considered, they probably understood the decision.

In 2015, Real Madrid’s interest in David De Gea was arguably the biggest transfer story of the summer.

Their prolonged chasing of the Spaniard looked to have finished with Los Blancos signing their man.

However, just when they thought the deal was done and dusted, a dodgy fax machine put a stop the move by…well stopping.

United claimed this had prevented vital documents from reaching The Bernabeu, meaning Real were unable to register him before the 10pm deadline.

Both United and the 13-time champions blamed each other for the deal failing to go through, and De Gea had to stay at United and he is still at Old Trafford to this day.

From a playing perspective, Robinho’s move to Manchester City was a disaster.

However, City’s shock capture of the samba star from Real Madrid, was a major statement announcing the Citizens meant business.

Within days of being taken over by their current owners, City broke the British transfer record on the Brazilian, forking out £32.5m.

It paved the way for the influx of talent which has since strolled through the doors of the Etihad Stadium.

Transfer Deadline Day is unforgiving to football clubs who have left their business to the last minute.

Leicester City found this out the hard way when they thought they had successfully signed midfielder Adrien Silva for £22m.

Unfortunately for The Foxes, they had submitted the documents to FIFA 14 seconds too late and the midfielder had to wait till January to play his first match.

There was a time when Saido Berahino was one of the most promising talents in English football.

He had performed so well for West Bromwich Albion, Tottenham Hotspur expressed an interest in signing the youngster.

However, West Brom chairman demanded £25m and Spurs chairman Daniel Levy baulked at the price tag and pulled out of the negotiations.

A furious Berahino then took to Twitter and said: Sad I can’t say exactly how the club has treated me, but I can officially say I will never play for Jeremy Peace.”

His career stagnated and plummeted from there, as he was soon sold to Stoke City where he failed to score a single Premier League goal in 28 appearances – he now plays for Belgian side SV Zulte Waregem.

On The Debate: Matt Upson, Ian Holloway and Danny Mills 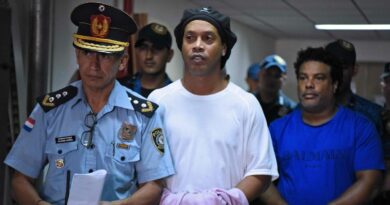 Ronaldinho’s rollercoaster life after football including prison and bankruptcy