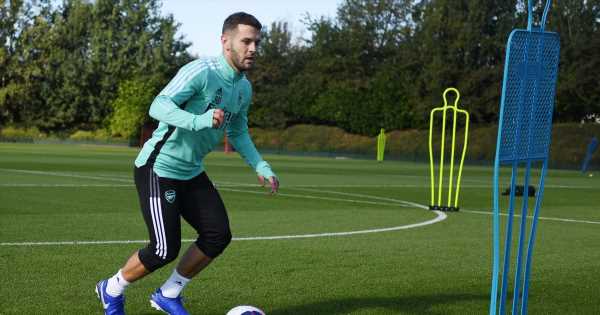 Jack Wilshere has returned to train with Arsenal while the former Gunners academy product considers his next move after leaving Bournemouth.

Once considered the rising star of the English game, Wilshere has been battered by a succession of injuries over the course of his career.

Those injury issues mean that clubs have not been keen to offer the midfielder a contract, despite the fact he is currently a free agent after leaving the Cherries at the end of last season.

With Wilshere still struggling to find a club more than a month after the summer transfer window ended, Arsenal boss Mikel Arteta has now invited him back to the club to maintain his fitness.

The move to bring back Wilshere was revealed by Arsenal on Thursday when the club released images of the 29-year-old in training.

And Gunners boss Arteta has spoken of his delight at seeing his former team-mate return to the club where he made his senior debut.

“What you should believe is that we want to help Jack prepare for his next stage, physically, mentally,” Arteta told Arsenal.com.

Should Arsenal give a contract to Jack Wilshere? Let us know in the comments section…

“He wants to do his coaching badges again and we are prepared to fulfil all the needs that he wants. That is basically the idea and it is no further than that. I am very happy to have him back.

“We had a conversation with Jack and understand the needs that he has, the period that he is going through and I think everyone at the club agreed it was the right moment to help him.”

Arteta also believes that Wilshere can help to improve the younger members of the Arsenal squad, with the Spaniard hailing his “great influence” on those players.

“We sat down with him and we listened to what he wanted to do and what stage he is and we are prepared to do anything we can to help him,” Arteta added.

Jamie Carragher tripped up by his own Twitter challenge