Jordan Henderson, Harry Kane and Bukayo Saka struck as England weathered a slow start to breeze to victory against the African champions. France cruised past Poland 3-1 earlier in the day, with Mbappe scoring a wonderful brace after Olivier Giroud became the nation’s all-time top goalscorer.

After an exhilarating group stage, the last 16 hasn’t produced any curveballs in the opening two days – the Netherlands, Argentina, France and England have progressed as expected. But Monday could produce the first underdog triumph of the knockouts when Japan face Croatia at 3pm.

Japan will be confident of navigating past the 2018 finalists into the quarter-finals after beating Germany and Spain on their way to topping Group E. World Cup favourites Brazil are also in action at 7pm, facing South Korea after their stunning late progression from Group H ahead of Uruguay.

Southgate reacts to England vs France

England manager Gareth Southgate has reacted to England’s next test after setting up a World Cup quarter-final against France on Sunday.

Southgate has admitted he’s wary of the ‘step up’ Les Bleus pose but expressed his confidence in how far his squad have come in recent tournaments.

He said: “We know this is a step up from what we’ve had so far. But the team have garnered so much experience in the last few years, they’re playing with confidence, and we look threatening.

“We’re scoring goals, and another clean sheet is lovely to see. We’re in a good place, but we know the level of the opposition as well.”

England will face reigning champions France in the World Cup quarter-finals after their dominant 3-0 win against Senegal on Sunday.

The African champions were the better team in the first 30 minutes, but Gareth Southgate’s side took control for the remaining 60.

Jude Bellingham was instrumental for England, first setting up Jordan Henderson’s opener before playing a pivotal role in Harry Kane’s first goal of the tournament on the brink of half-time.

Bukayo Saka added his third of the campaign in the second half to book a date with Mbappe and co on Saturday.

The 23-year-old forward has refused to endorse anything alcohol or gambling related in Qatar, including one of the tournament’s sponsors, Budweiser.

However, he has confirmed that he will pay any fine that comes the FFF’s way for his refusal to speak to the media.

He said: “People have been asking why I haven’t appeared in front of the media. I just needed to focus on the tournament and on football.

When I want to concentrate, that is how I do it. I heard the FFF is going to get fined, so I will pay it, as I don’t think the FFF should pay on my behalf.”

But no time to waste. It’s another day of World Cup action and there are two more quarter-final spots up for grabs later.

Stay tuned for regular updates throughout your Monday! 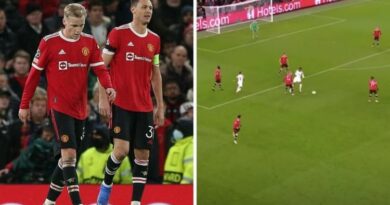