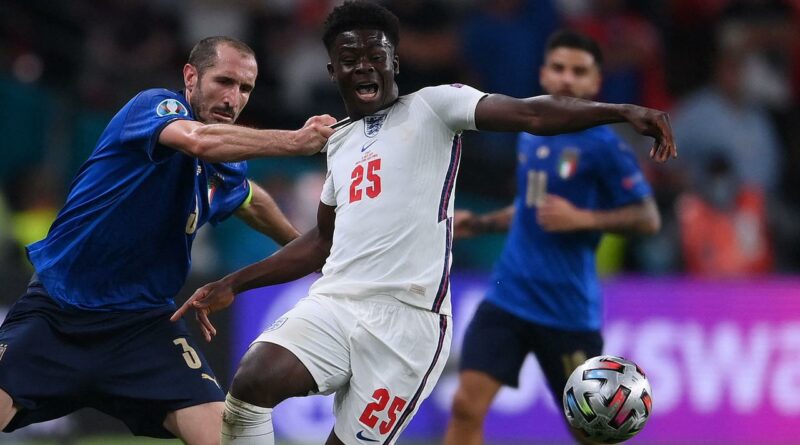 Italy’s historic European Championship victory has been tainted by acts of shameless gamesmanship that have become instant memes.

The Italians emerged from an epic penalty shootout with a 3-2 win, breaking England’s hearts in the cruellest of fashions.

Italy has now tasted Euro success for the first time since 1968 — but it is a result that has stuck in the throats of commentators across Europe.

A series of cynical acts went by with the referee too hesitant to issue direct red cards, despite fury from fans demanding fouls from some of Italy’s biggest stars to be punished with instant dismissals.

Giorgio Chiellini got hit with a wet lettuce leaf for this challenge.Source:Getty Images

Instead Italy recovered from an early 1-0 deficit to win the thriller with the last kick of the game.

England made the perfect start to the Euro 2020 final, going 1-0 up inside two minutes before the visitors hit back midway through the second half with a goal of their own to send the match down to the wire.

At fulltime the score was locked at 1-1 before an agonising extra time where neither team could break the deadlock.

In the end it was Italy’s nerves of steel under pressure to win the match in penalties.

GIANLUIGI DONNARUMMA IS THE HERO!

Tears of joy from Roberto Mancini as the Azzurri are overcome with emotion.

After a save from Gianluigi Donnarumma on Saka, it was all over. But not without a mountain of controversy.

A cynical foul by veteran Italy captain Giorgio Chiellini just before the end of normal time had England fans up in arms, blatantly dragging down Bukayo Saka by grabbing his shirt to prevent the 19-year-old from zooming past him.

It was illegal, but smark from the senior statesman, and ensured his side didn’t risk conceding at the death. Chiellini received a yellow card for his effort, but plenty of England supporters were asking for a harsher punishment.

How about the tackle on Bukayo Saka?

The care-free bravado with which Chiellini executed the shameless foul resulted in the challenge turning into an instant meme.

Italian star lucky to stay on the field

Italy continued to ride its luck in extra time when midfielder Jorginho escaped with a yellow card for an ugly tackle on English substitute Jack Grealish.

The two players dived in for a loose ball which Grealish reached first, only for Jorginho to stomp on his leg in the middle of Grealish’s shin.

Jack Grealish goes down injured after being fouled by Jorginho.Source:Getty Images

Both players then rolled around on the floor in apparent pain.

Replays showed just how bad Jorginho’s studded challenge was — and enraged some fans, who called for a red card and instant dismissal.

📸 – Tackle from Jorginho on Grealish. pic.twitter.com/PoBjxE65Mp

Should Jorginho have been sent off for this tackle on Grealish? 🤔#ENG#ITA#Euro2020pic.twitter.com/cM5J1QiwAi

Italian fans finally had reason to cheer when their team equalised in the 67th minute. Jordan Pickford made a tremendous save from a goalmouth scramble after a corner but the ball rebounded off the post to the feet of Leonardo Bonucci, who poked home Italy’s first goal.

Earlier, England scored the fastest ever goal in a Euro final after just one minute and 57 seconds when Luke Shaw drilled a half volley into the back of the net, his first international goal.