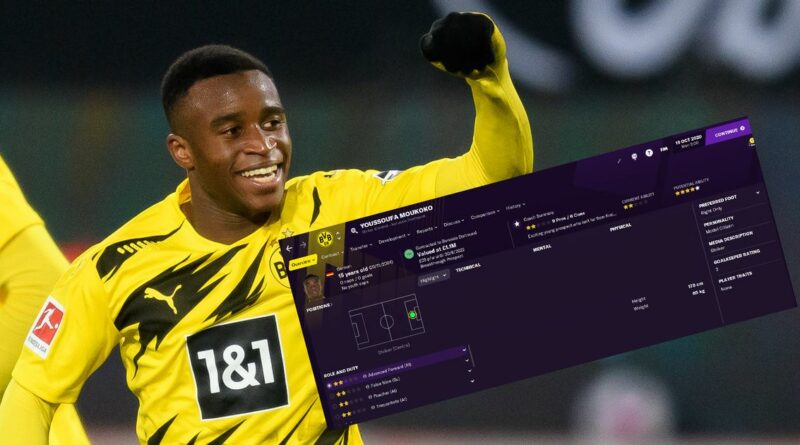 FM21 was initially released on November 24, 2020 for PC, Mac and mobile. Historically, Sports Interactive release their Winter Update in February each year for every yearly edition of the game, which includes all the updates transfers from across the world from the January transfer window and sometimes, a few gameplay updates too.

So, in the Football Manager 2021 Winter Update, you can expect transferred players like Martin Odegaard, Sebastian Haller, Moussa Dembele, Ozan Kaban, Ben Davies, Dominik Szoboszlai, Morgan Sanson and Luka Jovic all to feature for their new clubs on the updated winter FM21 database.

* Click here to subscribe to Level up! The Esports and Gaming Show on Apple Podcasts, Spotify, Google Podcasts and Spreaker.*

It's quite rare for players to be added to a Football Manager game as part of a Winter Update, but one of the reasons players could be added at this point is due to their age, which is exactly what has happened with Borussia Dortmund youngster Youssoufa Moukoko.

The young striker has built up a reputation as one of the best youth talents around, scoring 141 goals in 88 games for Borussia Dortmund’s youth teams. The youngster broke the record for the youngest ever player to appear in the Bundesliga and became the youngest ever Bundesliga goalscorer with a goal against Union Berlin in January.

But the striking prodigy was only 15 years old when FM21 was released, and due to Bundesliga rules that stipulate only players aged 16 and over can appear in league matches, the youngster wasn't added to the game upon release.

However, with Moukoko now 16 and having played 12 Bundesliga matches for Dortmund, scoring twice, since November, the youngster has been added to FM21 as part of the Winter Update. But, you won't be able to register the player until the Bundesliga's second registration window!

You can check out Moukoku's player profile on FM21 in the screenshot below.

As you can see from his profile, it's clear that the youngster is an extremely talented youth prospect on the game.

However, we do have to point out that, after we took a deep dive into the new Winter database using the FM21 Editor, the following attributes are set to 0 and randomised in every new FM21 save; Aggression, Corners, Crossing, Dribbling, Free Kicks, Long Shots, Long Throws, Marking, Passing and Penalty Taking.

So on FM21, Moukoko has the potential to become better than Lionel Messi, Cristiano Ronaldo and others to become the best player in the world, if he reaches his full potential that is. The only other player to have a potential ability of -10 on FM21 is Rennes midfielder Eduardo Camavinga, so he's the joint-best wonderkid on the entire game.

Will you be looking to sign Moukoko on FM21 after the Winter Update?

The Football Manager database currently contains data on more than 800,000 individuals and 45,000 active clubs, with data sourced from their international on the ground scouting network which numbers roughly 1,000 people, among their ranks are some who are involved in football in professional capacities, including scouts and coaches.

In addition, each annual iteration of Football Manager has built-in algorithms which check for outliers and data discrepancies.

Data accuracy is further ensured by input from contributors who are active within the professional game (players, agents etc.) who provide regular feedback.

'I am definitely at the Euros': Kane plots return for Spurs in APRIL