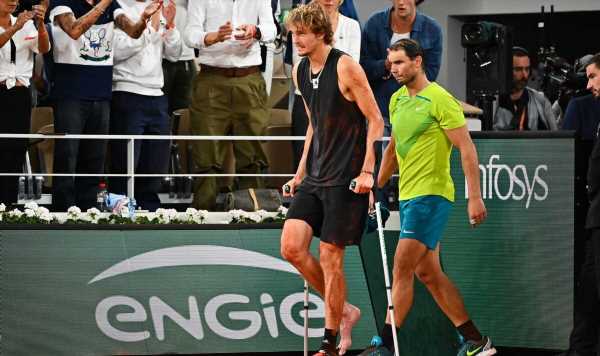 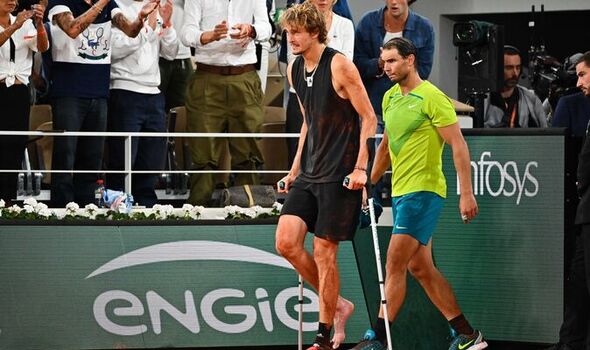 Rafael Nadal was left “subdued” despite reaching a 14th final at the French Open when Alexander Zverev was forced to retire their semi-final with injury. The Spaniard defied odds to make the final weeks after limping off court with his chronic foot injury in Rome but did not celebrate his victory given the freak circumstances of his opponent’s injury.

Zverev went down as the second set reached 6-6 and could immediately be heard screaming and crying out in pain, having injured his ankle. He was taken off court in a wheelchair before re-emerging on crutches to officialy retire the match and thank the crowd, trailing at a set at 7-6(8) 6-6.

And Tim Henman has now claimed the nature of the match’s conclusion left the 13-time champion “subdued” after reaching a 14th final in Paris on what is his 36th birthday. “You feel terrible, and to hear Rafa so subdued, through to a Grand Slam final on his birthday – you’d think there would be huge elation – to finish that match in those circumstance is disappointing for everyone but especially Zverev himself,” the former British No 1 said on Eurosport.

Nadal himself paid tribute to his opponent in his on-court interview and shared how difficult it was to witness the 25-year-old crying in the off-court medical room before they both came back to the court to shake hands.

“DIfficult to say a lot of things today in the situation,” he said during his on-court interview. “I mean of course for me as everybody knows [to] be in the final of Roland Garros one more time it’s a dream without a doubt but at the same time [to] finish that way, I have been there in the small room with Sascha before we came back on court and [to] see him crying there, it’s a very tough moment so just all the best to him and all the team.”

Henman also shared his well-wishes for Zverev, admitting that he hoped it wouldn’t be a serious injury with Wimbledon now three weeks away. The German is also guaranteed to be the top seed at a Grand Slam for the first time if he can recover in time to compete at the All England Club, as he will rise to a career-high of world No 2 on June 13, sitting behind Daniil Medvedev who is banned from the tournament.

“He is going to be absolutely devastated, competing at such a nice level, the tennis was incredible, the athletic ability, the movement – in that split second you catch the side of your foot and the ankle goes,” the former world No 4 said.

“There is going to be damage, you just hope it is not going to be too bad and that it’s a sprain rather than breaking a bone.”