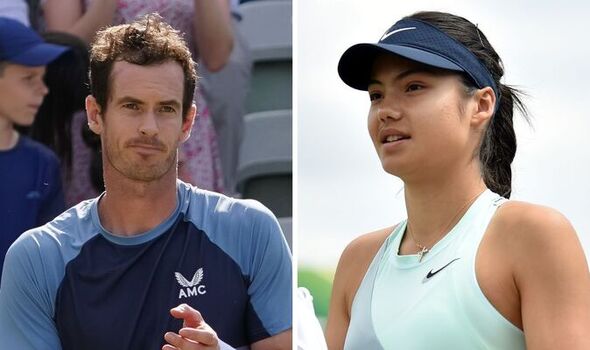 Andy Murray has urged the media to be cautious in judging Emma Raducanu “too harshly” ahead of her return to Wimbledon. It was 12 months ago when Raducanu was still relatively unknown to the average tennis fan.

But she burst into the limelight in her debut at Wimbledon last year, making it all the way through to the second week of the tournament. A few months later, Raducanu was a Grand Slam champion at the US Open in one of the most remarkable and historic achievements in modern tennis.

But the 19-year-old has struggled to continue that form ever since, failing to win three consecutive matches with injuries also taking its toll. She now faces a race against time to prove her fitness to play at Wimbledon, which starts on Jun 27.

Raducanu has also gone through a string of coaches since winning the US Open and even turned up to the French Open without a coach altogether. The teenager has faced some criticism in recent months, but Murray has pleaded for the media to take it easy on his compatriot as she continues to get used to the rigours of the tour.

JUST IN: Federer schedule latest with star to miss Wimbledon but record safe

Murray said: “We will make mistakes and say the wrong thing at times but just maybe don’t judge us too harshly when we do that and I’m sure that would help Emma a little bit. Just let her be who she is, and you know, she might say some things that are a joke or that she maybe doesn’t mean or whatever.

“I think there needs to be a level of trust and respect between the player and the media. I also had problems early in my career where maybe certain things that I said got taken out of context or jokes that I might have made turned into big stories and big headlines where it turned things a bit sour and negative.”

Murray made a strong start to the grasscourt season after reaching the semi-final of the Surbiton Trophy. And he followed that up with an impressive run at the Stuttgart Open, beating both Nick Kyrgios and Stefanos Tsitsipas on his way to the final.

He forced a deciding set against Italian Matteo Berrettini, but was unable to finish the job for his first title since 2019. But Murray picked up an abdominal strain in the final, forcing him to withdraw from Queen’s this week.

The former British No 1 still hopes to be fit for Wimbledon and still might play an exhibition at the Hurlingham Club in London next week.

“After having a scan this afternoon, an abdominal injury means I won’t be fit to compete at Queen’s this year,” Murray said. “The tournament means a lot to me, and it’s disappointing not to compete, especially after playing some good matches on the grass already.”

SEVEN things we learned at this year's US Open