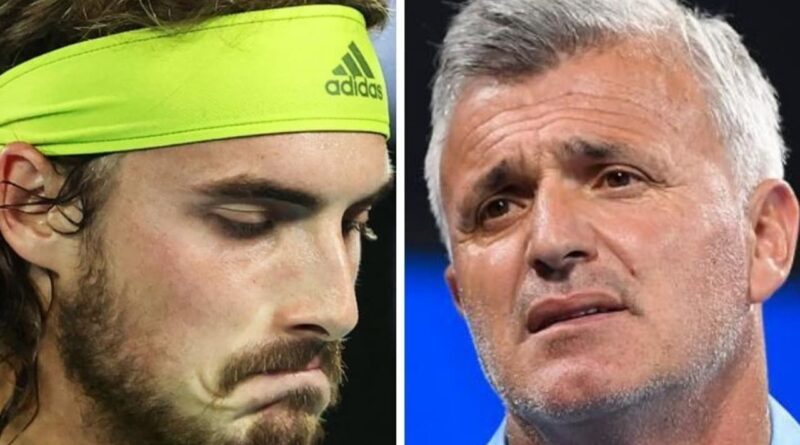 Daniil Medvedev is into his second grand slam final after thumping Stefanos Tsitsipas in straight sets to book a clash with Novak Djokovic in the Australian Open decider.

Tsitsipas performed a miracle by coming back from two sets down against Rafael Nadal in his last match but the Greek star couldn’t repeat the dose on Friday night, looking hopelessly devoid of answers as his Russian opponent obliterated him with ease 6-4 6-2 7-5.

“Definitely not easy. You saw the match with Rafa. I got a little bit scared and tight because it’s the semi-finals of a slam,” Medvedev said. “I’m really happy to be in the final.

“Sunday will be against one of the other greatest (players) … we’re going to see Sunday, we can’t know before the match what’s going to happen.”

Speaking on his match-up with Djokovic, Medvedev added: “He’s never lost in eight times in the final here. It’s him who has all the pressure.

“He has, for sure, more experience, but more things to lose than me.

“So I just hope I’m going to get out there and show my best tennis. I can beat some big names if I play good.”

The third set was as tight as the match got, Tsitsipas breaking for the first time as Medvedev committed some uncharacteristic unforced errors. The pro-Greek crowd was weighing in too, cheering wildly for the Tsitsipas and booing the Russian, prompting umpire James Keothavong to weigh in.

He rebuked the raucous crowd, reminding spectators to remain quiet while the ball was in play to be fair to both players. But there wasn’t enough love in the stadium to spur Tsitsipas towards victory, as a breathtaking backhand passing shot down the line saw Medvedev break again for 6-5 and he made no mistake, serving out the match

Medvedev fell short in the 2019 US Open final but will be out for redemption when he gets his chance to play for major silverware on Sunday night against Djokovic.

As British tennis reporter George Bellshaw tweeted during the one-sided affair, Medvedev was in “frightening” form as he dominated from start to finish on Rod Laver Arena.
“Gloriously brutal beatdown … just mentally breaking Tsitsipas,” Bellshaw wrote during the second set.

Medvedev’s serve was untouchable all night. He sped through games on his own racquet and physically was a step above Tsitsipas, who looked flat and fatigued — no doubt partly because of his marathon over Nadal on Wednesday night.

Medvedev’s court coverage was first class and his ground strokes crisp as much of the match was played from the baseline. The world No. 4 was full of cheek, too, complaining to the umpire about his rival’s father and coach, Apostolos.

“His father is talking way too much, man,” Medvedev told Keothavong.

Nothing Tsitsipas’ camp could say would change the result as he fell short at the death of yet another major.

Medvedev was on another level.Source:AFP

Both players had little trouble holding serve to start the match, things progressing evenly towards 2-2 before Medvedev landed the first significant blow by breaking first for a 3-2 advantage.

Sections of the pro-Greek crowd at Rod Laver Arena booed Medvedev at times, but they must not remember how hostile crowds spurred him to the US Open final in 2019.

To be fair, the boos were hardly going to blow the roof off, but the cheers that erupted every time Tsitsipas won a key point made it clear who was enjoying the majority of the support.

Sports writer Zenia D’Cunha tweeted: “The extremely pro-Tsitsipas, Greek-flag waving crowd at #AusOpen — literally booing Medvedev — might give him US Open 2019 flashbacks and we all know how that turned out!”

The Russian wasn’t fazed, going on to maintain his break advantage and win the first set 6-4

Medvedev maintained the rage in the second set, breaking early to keep his stranglehold on the match.

He went up 2-1 with a break, prompting Tsitsipas to throw his water bottle on the ground at the change of ends, only for water to spray all over the court.

He received a soft verbal warning from the umpire and play was delayed while ballkids cleaned up the court — but a smug-looking Medvedev asked why the Greek star didn’t receive an official warning.

Medvedev was winning his service games with ease, rattling off rapid points while Tsitsipas struggled to achieve the same dominance off his own racquet.

Medvedev’s hot streak continued as he secured a double break to go up 5-2 then breezed through another service game to take a two-sets-to-love lead.

Nothing was going right for Tsitsipas.Source:AFP

It was a similar case in the third set as Medvedev raced to 3-1, but failed to claim a double break then wobbles to hand Tsitsipas his first break of the match, levelling things up at 3-3.

The Greek ace was finally finding his groove