Tennis Australia and Australian Open chief Craig Tiley has responded to claims that he’s helped cover the legal and travel expenses for Novak Djokovic. The world No 1 is playing no part in the first major of the year after losing his court case on Sunday.

It brought an end to what proved to be an ugly 11-day standoff on whether he would compete in the tournament over his Covid vaccine exemption.

Djokovic flew home on Sunday night and reports soon began to emerge on the cost of legal fees the Serbian faced.

The Daily Mail claimed this week that Tennis Australia had “agreed” to pay his reported $500,000 legal fees.

But Tiley has now broken his silence on those reports, categorically denying they have helped fund Djokovic in any way.

“I have seen those reports today and we don’t really go into detail on financial arrangements that we have with the players,” he told Channel 9.

“But those reports are simply untrue.”

Tiley has come under fire for his handling of the Djokovic situation having previously back in November stated that all players travelling to Australia would need to be vaccinated before changing his mind.

When asked whether in hindsight, would he do anything differently this year, Tiley said: “Well every year, we get to the end of the Australian Open and there’s two champions who hold the trophies up.

“We go back and we bring the whole team together and we review what we did during the year.

“We do that primarily so that we can plan towards 2023 in this case. We spend weeks together reviewing what we’ve done, what did we do well, what we could do better, what do we need to change.

“That’s a process we go through every year and this year will be no different.”

The 60-year-old was then asked whether he would consider resigning, to which he said: “No.

“We put a statement out recently and I’m very focussed today on delivering a great event.

“We’ve had four days of unbelievable tennis and great entertainment and will continue to have that for the next 10 days.” 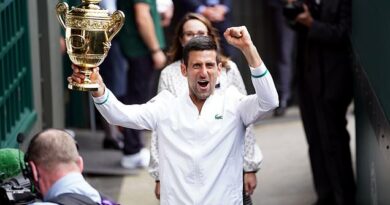